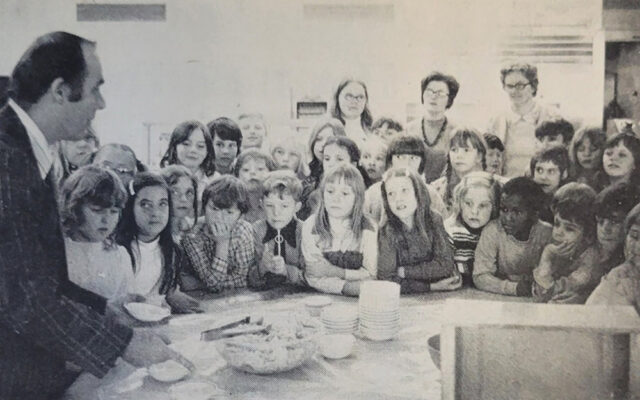 Yvonne Tardie • January 13, 2023
100 Years Ago - Jan. 11, 1923 Aroostook County in fine condition — The County of Aroostook in excellent financial condition. Except for a bond issue of $76,000 which was made the previous fall, the county does not owe a dollar. This bond issue was floated entirely to pay The County’s part of the expense of installing bridges in The County under the bridge law, which was expected to be repealed at the Legislature.

Aroostook County in fine condition — The County of Aroostook in excellent financial condition. Except for a bond issue of $76,000 which was made the previous fall, the county does not owe a dollar. This bond issue was floated entirely to pay The County’s part of the expense of installing bridges in The County under the bridge law, which was expected to be repealed at the Legislature.

Miss 1948 — Presque Isle’s “Miss 1948” was Myrna Evelyn Howes, daughter of Mr. and Mrs. Isaac Howes of Ashland, who was born at 12:25 a.m. on New Year’s Day. She was the first arrival of the four babies born at the local hospital the first day of the new year. Dr. Storer W. Boone was the attending physician. Following its annual custom, the Estella Shop presented gifts of a dress, a sweater, and dress hangers to little Miss Howes  as the first New Year’s baby.

First in 1973 — The Presque Isle area’s first baby of the year 1973 arrived on the scene late New Year’s Day. Kristopher Lee Kelley came into the world at the Arthur R. Gould Memorial Hospital  at 11:07 p.m. Jan. 1. The eight-pound boy is the son of George and Virginia Kelley who resided in the Caribou Trailer Park in Caribou. It was the couple’s third child.

$1,000 contribution — Another large contribution to the A. R. Gould Memorial Hospital Building Fund came in when “Hotel Charlie” Stephans turned over $1,000 to the fund on behalf of the Northeastland Hotel. A few days before, Potato Services, Inc., contributed $5,000, the largest single contribution. The building fund monies went toward the new expansion wing that was under construction at the hospital.

State police promotions announced — Two Presque Isle area men were included in 13 promotions within the Maine State Police, according to an announcement by Col. Parker F. Hennessey, chief. Sgt. James W. Brown, 50, of Houlton became commander of Troop F at Houlton. He had been a patrol supervisor in Troop F since 1958 after serving two years in the same capacity in Troop D following his promotion to sergeant. A native of Gardiner, Brown enlisted in 1950 and first patrolled the Wells area before moving to the Orono area patrol of Troop E a year later. Sgt. Joseph R. Dumond, 50, of Fort Kent had been promoted to commander of Troop E at Orono. A native of Fort Kent, he enlisted in 1952 and had been assigned as a patrol supervisor there since being promoted to sergeant in 1964.

Baby new year — Joseph Eric Boone was the first baby born in 1998 at The Aroostook Medical Center in Presque Isle. He was born at 5:48 a.m. to Raymond and Lisa Boone, both of Presque Isle. The baby weighed 8 pounds, 15 ounces.

Donation — Representatives of American Drug Stores, Inc. were on the campus of the University of Maine at Presque Isle to conduct interviews. While there, they presented Bonnie DeVaney with a $1,000 check for the Career Services Center. The donation was made in appreciation to the university for the effort put forth by John Harrington and the business faculty the previous year that resulted in the hiring of five graduates who had been very successful in ADS’ management training program. Some of those present were Brett Ramsdell, regional manager and recruiter; Steve Thibeau, store manager and recruiter; Bonnie DeVaney, director of the Career Services Center and Kelley Chasse, work study in career services.

Next year's Caribou City Council will include a new member and a longtime councilor thanks to Tuesday's election.
Pets END_OF_DOCUMENT_TOKEN_TO_BE_REPLACED

Nearly anyone who has ever had puppies or dogs can relate to “The Zoomies.” The zoomies are defined as those sudden bursts of pent-up energy that cause dogs to run at breakneck speeds back and forth or around and around, or sometimes in a tight little circle.
What's Happening This Week END_OF_DOCUMENT_TOKEN_TO_BE_REPLACED