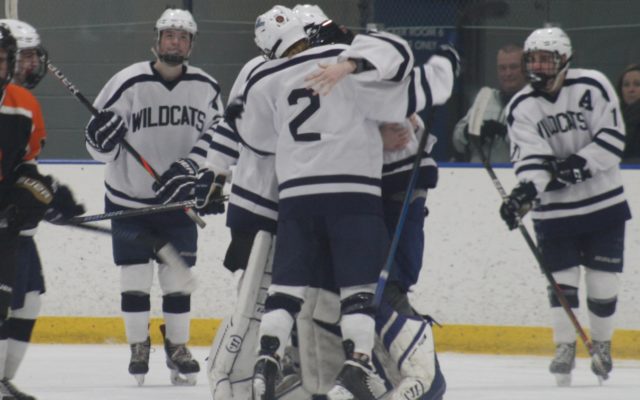 Presque Isle advanced to the Class B North semifinals, where the No. 4 Wildcats (13-5-1) will face off against No. 1 Hampden Academy 6 p.m. Friday at Colby College in Waterville.

In Tuesday’s quarterfinal the Wildcats trailed 3-1 with 10:30 left in the third period but lived to skate another day thanks to three goals over a four-minute span. 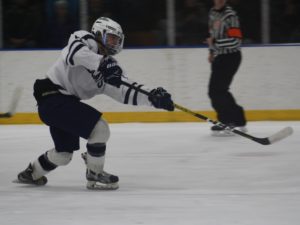 For No. 5 Gardiner (11-8), senior Ryan Kimball had two goals and senior Jake Weston had one goal. Sophomore Cameron Rizzo chipped in with two assists.

Wildcat coach Carl Flynn said that coming so close to defeat had been fraught. Yet, he said his team had mounted a successful comeback because of its strong offense and humble attitude.

“We’ve got a group of kids on this team that — a lot of them have won a state championship in soccer already,” Flynn said. They’ve been winners their whole lives and they don’t give up.”

Roy, who said it was “a bit of a scare” to have the season come so close to ending, said he was happy with how his team played. He looked forward to the next round.

“It’s going to be a tough game Friday,” Roy said. “But we just gotta keep this momentum going.”

With powerful performances from Levasseur and Jonah, among other players, LeTourneau said his team had simply had it in them to beat Gardiner.

“We came out really fast in the first, kind of slowed down in the second and picked up momentum up in the bottom of the third despite having less shots,” LeTourneau said. “I thought our momentum was really good.”

Presque Isle’s offense, which averaged six points a game during the regular season, struck early with a goal from junior Colby Carlisle about six minutes in.

Yet, The Tigers’ dominant defense, which itself averaged only two points against during the regular season, quieted the Wildcats offense after that. Presque Isle did not score another goal until the third period.

Presque Isle’s defense, which was robust, but not as powerful as its offense during the regular season, kept Gardiner at-bay. Presque Isle junior goalie Brandon Poitras saved 31 out of 34 shots, only allowing one goal in the first two quarters. 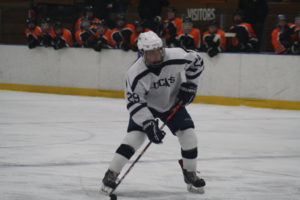 Things seemed to turn against Presque Isle in the third. With the game tied at 1-1, two minutes in, Kimball had his second goal of the day. A little more than two minutes later, Gardiner built on its lead with a goal from Weston.

With only about 10 minutes left in the game, the Wildcats were now down 3-1, against a Tigers defense that had kept Presque Isle’s Class D-leading scorers at-bay throughout.

But two minutes later, Levasseur, a defensive player, scored with an assist from DeMerchant. Only a minute later, Roy got in on the action, scoring another goal to tie it up 3-3.

Shortly after, with about seven minutes left in the game, LeTourneau sealed the deal with a goal, becoming the fourth individual Presque Isle player with a goal in the match.

The score was now 4-3 and would remain so for the rest of the game. As time dwindled, last minutes attempts by Gardiner to tie it up were halted by saves from Poitras.

It was a freezing day across The County, but you could hardly tell from the turnout. Even after a massive surge in absentee ballot requests across the Central Aroostook area, droves of people came out to vote in Presque Isle, Mapleton, Washburn and Fort Fairfield.
Pets END_OF_DOCUMENT_TOKEN_TO_BE_REPLACED

Most parents of cats agree that they adore their feline friends because of the weird things cats do.