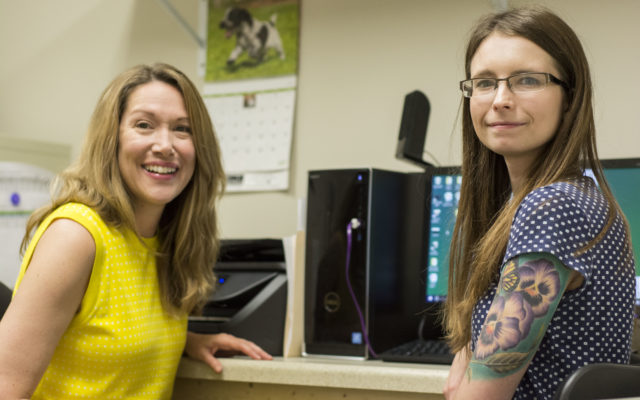 The business moved to Eagle Lake in 2012 after the Frenchville planning board did not renew its permit to operate in that community. Now, the Eagle Lake location is strictly used to grow and cultivate medicinal marijuana while the Caribou location is Safe Alternative’s only dispensary. The central Aroostook shop currently has two full-time employees and is seeking to fill two part-time positions within the next couple months.

The Caribou shop, located between Caribou and Presque Isle on the Presque Isle Road, offers 18 unique strains of cannabis that help users cope with a variety of medical conditions, including cancer, glaucoma, AIDS, Crohn’s disease, and alzheimer’s, as well as chronic symptoms such as severe nausea, seizures, and persistent muscle spasms.

Additionally, the shop offers numerous alternatives for those unable to smoke, ranging from edibles such as brownies, chocolates, granola bites, lollipops, and cookies, to edible tinctures and topical salves. Patients also can choose from indica, sativa, CBD, or hybrid strains depending on their ailment.

Safe Alternatives General Manager Kayla Bosse and Special Projects Coordinator Connie Akerson said recently that they have been seeing an average of six customers per day, just ten days after opening for business in Caribou on June 9.

Bosse and Akerson said the process of serving customers begins at the doctor’s office.

“If a patient has a health issue, their doctor may recommend medical cannabis for them,” Akerson said. “At that point, the patient and doctor work to get certification (or a medical marijuana card) for the patient.”

The state’s’ Medical Use of Marijuana Program provides oversight for the certification process, patients, qualified doctors, caregivers and dispensaries. 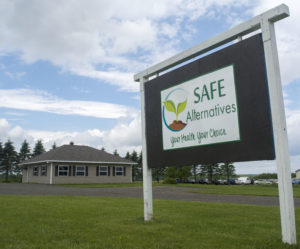 “After getting your card, you need to sign up with a dispensary or caregiver,” Bosse said. “If you choose to sign up here, we provide an orientation packet in which we provide additional information about cannabis and other methods of ingestion.”

A caregiver is an individual who, after registering with the state can assist “no more than five qualifying patients at any one time with their medical use of marijuana” and possess no more than two and a half “ounces of prepared marijuana for each patient served.”

Dispensaries, on the other hand can serve more than five patients. Once registered with the state, dispensaries are required to follow the same rules as a caregiver, in addition to taking strict security measures, such as keeping prepared marijuana under double lock and taking daily inventory. Employees are subject to strict drug screening and are required to report any suspected illegal activity on the premises.

Once patients have registered with the state, their caregiver or dispensary must keep a copy of their medical marijuana card on file and patients also must keep a card on them whenever in possession of marijuana products.

“As long as you have the product on you, you have to have your license,” Bosse said.

At its Caribou facility, Safe Alternatives admits only one patient at a time through double-locked doors into the dispensary portion of the building, a small room that contains all the available cannabis and a glass display case with small samples of available products. Patients pick out and purchase medical marijuana in this room.

“We try to provide discreet and compassionate care,” Akerson said. “I’m glad that we are here to offer a safe alternative to different types of pharmaceutical drugs. If something isn’t working for someone, they can seek out an alternative.”

Akerson added that all products at Safe Alternatives are tested at a lab that certifies the level of chemical compounds, such as THC, in the cannabis. Edibles also are made in a commercial kitchen for quality assurance

Since being established in 2011, Safe Alternatives has made free deliveries of medical cannabis to patients across Aroostook County every 15 days. Since opening the Caribou shop, however, Bosse and Akerson said they are doing less deliveries now that more of the company’s patients can easily drive to the facility.

Bosse said the decision to move to Caribou was for the convenience of patients, most of whom are from the central Aroostook area.

Safe Alternatives only offers medicinal marijuana, even though a statewide, citizen-led referendum made recreational marijuana legal in Maine last year.

Bosse and Akerson did not want to address any questions concerning the legalization of recreational marijuana in Maine or any enforcement issues concerning the difference between state and federal laws regarding cannabis. Both women said they preferred to let Safe Alternatives CEO Leo Trudel, who will not be available until early July, respond to those questions. Shortly after he returns, they said, the Caribou dispensary also will hold an open house for members of the public to learn more about the facility.

Possessing and growing marijuana for recreational use now is legal in Maine, but buying or selling it is not until the regulations for the new law are implemented.

Despite state laws, however, medical and recreational marijuana use and sale remain illegal under federal drug laws, though the Obama administration and previous Congress put protections in place to essentially prevent enforcement of them.

Under the new administration, though, U.S. Attorney General Jeff Sessions is trying to undo those protections in hopes of enforcing all federal drug laws.

Bosse acknowledged that while “there is always a threat” that federal entities could try to stop medical marijuana facilities, she is primarily focused on the “day to day operation” of the dispensary in Caribou.

Both Akerson and Bosse said they were thankful to work with Caribou, and that the city was generally supportive.

“A lot of towns in the area are not supportive,” said Bosse, “and Caribou was very nice to deal with.”

Next year's Caribou City Council will include a new member and a longtime councilor thanks to Tuesday's election.
Pets END_OF_DOCUMENT_TOKEN_TO_BE_REPLACED

I know many of you have followed DeeDee’s story. DeeDee had leukemia and was under vet care for the past few weeks. Early one recent morning, she lost her battle with leukemia.
What's Happening This Week END_OF_DOCUMENT_TOKEN_TO_BE_REPLACED