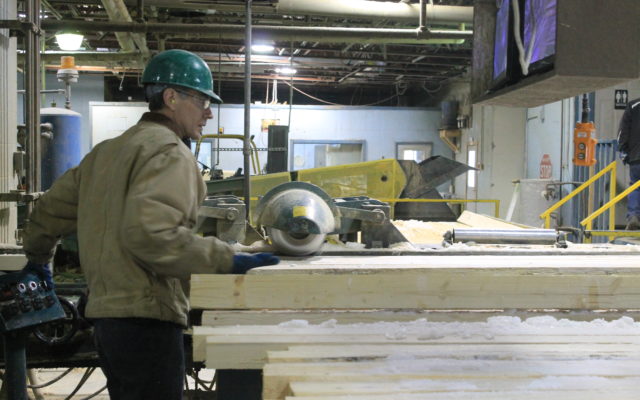 Anthony Brino • February 13, 2018
With a rise in lumber prices, Aroostook County's largest sawmill is gearing up for an expansion and investments in efficiencies.

MASARDIS, Maine — With a rise in lumber prices, Aroostook County’s largest sawmill is gearing up for an expansion and investments in efficiencies.

Maibec, the St. Pamphile, Quebec-based company that acquired the former Levesque sawmill in Masardis in 2015, is riding a strong wave of high lumber prices and looking to plow some of those earnings into the facility, said mill manager Nate Whitney.

“It’s an exciting time here,” Whitney said during a tour of the facility on Feb. 7. “We’re really trying to create a mill that’s going to see the next generation of sawmillers run and hopefully keep 140-plus people employed here for a long-time.”

Owned by the Tardif family of Quebec City, the Maibec company has long had ties to the North Maine Woods as a supplier of timber for the St. Pamphile mill, located 35 miles west of Allagash. The name Maibec is a blend of the words Maine and Quebec.

The Masardis mill, originally built in the 1960s and now the largest in output in Aroostook County, produces dimensional fir and spruce lumber for East Coast wholesale markets. It’s slated for a host of modernizations that will total investments in the “several million” dollar range, Whitney said.

The company already has added an automatic grader to its planer mill, which refines and smoothes cut dimensional lumber. Last summer, the company built a new $1 million road of more than 11 miles connecting the mill directly to the Oxbow Gate entrance to the North Maine Woods so that larger trucks can deliver larger wood loads without using public roadways.

This spring, Maibec will be replacing a wood infeed system and in the fall will be building a new kiln to dry cut lumber.

“That’s all in preparation to hopefully replace one of the sawlines in the sawmill to a brand-new state of the art sawline,” Whitney said.

The mill currently has two saw lines, one large and one small, and the new one is slated to replace the smaller of the two, Whitney said.

“We’re trying to take advantage of some of the smaller log diameters that are in the market here and at the same time maximize what we get off of that log.”

This summer, the company also is planning to add a third shift, running Friday, Saturday and Sunday, Whitney said.

Currently, the mill runs two 10 hour shifts a day, five days a week, and some workers are putting in over-time on Fridays to meet additional demand because “lumber prices are at historic highs,” Whitney said. “We want to take advantage of that while we can.”

Whitney, who grew up in the southern Maine town of Wells and worked in manufacturing before entering the sawmill industry a decade ago, said the last year’s rise in lumber prices is “almost solely linked” to housing and construction.

Other factors include wildfires in British Columbia and the new U.S. tariff on Canadian softwood lumber.

“As you see in any type of market, when you have a high, you’re going to have a low,” Whitney said. “The expansion, the modifications and improvements to the mill really is in preparation for a lower market. We want the mill to be sustainable. We want to be ready for when the prices are low and still be competitive.”

Like all of Aroostook County’s lumber mills and many employers in northern Maine, Maibec is looking for more workers.

“But I think we can be creative. That weekend shift could appeal to people who maybe are going to school during the week. Maybe somebody who has older parents they’re caring for and are tied up during the week. Or maybe a young parent whose spouse works during the week and they want to avoid daycare. We’ll see.”

Many of Maibec’s workers live in Ashland or other Route 11 towns, though some also commute 30 miles or more from communities around the Presque Isle area, the St. John Valley and southern Aroostook County.

The lumber industry’s workforce is on the older side, with many at or nearing retirement age, and employers like Maibec want to ensure they’ll have a reliable workforce in the decades to come.

“Some of these guys have been doing this for 35 years,” Lothrop said of the mill’s workers.

Lothrop said Maibec is both actively recruiting all ages and reaching out to high schoolers to pitch them on careers they can pursue as engineers, electricians or equipment operators.

On Jan. 1, the company gave every hourly employee a dollar-an-hour raise, Lothrop said. Entry level workers at Maibec start at $13 to $15 per hour, depending on the position and the time of the shift, in addition to a variety of quality and safety bonuses, he said.

Maibec also has an internship program available to high schoolers in Ashland, where they can work at the mill several afternoons a week, earn school credit and get paid, Lothrop said.

He added that the company also is considering launching a scholarship program for students interested in taking high-skilled, high-demand jobs, such as an electrician or machine mechanic.

“They could get a two-year degree and then come work for us if we pay for their education.” 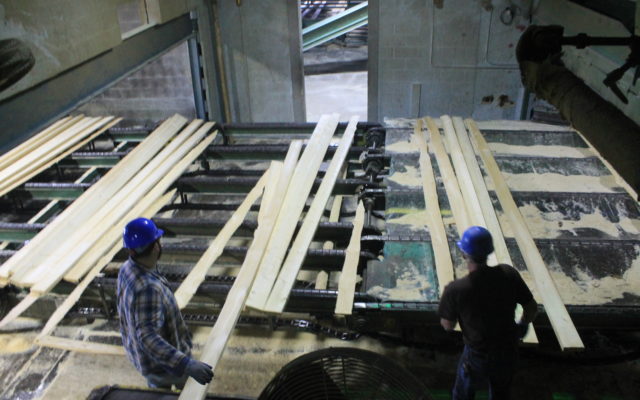 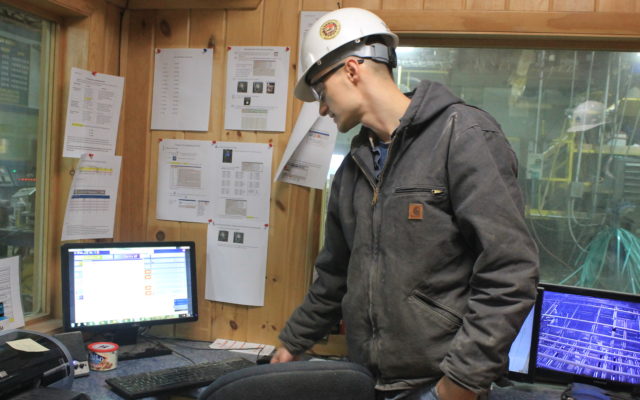 Cole Richards, planer mill manager at Maibec, observes the mill’s software system in an office at the Masardis sawmill on Feb. 7.
(Anthony Brino)

Members of the Houlton Band of Maliseets will head to the ballot box in order to determine who will be elected as their new tribal chief.
Pets END_OF_DOCUMENT_TOKEN_TO_BE_REPLACED