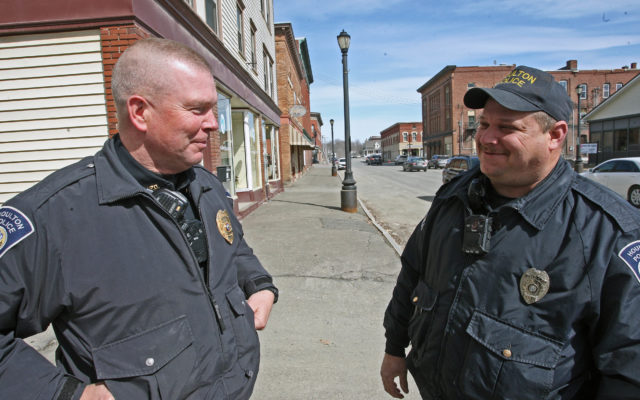 Joseph Cyr • April 11, 2018
The Houlton Police Department now has additional tools to use in its war on crime.

HOULTON, Maine — The Houlton Police Department now has additional tools to use in its war on crime.

On Monday, Houlton Police Chief Tim DeLuca informed members of the Houlton Town Council that the department is now outfitted with 10 new body cameras to aid officers when it comes to making arrests.

“Over the past few years, we have been fortunate enough to have body cameras, but they are starting to get some age,” he explained. “Body cameras are a great tool for law enforcement. They protect both the citizens and the officers when they are out there answering calls for service.” 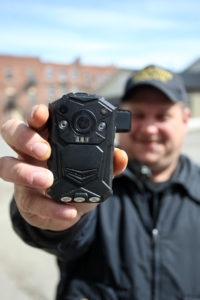 Houlton Police Officer Charles Heath holds up one of the department’s new body cameras that all patrol officers are now wearing when on duty. (Joseph Cyr)

The chief explained that at the end of each shift, any videos recorded are downloaded into a database and can be used for both training of officers or for prosecuting criminals in a court of law.

“Every officer on duty, who is working a patrol, will be wearing these devices,” DeLuca said.

“We are really excited to get these,” Cpl. William Janakis told the councilors. “The cameras we had (prior) had no low-light technology so we had no usable footage of nighttime events.”

The new cameras are always on, but not necessarily recording constantly, Janakis said. However, once an officer presses the record button, the device not only starts, but records the previous 30 seconds as that data is continually being monitored.

The cameras also are equipped with a night-vision mode so they can be used in almost complete darkness.

“What we really liked best is the low-light capability,” the chief said. “We did a test in a really dark alleyway, and the footage was like daylight hours.”

In other police matters, the council accepted $1,453 from the state as part of a criminal forfeiture of funds from a recent case. Those funds will be returned to the Houlton Police Department to be used to buy additional equipment.

Next year's Caribou City Council will include a new member and a longtime councilor thanks to Tuesday's election.
Pets END_OF_DOCUMENT_TOKEN_TO_BE_REPLACED

I know many of you have followed DeeDee’s story. DeeDee had leukemia and was under vet care for the past few weeks. Early one recent morning, she lost her battle with leukemia.
What's Happening This Week END_OF_DOCUMENT_TOKEN_TO_BE_REPLACED