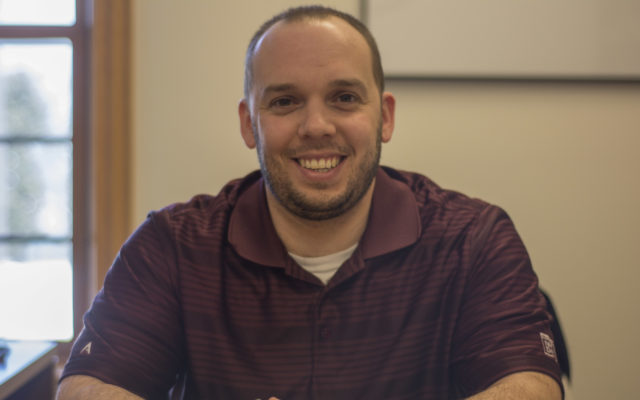 Nadeau, who has spearheaded the Small Business Development Center program at the Northern Maine Development Commission in Caribou, said on Wednesday that he was honored to receive the award.

Each day, Nadeau helps people who are trying to start their own business, expand their current business, or sell or buy a business. He assists them with their questions about how best to go through that process and to put formal business plans together and create projections for sales. He also maintains regular communication with local bankers working on loans for the entrepreneurs.

In addition, Nadeau hosts between nine and ten workshops annually on topics ranging from how to best start a business in northern Maine to hiring and managing employees.

Before NMDC, Nadeau worked as a commercial underwriter for insurance at Maine Mutual Group, and before that he worked in a management position at a car dealership for six and a half years. He received his bachelor’s degree in business administration at the University of Maine at Orono and said he is currently working on obtaining his master’s degree through Husson University.

To summarize what he does at NMDC and with SBDC, he said his primary goal is to create economic opportunity in the region.

“My position here is very unique,” Nadeau said. “I’m the only one in The County who does this. Generally, when someone is looking to start a business, they need capital, and in order to get that they need a formal business plan. Most people don’t know how to put one together or how to write one, and that’s where I can help.”

His expertise can come in handy even for those who perhaps are familiar with writing a business plan, as he has access to resources funded by SBDC that can help entrepreneurs improve on their plans.

“If someone [interested in starting a restaurant] asks, ‘How much does it cost to make a plate of food for breakfast, lunch, and dinner,’ I have a program I can access that lists the industry standards for that industry,” he said as an example.

Nadeau also has access to a network of peers within the SBDC program who are available to offer advice on any topic with which he is unfamiliar.

“If I don’t know the answer to something,” he said, “I can generally find out pretty easily.”

According to Nadeau 13 of the 16 Maine counties have their own SBDC.

There are advantages to working in The County, he said, adding that many in his position in central and southern Maine have to compete against similar organizations, whereas he is essentially the only person in Aroostook who can offer these services.

The award, however, is not only based on numbers, but on specific goals that SBDC officials need to meet that are tailored to their region and its demographics.

He said the SBDC at NMDC has been surpassing its goals for the past couple years, and is now getting recognized for that work. Last year, the SBA honored Nadeau for his work with a State Star award at a national conference in Nashville, Tennessee.

While Nadeau doesn’t have much in terms of competition in The County, he said its location can pose challenges.

“We’re so far away from the rest of the network that I can’t partake in a lot of the in-person activities like trade shows or get togethers that other people can,” he said. “That’s a challenge for me, but on the positive side I’m lucky to be located at NMDC. Not all SBDCs are located at an [organization like NMDC].

Nadeau is optimistic about his work and position, and said there really aren’t many challenges aside from the location and “the fact that it’s always harder to compete against the big guys.”

“We all have goals, and we all have different challenges,” he said. “I’m surrounded by a good team here at NMDC. I have a good group of coworkers who are very supportive of my program and often send me leads, which is a big help.”

Because The County is sparsely populated, Nadeau said there’s more comradery in the region as opposed to more urban counties in the state.

“Everyone knows everyone here, and we all have the same focus,” he said. “We all want to see The County prosper and hopefully stop the decline in population.”

Only one member of Maine’s congressional delegation had come out in favor of impeaching President Donald Trump ahead of House Speaker Nancy Pelosi’s Tuesday announcement that the Democratic-led House of Representatives would begin an impeachment inquiry.
Pets END_OF_DOCUMENT_TOKEN_TO_BE_REPLACED