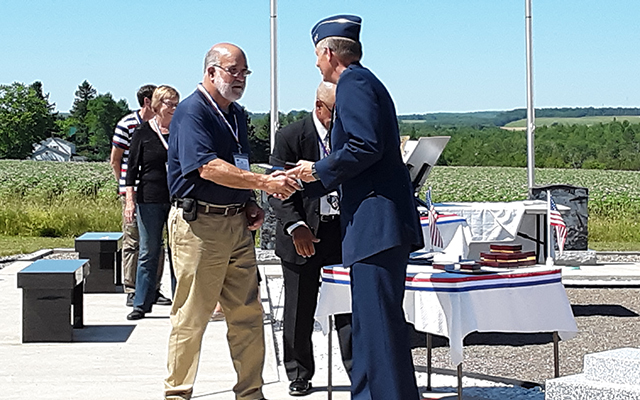 Melissa Lizotte • July 23, 2018
For many local Vietnam War veterans, their return home was not the warm welcome that today’s soldiers often experience from fellow community members.

FORT FAIRFIELD, Maine — For many local Vietnam War veterans, their return home was not the warm welcome that today’s soldiers often experience from fellow community members.

“I remember people throwing tomatoes and rotten eggs at us,” said Jimmy Greenier, now of Mapleton and a member of Fort Fairfield High School’s class of 1967. HIs experiences were common among Vietnam veterans due to the increasing backlash and protests against the war that took place during that era.

Greenier was one of 25 students from his graduating class who served directly in Vietnam during the United State’s involvement in the war from 1965 to 1973. On Saturday, July 21, those veterans, along with 20 others who served in the military during the Vietnam War were honored with a special ceremony, organized by class representative Mary Rochford Hunter, at the VFW Paul Lockhart Post 6187 in Fort Fairfield.

His fellow veteran and classmate Timothy Howard, who served in Vietnam and Germany and now lives in Freeport, also remembered the indifference and hostility that people sometimes felt toward soldiers of that era.

“We had to get out of our uniforms and into civilian clothes as quickly as we could,” Howard recalled. “Ceremonies like this one are important because when we don’t honor veterans we start to forget what they went through.”

Standing at a podium set up at the VFW’s outdoor memorial to Fort Fairfield veterans, Peter McKenny, a class of 1967 graduate and fellow veteran, gave a brief history of the former students’ military involvement. Their class had been the largest in the history of the town, reaching 150 at one point, so large that a new school was built to accommodate the increase of students that was a result of the Baby Boom generation after World War II.

One-hundred and five students graduated from Fort Fairfield High School in 1967, thus far the largest class in the school’s history and the first to attend the newly built school during their entire four years of high school. Many enlisted in the military before graduation while others were drafted later on.

As students, they lived through the Cold War era and witnessed how Loring Air Force Base, only 12 miles away in Limestone, became one of the largest bases in the country that had the capacity to store nuclear weapons, making the area a potential target for enemy attacks.

“We witnessed the rise of the B-36 and the B-52 bombers. We participated in ‘duck and cover’ exercises in school and realized that our community was under a constant threat,” McKenney said. “Given this history it makes sense that so many classmates would sign up to serve.”

After a moment of silence was held for all deceased classmates Saturday, veteran and class of 1967 graduate James Tinkham read a letter from Dale Barnes, one of the honored veterans who was unable to attend Saturday’s ceremony, which talked about the final days of Cox’s life.

“‘David enlisted in the U.S. Marine Corps 120 days before we graduated and left for Parris Island, South Carolina, 10 days after we graduated,’” Tinkham read. “‘During a routine medical exam, David found out that he was blind in one eye but he refused medical discharge.’”

Barnes and Cox later met each other again in Vietnam, when Barnes found his friend standing outside his troop’s command post. When Cox went on patrol with his troop, Barnes monitored the soldiers through radio communication. Three hours into the patrol, Barnes learned that the troop had taken on sniper fire.

Four soldiers had been wounded and one — Cox — was killed.

“‘I knew in my heart that David had been the one soldier to be killed,’” Tinkham said, reading from Barnes’ letter. “It’s impossible to forget the moment I had to identify him. Here was the person who had stood by me in school and who was now lying before me. He was a hero and friend who will never be forgotten.’”

Tinkham and fellow classmate Bob Manter then placed a wreath upon Cox’s memorial marker and gave him a final salute goodbye.

Maj. Gen. Douglas Farnham, adjutant general for the Maine National Guard, spoke about the honor of seeing Maine soldiers answer the call of duty during times of conflict and drew inspiration from Joshua Chamberlain, a college professor from Maine who joined the Union Army during the Civil War.

“Chamberlain spoke of what was later called ‘American Ideas,’ that the defense of this country is sacred and must be a vital part of our union,” Farnham said. “Those ideas are what soldiers during the Vietnam era and today are willing to sacrifice their lives to defend.”

After all veterans received certificates of appreciation from Farnham and commemorative plaques from Tinkham, U.S. Sen. Angus King, who also had come to Fort Fairfield to speak with local farmers and participate in the annual Maine Potato Blossom Parade, closed the ceremony by thanking all veterans for their service and reflecting on the meaning of each soldiers’ sacrifices.

“Every person who signs up for the military puts their life on the line and that’s what the veterans of the class of 1967 did,” he continued. “Today it’s never been more appropriate that ceremonies like this are happening all across America to honor those sacrifices.”

Veterans and family members who attended Saturday’s ceremony also learned of an opportunity to share their memories in a memorial book that the class of 1967 will publish in late 2019. The book will contain information about each military veteran’s service, including duty assignments, medals and citations, lessons learned from their experiences and contributed photos, and will serve as another way to honor the numerous veterans from the class who served their country.

For the first time since 2019, there is competition for open seats on the Houlton Town Council
Pets END_OF_DOCUMENT_TOKEN_TO_BE_REPLACED

We hope everyone enjoyed a wonderful holiday season and is looking forward to the new year.  December was a busy month at the Central Aroostook Humane Society with so many people and businesses bringing in much-needed supplies and monetary donations, which help us to take care of the special temporary pets in our care.
What's Happening This Week END_OF_DOCUMENT_TOKEN_TO_BE_REPLACED