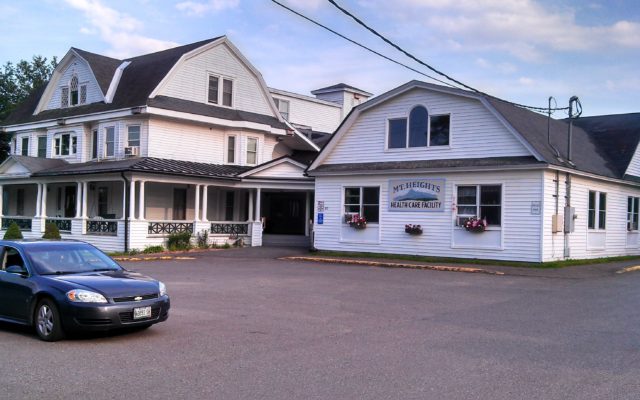 PATTEN, Maine — One of Patten’s largest employers, Mountain Heights Health Care Facility, announced Wednesday that it was closing its doors.

Dr. Stephen Weisberger, owner of the nursing home, announced the closing in a press release Wednesday afternoon. The closure impacts 22 residents at the facility, as well as 53 employees.

“Today is a sad day for the Mt. Heights family, for the Patten community, for the residents of our care center and for the employees who have cared for so many community members throughout the years,” he stated.

The Department of Health and Human Services has approved the closure and is working with Mountain Height’s representatives on relocation plans for the 22 residents who reside in the building, located on U.S. Route 159, according to the release. The current plan is to cease all operations and close the building by Sept. 1.

Patten Town Manager Raymond Foss said Wednesday that the town was “reeling” from the news of the sudden closure and added he had no advance knowledge.

“It’s devastating to our community,” Foss said. “This closure will leave a hole so big in our town, I am not sure how that gets filled. They (Mountain Heights) are a vital part of our community.”

A special meeting was held Monday at the State House in Augusta to discuss the closure, the town manager said. Foss was unable to attend that meeting, but was hopeful a number of questions would be answered. Results of that session were not immediately available.

One particular question Foss is seeking an answer to concerns whether  the Mountain Heights owners will pay the back taxes they owe the town of Patten. The group owes about $12,000 in unpaid real estate taxes from 2017 and $19,000 from 2018. In addition the group owes $4,900 in personal property taxes over those two years.

Foss said he has reached out to local and state representatives to see if there is anything that can be done to at least delay the closure, but that delay is unlikely since residents and family members have already been told they needed to find alternative arrangements.

Mountain Heights Health Care Facility began providing care for area seniors in the 1950’s and it has been owned and operated by Weisberger since the early 1990’s.

“We know the decision to close is equally hard for the employees,” Weisberger said in his statement. “There are neighbor facilities that have several staff openings and we hope all the area nursing homes will work together to find alternative employment for all 53 employees of Mountain Heights.”

He indicated that the decision to close was prompted by a decline in recent years in the average daily occupancy at the center and a dwindling population in Penobscot County that “has been significantly impacting the utilization of Mountain Heights.”

He added that minimum wage increases had impacted all staffing levels and that increasing costs had not been matched by similar increases in “our Mainecare rates which is where 90 percent of the revenue for Mt. Heights comes from.”

It is unclear where the 22 residents might relocate. The next closest nursing home facilities are located in Houlton (about 36 miles north of Patten) and Millinocket (about 40 miles south).

Foss said that relocation or residents will be extremely hard on many of the families.

“These smaller facilities allow people to stay close to home,” Foss said. “I know of several husbands and wives who visit their spouses multiple times a day at that facility. There are some residents who are in their late 90s who have been there for years, and their families routinely visit. Families will have to make some very difficult decisions.”

Informational meetings for families and residents have been scheduled, according to Weisberger.

The Baxter House, a small apartment building attached to the care center, also will be closing. Mountain Heights will be providing information and resources to those tenants as they seek to relocate as well, Weisberger said.

A familiar face to Aroostook County residents has announced her candidacy for the Maine State Senate.
Pets END_OF_DOCUMENT_TOKEN_TO_BE_REPLACED

When 14-year-old Isaiah Belyea of Caribou began volunteering for Halfway Home Pet Rescue three years ago, he never imagined that his love for animals would quickly turn into a budding career.
What's Happening This Week END_OF_DOCUMENT_TOKEN_TO_BE_REPLACED