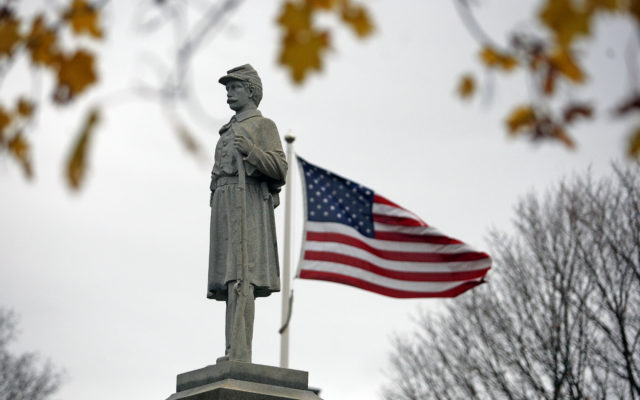 Jen Lynds • October 3, 2018
Casey Harding of Houlton said during a recent interview that her family “loves” going to Monument Park in Houlton.

HOULTON, Maine — Casey Harding of Houlton said during a recent interview that her family “loves” going to Monument Park in Houlton.

Although there are no swing sets or teeter-totters there, she said that her family, which includes three children, enjoy concerts by McGill’s Community Band.

At the same time, the park features something that consistently attracts children — a prominent monument of a soldier on a massive pedestal.

Harding said her children have asked her about the history behind the statue, but she could never really answer their questions. In the summer, children are often found sitting and climbing on the wide base, exploring the granite monument as the band plays or other activities are ongoing.

“I don’t think we ever talked about that statue in school during Maine history classes,” she said. “I always knew it was a war monument, but I never really knew what prompted the community to put it up.”

The statue, which is the centerpiece of Monument Park at the intersection of Broadway and Main streets, is actually a remembrance piece to honor those who died in the American Civil War. Atop the base is a mustached Civil War Union soldier in uniform with his right hand on his hip and his left hand grasping the barrel of his rifle.

On the bottom of the base are eight evenly spaced cannon balls.

According to an Aroostook Times article printed at the time, the statue was dedicated on May 31, 1909, in front of a large crowd of people, which included an audience sitting on both balconies of the Houlton Elks Club.

In 1902, the devastating Great Fire of Houlton destroyed 20 business blocks, three churches, and 75 houses, displacing 80 families, according to the Maine Memory Network. It was after the fire that town officials decided that the scorched part of town near the Cary Library should be used for construction of a war memorial and park.

The Houlton Civil War Monument, which cost $3,500, was made by Houlton Granite & Marble Works. It was financed with $1,000 from the town, with the remainder through public fund raising.

Cora Putnam, in her book “The Story of Houlton,” noted that on the day of the dedication, “hundreds of people gathered to listen to the dedicatory exercises, which were opened with music and singing, then came the unveiling of the monument, and the stars and stripes were unfurled.”

Since the dedication of the monument, additional pillars have been added to the park. In 1988, a multi-war monument was dedicated to honor those who died in World War I, World War II, the Korean War, Vietnam War, Persian Gulf War and the War on Terror. The names of the dead from each war are inscribed on the base.

In 2001, a a 21-ton World War II monument also was dedicated at Monument Park. It stands 11 feet tall at its center and 17 feet long, and bears the names of more than 1,240 men from Houlton who served in the military during World War II. 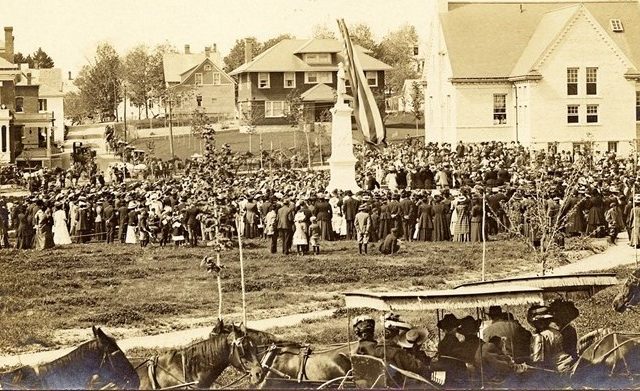 Hundreds came to Monument Park in Houlton on May 31, 1909, for the dedication of a monument to the soldiers who died in the American Civil War. The statue is the centerpiece of Monument Park. Atop the base is a mustached Civil War Union soldier in uniform with his right hand on his hip and his left hand grasping the barrel of his rifle. (Aroostook Historical and Art Museum)

Next year's Caribou City Council will include a new member and a longtime councilor thanks to Tuesday's election.
Pets END_OF_DOCUMENT_TOKEN_TO_BE_REPLACED

I know many of you have followed DeeDee’s story. DeeDee had leukemia and was under vet care for the past few weeks. Early one recent morning, she lost her battle with leukemia.
What's Happening This Week END_OF_DOCUMENT_TOKEN_TO_BE_REPLACED