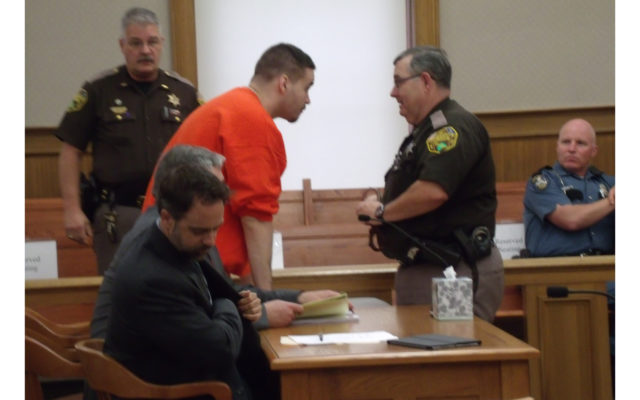 Jen Lynds • November 9, 2018
Reginald Dobbins, who was sentenced to 65 years in prison for the brutal murder of another Houlton man more than two years ago, appealed his case before the Maine Supreme Judicial Court on Wednesday.

HOULTON, Maine — Reginald Dobbins, who was sentenced to 65 years in prison for the brutal murder of another Houlton man more than two years ago, appealed his case before the Maine Supreme Judicial Court on Wednesday.

After a June 2017 trial, Aroostook County Superior Court Justice Harold Stewart II meted out the sentence on Dobbins for the beating and stabbing death of Keith Suitter, 61, on March 1, 2015. Dobbins was only 18 when he killed Suitter.

Attorney Tina Nadeau argued the case before the Law Court on Dobbins’ behalf, telling the justices that the trial court erred when it excluded evidence from Dobbins’ trial that his co-defendant, Samuel Geary, had pleaded guilty to murder in September 2017. Geary, a Houlton resident who was 16-years-old at the time of his arrest, received a 40-year-sentence but was not called to testify at Dobbins’ trial.

An autopsy revealed that Suitter suffered 21 blunt-force trauma blows, consistent with being struck by a hammer, according to the state medical examiner, and 10 stab wounds to the head and back.

Nadeau maintained on Wednesday that Dobbins’ sentence was too long, considering his age at the time of the crime. She said that juveniles are redeemable even if they are convicted of heinous crimes, but that Dobbins was given no chance to rehabilitate himself.

“Eighteen is where the law has drawn an arbitrary line between childhood and adulthood,” she said. “Adulthood occurs over time. Eighteen-year-olds simply are not adults … Science has created new principles of law when it comes to young people.”

Upon questioning from the justices, Nadeau acknowledged that the judge considered factors in line with a 1990 state supreme court decision, State of Maine v. John Shortsleeves, that laid out conditions under which a judge may send a defendant to prison for life. One of those was the cruel nature of the crime. They also maintained that Dobbins had not been sentenced to life and would get time off for good behavior.

Chief Justice Leigh I. Saufley noted that Dobbins’ defense was that he was there at the murder scene, was horrified, but stood frozen as Geary committed the murder.

“The judge declined to allow evidence that the co-defendant admitted to murder,” Saufley continued. “Should that cause us to vacate the judgment?”

Nadeau contended that the court’s rejection of evidence of Geary’s guilt “deprived Dobbins of a chance for a defense.”

Other justices noted that Stewart did take Dobbins’ age into account before sentencing, and that Dobbins objected to the state’s request to try him with Geary at the same time. They pointed out that Nadeau now seemed to want to invite evidence of Geary’s culpability because it supported Dobbins’ bystander defense. Nadeau contended that Dobbins’ trial attorneys “took an inconsistent position after Geary pled.”

Alsop added that the state presented evidence that both men perpetrated the crime and acted together.

“We tended to equally show that both were involved in the death of Suitter,” he said.

He said that the court agreed that telling the jury of Geary’s plea without further explanation “could easily mislead the jury into thinking that exonerated Dobbins, which it clearly did not.”

“This case was horrific,” he said. “All factors were suggestive of a very long sentence, and that was imposed.”

Nadeau disagreed, saying that Dobbins’ sentence amounted to a life sentence, because he would not be released from prison until he was more than 75-years-old.

“He also was prevented from offering a complete defense, and is now being deprived of an opportunity to demonstrate rehabilitation and potentially get released,” she said. “There was lip service paid to youth, but it didn’t make a difference to the judge.”

The Law Court will rule on the case in the coming months.

I was mentioning to our board of directors this past week that I got a quarterly report from a large online retailer who will donate a portion of my purchases to a charity I select.
Campaign Corner END_OF_DOCUMENT_TOKEN_TO_BE_REPLACED