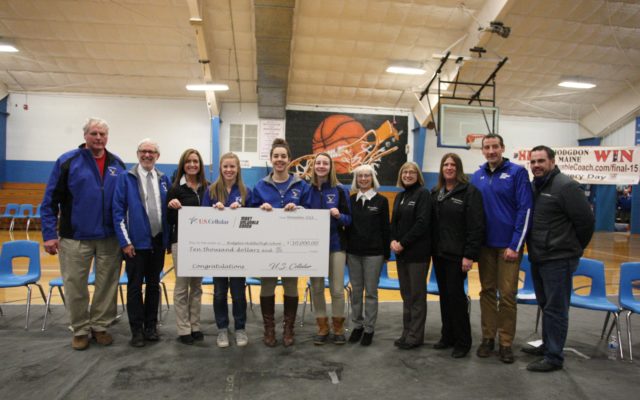 Williams placed third in the cellular phone company’s nationwide Most Valuable Coach contest, which was designed to recognize high school coaches who made a difference not just on the athletic field, but also in their communities.

“I would like to take the opportunity to say, ‘Thank You,’ to everyone, not just for your support for me personally, but for our school,” Williams said. “This truly is a win for all of us.”

Williams stated that the district plans to use the money for youth and feeder programs as needed, as well as to fund middle school and high school athletes wishing to attend camps and clinics in their off season.

“The difference you make not only here at the high school, but also at the middle and elementary levels, did not go unnoticed by this community or our program judges,” York said. “The impact that you have made by connecting to the good in everyone is what we have noticed most about you.”

U.S. Cellular’s Most Valuable Coach contest began on Aug. 21 and gave people the opportunity to nominate, vote for, and honor current coaches of K-12 school-affiliated sports teams. People nominated thousands of coaches across the country. Those who nominated Williams described her as a key asset to the community and a role model to her team.

The top 50 finalists were selected and put out for public vote before that field was narrowed down to the final 15.

A panel of judges, including Green Bay Packers wide receiver, Randall Cobb, and WNBA All-Star, Maya Moore, helped determine the winning coaches. Along with online voting, the judging panel evaluated the final 15 coaches based on the positive impact they have on their teams, school and city, as well as their leadership qualities.

“Just a few weeks ago we were in this same gym celebrating Sarah’s accomplishment,” said Stephanie Harris, one of the featured speakers Friday. “There was no doubt in my mind that we would be here again today.”

Harris said she has had the pleasure of knowing Williams since Williams was a first-grade student in her class at Houlton Elementary School. Since then, Williams has gone on to become a close family friend. Harris said Williams was one of the first people that her daughter Addie, a member of the Hodgdon softball team who was diagnosed with leukemia back in 2016, wanted to speak to when she was able to see visitors.

“Sarah instilled a love of softball in all her players,” Harris said. “She taught them the skills of the game, but lessons that extend far beyond the field. I have never seen a team encourage and support each other as much. While they took games seriously, they also had lots of fun.”

Allie Winship, one of Williams’ softball players, nominated Williams for the award and said her coach, and the entire community, have had a positive impact on her.

“I always knew that our little town of Hodgdon was capable of something big,” Winship added. “What I have now learned is that it is not just the town, but the people of the (local) community who have stood together to honor our local coach and that the little steps in life make a big difference.”

Kora Lambert, another of Williams’ softball players gave a shout out to everyone in the local community who helped by voting each day.

“I wouldn’t be standing here today if it wasn’t for everyone, all over the state, who voted for coach,” she said. “I think it is a great thing that a community is able to rally together like this. Coach (Williams) is a great soul and a great teacher. She really knows how to get our butts in gear on the softball field. She has definitely helped me along the way.”

“In thinking back to my high school days, we used to have coaches that were a little different than they are today,” SAD 70 Superintendent Scott Richardson said. “Today’s coaches are role models who promote teamwork and celebrate success. They not only teach sport skills … they also teach values. And that is what we are celebrating here today.” 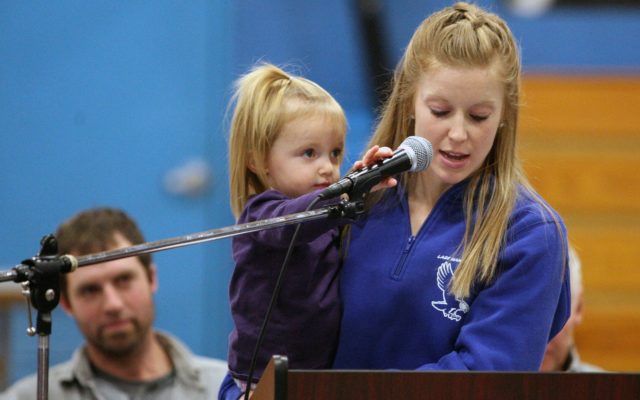 Hodgdon coach Sarah Williams speaks to the audience Friday afternoon as her daughter Paisley plays with the microphone. In the background is Williams’ husband Tim. A U.S. Cellular representative presented Sarah Williams a $10,000 check for her school for finishing third in the company’s nationwide Most Valuable Coach contest. (Joseph Cyr)

Many of you have been following Luke's story on our Facebook page. Luke came to the Ark last July with his sister Lydia at 8 weeks old. Both Luke and Lydia were in really bad shape with untreated upper respiratory infection.
Campaign Corner END_OF_DOCUMENT_TOKEN_TO_BE_REPLACED