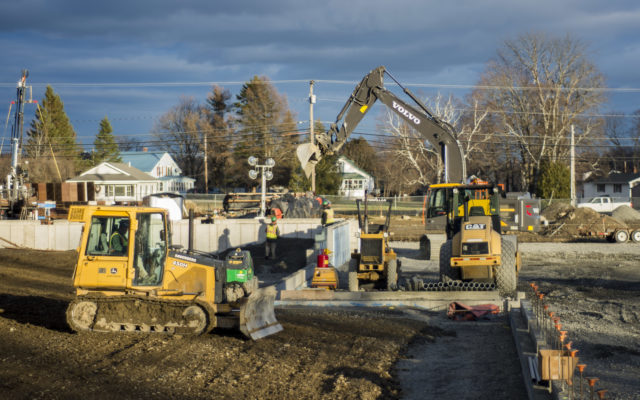 School under construction in Caribou finally has an official name

Chris Bouchard • January 8, 2019
After nearly a year of wrangling over the perfect name for Caribou’s new PreK-8 school that is under construction, members of the RSU 39 Board of Education finally have voted on an official name: Caribou Community School.

CARIBOU, Maine — After nearly a year of wrangling over the perfect name for Caribou’s new PreK-8 school that is under construction, members of the RSU 39 Board of Education finally have voted on an official name: Caribou Community School.

A naming committee was formed in early 2018, and they presented the RSU 39 board with three names last March after reaching out for community suggestions and debating which title would best represent the new facility. The RSU 39 board, as well as the naming committee, were split in regards to whether or not the name should specifically include Caribou’s name, or if it should represent that the new school is intended to serve a region and not just one municipality.

Caribou Community School was among the names presented in March, along with Caribou Elementary School and Eastern Aroostook Elementary School. While the board members ultimately did not accept any of the three names during that March meeting, the matter was revisited during a Dec. 5 RSU 39 meeting in which two monikers were presented as finalists: Caribou Community School and Caribou Century School.

RSU 39 Superintendent Tim Doak explained during the Dec. 5 meeting that the name Caribou Century School would not only represent the previous century of education in Caribou, but also emphasize new state of the art facilities included in the new building, which will ideally serve Caribou for decades to come.

According to Jane McCall, the assistant superintendent and naming committee chair, the board made its decision to go with the new name during a Jan. 2 meeting.

Naming committee member Evan Graves presented the group’s findings to the board during this meeting, and said that while the decision of choosing between one of the two names was difficult, they ultimately chose “Caribou Community School,” as it is more of a timeless monicker and will help define the new facility for years to come. He added that the committee also felt Caribou Century School could still be a part of a potential motto for the new facility, as “a school for the century.”

McCall said there was very little conversation about the name during the January meeting, aside from members of the RSU 39 board thanking the naming committee members for their hard work. McCall said that all board members with the exception of Clifford Rhome voted in favor of the new name, and that there was no discussion related to why he was opposed.

In determining the top name, McCall said the committee reviewed the pros and cons of each potential title, with advantages of Caribou Community School being that the name was simple and “flows smoothly,” that community implies inclusivity, and that it was “timeless.” The disadvantage of this name was that it lacks “pizzazz” and doesn’t stand out as much.

For Caribou Century School, advantages were that the name was “unique, and not something you typically hear,” with the con being that the name locks the school into a specific timeframe.

Looking ahead, officials are planning on creating a new sign with the school’s name, at which point it will be placed at the location of the new school on Bennett Drive during an upcoming ceremony.

Construction on the new school was recently placed on hold for the winter, and is scheduled to continue next spring. It is expected to open in 2020.

Maine is more than eight months into Medicaid expansion under the federal Affordable Care Act and trends around who is enrolling and where they live are starting to emerge, bucking some expectations and pointing out access challenges.
Pets END_OF_DOCUMENT_TOKEN_TO_BE_REPLACED