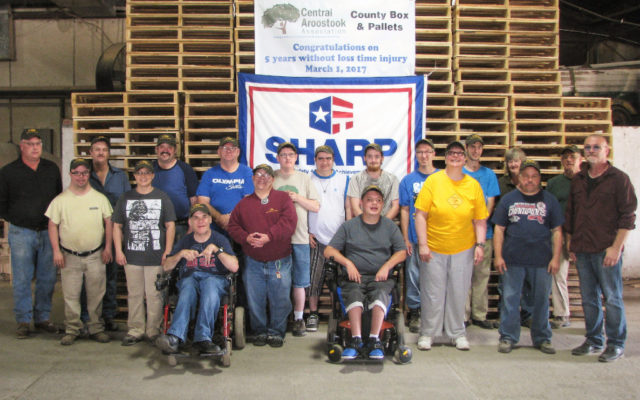 “For the last couple of years, we have lost money running the program,” said Steve Richard, executive director of the Central Aroostook Association, a nonprofit serving individuals with disabilities.

“The cost of lumber and increase in minimum wage has had an impact on the program to the point where it wasn’t sustainable anymore.”

The Central Aroostook Association started County Box & Pallet in the early 2000s as an employment program and it has been fully self-supporting without grants, Richard said.

“Back then, we were having a difficult time finding work for individuals. We said, ‘Why don’t we start our own business?’ We approached McCain Foods to see if we could, back then, repair pallets for the company. Then we started producing new pallets as well as repairing pallets that were broken.”

The business started out in Presque Isle’s Skyway Industrial Park and later moved to its current location on Route 1. It sold pallets and wood construction stakes to farming and construction businesses as well as area food businesses. The organization’s workforce safety record at one point was recognized by the National Safety and Health Achievement Recognition Program.

At its peak, the operation employed 18 people. It currently has 8 part-time individuals with disabilities, plus three other employees, Richard said.

Although some organizations employing individuals with disabilities pay those workers less than minimum wage under a federal waiver, all of County Box & Pallet employees make at least minimum wage, Richard said.

“We do not run any sub-minimum wage programs. We got out of that about nine years ago. We decided we didn’t want to do that any longer.”

Richard said County Box & Pallet also has been affected by the recent rise in lumber prices. The business has sourced lumber from an Amish business in Easton as well as suppliers in Quebec.

In addition to supplying McCain Foods, County Box & Pallet was until about a year ago selling pallets to the Pineland Farms potato company in Mars Hill, which was acquired by Bob Evans Foods in 2017.

“They found another supplier as of last year. That kind of hurt us a bit,” Richard said.

County Box & Pallet will close at the end of April, and the equipment will be sold at auction.

Richard said that the Central Aroostook Association does not have other employment programs currently but that leaders are looking for opportunities.

“We are exploring those possibilities because we want to continue offering the individuals work.”

Next year's Caribou City Council will include a new member and a longtime councilor thanks to Tuesday's election.
Pets END_OF_DOCUMENT_TOKEN_TO_BE_REPLACED

When I wrote the first story of our dog Odie, I didn’t know that I would write a Part 2, but there were so many more stories that I decided more of this little dog’s story needed to be told.
What's Happening This Week END_OF_DOCUMENT_TOKEN_TO_BE_REPLACED