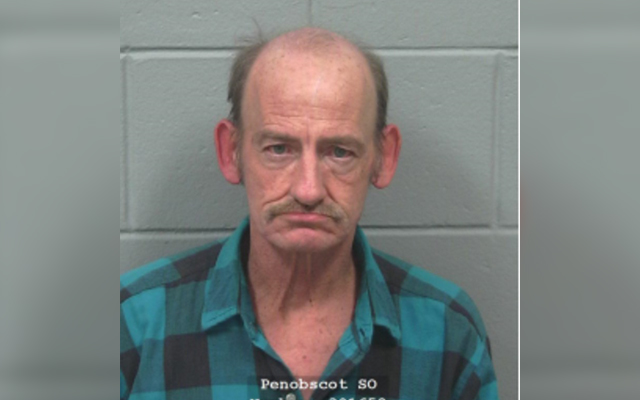 Jen Lynds • February 21, 2019
An affidavit filed at the Penobscot Judicial Center in Bangor sheds light on how a state police trooper tracked down the suspect accused of robbing the Eastmill Federal Credit Union in Patten on Feb. 12.

PATTEN, Maine — An affidavit filed at the Penobscot Judicial Center in Bangor sheds light on how a state police trooper tracked down the suspect accused of robbing the Eastmill Federal Credit Union in Patten on Feb. 12.

Police arrested Bryan Ingalls, 59, on Valentine’s Day and charged him with robbery for allegedly entering the credit union two days earlier, passing a note demanding money to employees, and making off with more than $5,000.

Ingalls remains behind bars at the Penobscot County Jail, unable to make $40,000 bail.

According to court documents, Trooper Tim Saucier wrote that a slender man, who was reportedly wearing a hooded sweatshirt pulled tight around his face, shorts and a possible mask, came into the bank without a weapon but passed a note written with a “kid’s marker.”

He had a smoker’s voice, “nasty teeth” and beard stubble, according to one teller, but was polite and said “thank you” after he was given the money.

Employees were not sure if he walked away from the building or left in a vehicle. He made off with $5,458, according to police.

During a canvass of the neighborhood, police spoke with a man who said that he had seen Ingalls, who he knew, walking in the area and at one point just standing there staring toward the credit union.

The witness provided surveillance video to police, but the individual pictured in it is too far away to make out facial details, according to the affidavit.

Saucier later interviewed Ingalls, who said that he was shopping at the Ellis Family Market in Patten at the time of the robbery. He added that the only person he saw was a jogger in a hooded sweatshirt and sweatpants, but that he’d never seen the jogger before. He said that he would be on video at the store. Police reported reviewing the store surveillance video later but not seeing Ingalls on it.

Saucier also noted that Ingalls had a “smoker’s voice, poor dental hygiene, and a mustache with stubble growth over the rest of his face.”

The trooper also reported that Ingalls is the same size and has the same gait of the man pictured in the surveillance video given to them by the neighborhood resident.

That information, combined with the suspect’s lengthy criminal record, enabled Saucier to obtain and execute a search warrant at Ingalls’ residence.

The owner of the residence told police that another man had intended to give Ingalls a ride to do errands on the day of the robbery, but when the man got to the residence, Ingalls was not there. The motorist then left. A short time, later, however, Ingalls returned and gave the residence owner $500 to repay him for a $370 loan, and told him he could “keep the extra.” The homeowner, who is not identified, told police that he “suspected something was up with Ingalls,” as he had more money than usual.

During a second interview, Saucier told Ingalls that police believed he had robbed the bank and should “help himself out by telling them where the rest of the money was.” Ingalls denied robbing the bank, got angry, and requested a lawyer. While he was being booked at the Penobscot County Jail, corrections officers found a wad of cash in one of Ingalls’ socks and a 20-dollar bill in his long johns.