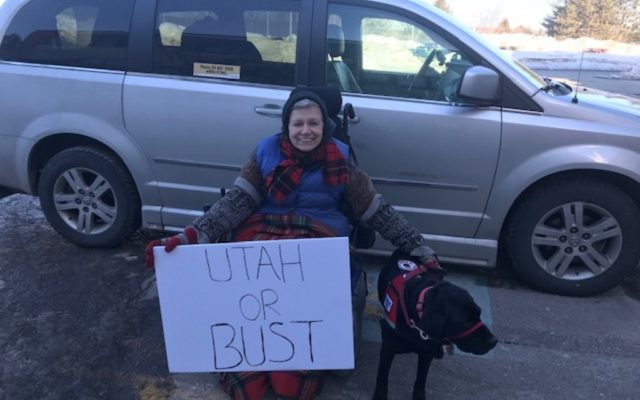 UMPI professor continues to inspire with her ‘beyond limits’ adventures

Melissa Lizotte • February 25, 2019
When Jacqui Lowman reached the summit of Mount Katahdin in Baxter State Park on July 14, 2015, she not only brought together a group of people to help each other achieve the “impossible” but began a journey that soon will take her across the country in an effort to inspire others.

PRESQUE ISLE, Maine — When Jacqui Lowman reached the summit of Mount Katahdin in Baxter State Park on July 14, 2015, she not only brought together a group of people to help each other achieve the “impossible” but began a journey that soon will take her across the country in an effort to inspire others.

Lowman, associate professor of professional communication and journalism at the University of Maine at Presque Isle, became the first person with paraplegia to summit Maine’s tallest mountain with the help of 16 volunteers from Aroostook County. Six of the volunteers were men who carried her using a “PiggyBackPack” carrier. Since then, she also has hiked two sections of the Appalachian Trail in Georgia and Virginia as well as an area separate from the AT known as the Land Between the Lakes in Kentucky.

Lowman and her UMPI students reached out for months to several colleges and recreation groups via email and phone calls before finally recruiting students and a professor from Clemson University in South Carolina for the Georgia AT hike.

For the Virginia hike in Shenandoah National Park she was joined by a professor and student from Murray State University in Kentucky, a college student from New Jersey, a student from Unity College in Maine, and Lowman’s frequent hiking partner, Teri Haravan of Virginia.

Hikers used an improved version of the “PiggyBackPack” known as the “JacPack” to carry Lowman 30 miles through the Georgia section of the AT in March 2017 and 10 miles per day in Shenandoah, testing their teamwork, perseverance and problem-solving skills.

“It has never been about somebody in a wheelchair,” said Lowman, who lives in Washburn. “We all have challenges in our lives, but because of that we tend to put barriers on ourselves and say ‘I can’t do that.’ But challenges really are opportunities to be extraordinary and to help others realize what they can do.”

Now, Lowman is ready to take on another challenge as part of BEYOND LIMITS: Awaken Your Potential, the 501C3 nonprofit organization for which she is the founder. In June 2019, she will embark on a road trip that will take her and her service dog, Saint, through 15 states and five Canadian provinces as part of an effort to spread the message of BEYOND LIMITS. 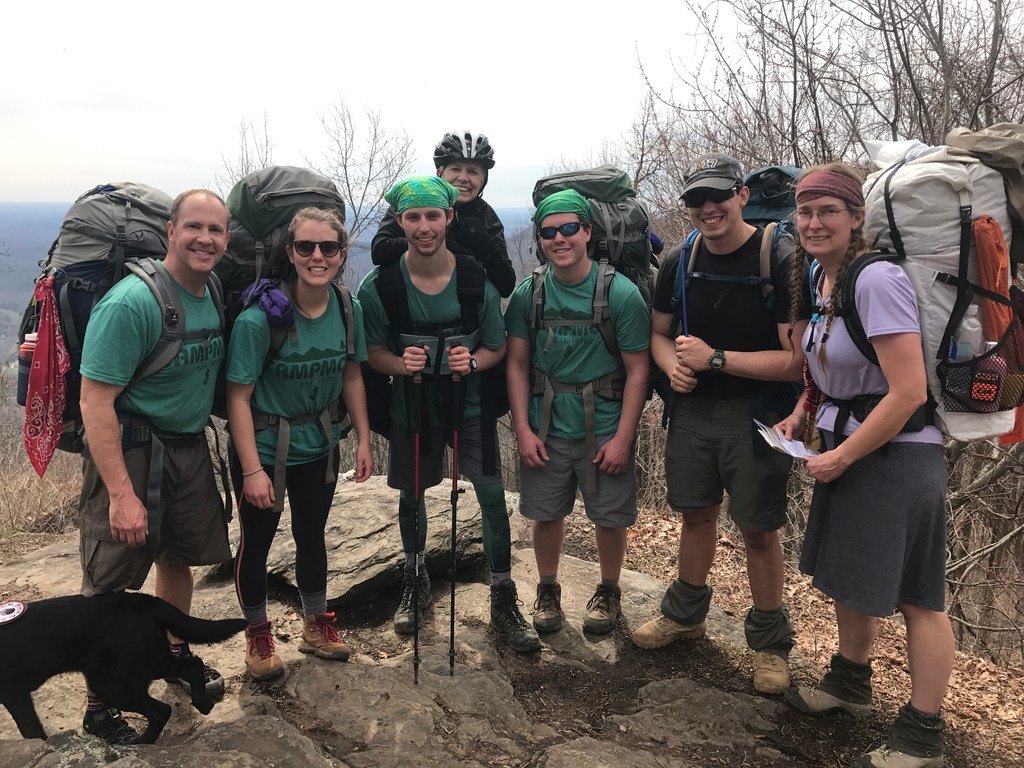 UMPI professor Jacqui Lowman (in the “JacPack” carrier, third from left), poses with fellow hikers during their trek in the Georgia section of the Appalachian Trail in March 2017. Lowman is the founder of BEYOND LIMITS: Awaken Your Potential and has recruited volunteers for several outdoor adventures since climbing the summit of Mount Katahdin in Maine’s Baxter State Park in 2015. (Courtesy of Jacqui Lowman)

Part of Lowman’s inspiration for the road trip came from her long-term goal of one day visiting Cedar City, Utah, where her father, the late Jack Lowman, grew up. Since Lowman is already scheduled to attend an academic conference in Denver, Colorado, in June, she saw the trip as a great chance to finally visit her family’s roots and conduct more pubic outreach for BEYOND LIMITS.

During her trip — which she is calling Back to the Roots — Lowman will drive from Maine and through New Hampshire, Massachusetts, New York, Pennsylvania, Ohio, Indiana, Illinois, and Nebraska before arriving in Denver. After staying in Denver for three nights, she will spend one week each in Utah, Wyoming and Idaho before making stops in Oregon, Montana and the Canadian provinces of Saskatchewan, Manitoba, Ontario, Quebec and New Brunswick.

Although Lowman is open to the opportunity of gaining volunteers for future trail hikes, that task will not be her main focus on the road trip. This semester she has enlisted her two senior professional communication and journalism students — Brandy Smith of Liberty and Garrett DeLong of Presque Isle — to contact community organizations such as Rotary and Kiwanis clubs, youth groups, churches and chambers of commerce. Their hope is to arrange public speaking events for Lowman to interact with local residents and share the BEYOND LIMITS story and philosophy.

Unlike a trail hike where she would mostly interact with her fellow hikers, Lowman wants to use the road trip to meet and talk with folks who might not have ever hiked or who face unique challenges themselves.

“Many people still talk about our Katahdin climb, but not everyone gets inspired to say, ‘I want to climb a mountain or hike the Appalachian Trail,’” Lowman said. “Driving across the country gives you more of a chance to have informal interactions with people.”

Through her many travels aboard her wheelchair accessible van, Lowman has come across folks who have been astonished that a person that relies on a wheelchair and service dog to maintain independence would be able to operate a vehicle herself.

Lowman was born with spina bifida and is paralyzed from the waist down, but moves around independently thanks to her power wheelchair, a hand-controlled van, and Saint. She was first inspired to found BEYOND LIMITS in 2012 after a severe aneurysm forced her into months of rehab, where she had to learn to talk and eat on her own again. 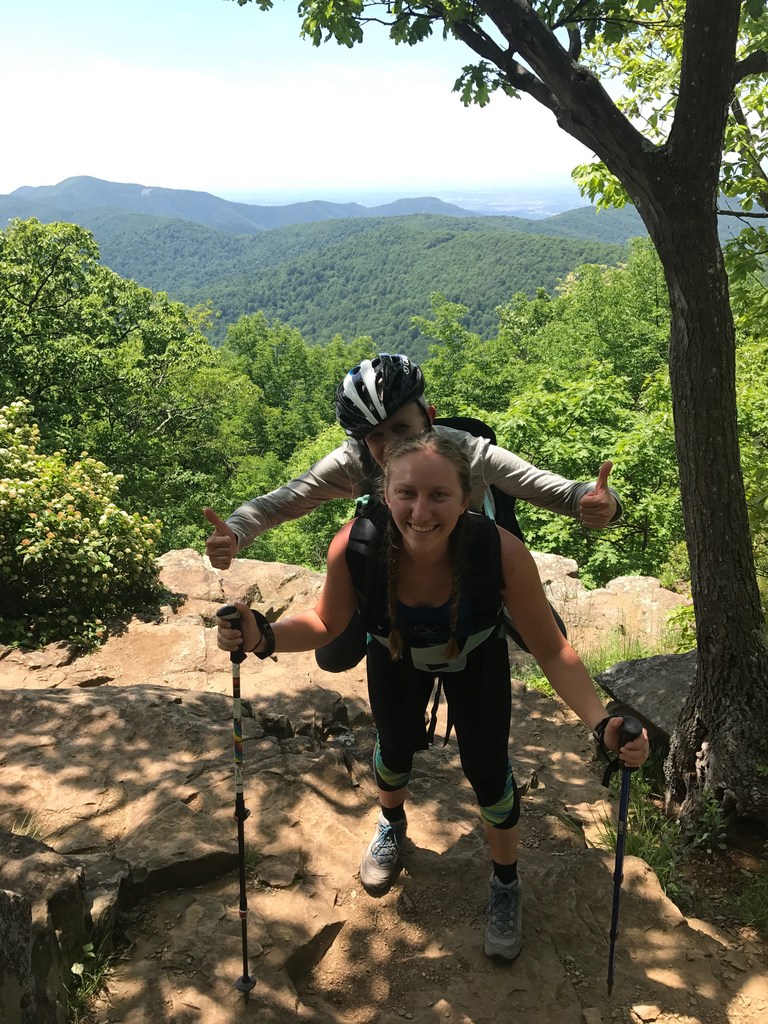 UMPI professor Jacqui Lowman (in carrier) poses atop Loft Mountain in Virginia’s Shenandoah National Park on June 4, 2017, with a fellow hiker. Lowman is the founder of BEYOND LIMITS: Awaken Your Potential and has been part of many outdoor hikes since climbing Mount Katahdin in Maine with the help of 16 volunteers in 2015. (Courtesy of Jacqui Lowman)

Following her recuperation and after stopping at the scenic overlook of Mount Katahdin, located off I-95 in Medway, Lowman realized that she had been given a second chance at life. She felt inspired to use that second chance to bring a team together, climb Katahdin and achieve what many might have assumed to be an impossible feat.

This summer Lowman wants her Back to the Roots trip to educate the public on the challenges that people with physical disabilities face while traveling. Though Lowman’s students have researched and made reservations for hotels along her route that claim to be fully wheelchair accessible, she said she’s learned from experience that not all public places go the extra mile.

“Some places might have a ramp outside but no accessible way to get to the room,” Lowman said. “During the trip I’ll be blogging about those types of experiences. It’s one way of educating people about accessibility.”

Despite the challenges that might come up during the trip, Lowman and her students are hopeful that Back to the Roots is the next step that BEYOND LIMITS needs in order to inspire people to dismiss the word “can’t” from their mindsets.

“I think everyone has something that they don’t believe they could ever achieve,” Smith said. “Through an experience like BEYOND LIMITS, people have realized that they can achieve what they never thought was possible.”

For Lowman, some of the greatest moments of her journey have been in hearing the small ways in which people have gone beyond their own perceived limitations.

“One year after Katahdin, I was volunteering at Relay for Life and a lady, who said she was in her 80s, recognized me and came up to me with her walker. She said, ‘I’m so proud of you honey.’” Lowman said.

“Then she said, ‘I watched you on the news and I told my kids the next morning I would stand up the next morning on my own. And I did,’” Lowman continued. “That’s when I knew that BEYOND LIMITS isn’t just for people who want to climb a mountain. It’s for anyone who wants to do something they’ve always thought was impossible.”

Next year's Caribou City Council will include a new member and a longtime councilor thanks to Tuesday's election.
Pets END_OF_DOCUMENT_TOKEN_TO_BE_REPLACED

Happy fall to you all.  It has been a super beautiful one so far. The harvest has gone well and the temperatures have remained warm, so enjoy these rare days because before long we will be into the winter months, and we all know what that means.
What's Happening This Week END_OF_DOCUMENT_TOKEN_TO_BE_REPLACED