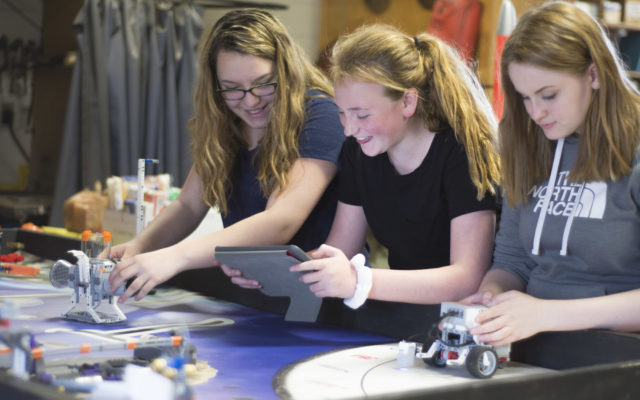 Chris Bouchard • April 1, 2019
Caribou Middle School students are now learning about math, coding, technology, and creative design as part of the school’s new Innovation Center, located in the former shop area in the heart of the building.

CARIBOU, Maine — Caribou Middle School students are now learning about math, coding, technology, and creative design as part of the school’s new Innovation Center, located in the former shop area in the heart of the building. 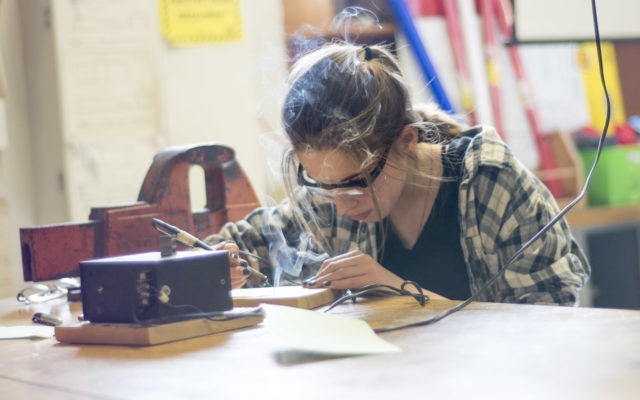 In its current incarnation, the innovation center is somewhat of a prototype of what will be offered in Caribou’s new PreK-8 school, scheduled for completion in mid-2020. The building is set to have its own space dedicated to STEAM (science, technology, engineering, arts and math) activities, and RSU 39 has already hired Maureen Connell as their Innovation Center director.

At first, Connell said she wasn’t asked to start doing classes and activities with students, but soon found herself working with teachers and middle schoolers integrating technology such as 3D printing, LEGO robotics, and programmable mobile spheres into their curriculum.

She said the experience so far has been immensely positive.

“It’s been awesome to be able to learn new things myself,” she said, “and to see kids having a lot of fun with technology and apply their skills in different ways.”

The Innovation Center is not a separate class period like gym or library time, but a resource that all educators can use to augment their classes. For example, CMS fifth graders are learning about the westward expansion in this country, and at the end of the unit they will build their own wagons and create supplies that pioneers would typically bring along for the arduous journey. 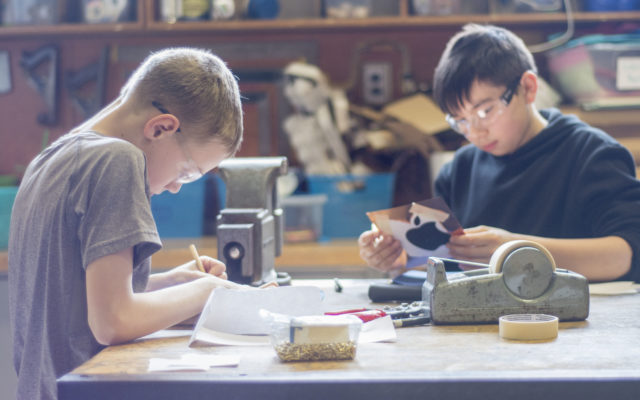 Caribou Middle School sixth graders Brody Anderson, left, and Matthew Ellsworth work on copper projects in the Innovation Center, which involve printing a shape or picture on the copper then cutting out the pictures or shapes and using a hammer and nails to attach the copper pictures to a piece of wood. (Chris Bouchard)

To assist in the project, Connell is using a 3D printer to create well over 100 working wheels and axles that will move the wagons. In time, she said she would like to incorporate Sphero, a spherical robot that can be programmed to move in any direction or pattern, as an “oxen” that would pull the wagon to its westward destination.

As part of the Innovation Center, Connell is incorporating Sphero and LEGO robotics into the middle school’s Computer Science Discoveries curriculum, a program that specializes in many technological areas such as physical computing, programming, HTML, and CSS.

Looking ahead, she said the center won a grant to buy 20 pairs of virtual reality goggles, which will allow students to experience Google Expeditions, an educational tool that lets educators put their students in a 360 degree VR simulation of historical events and embark on a virtual field trip. She added that VR could also allow students to create their own three-dimensional worlds and subsequently share them with classmates.

Though the program was only initiated late last year, it has become a hit among middle schoolers, with many finding time after their lunch break to visit the former shop area and work on projects.

Eighth grader Lillian Haskell said she’s been working on a LEGO robotics project, as well as a project to fix a cupboard for a local food pantry. Overall, Haskell said she loves visiting the Innovation Center and having an opportunity to be creative.

Libby Collier, a seventh grader, said she’s been working on a wood burning project as well as a copper art project.

“When we come down here,” Collier said, “we get to do what we really want to do. We can be in our own world.”

Sixth grader Matthew Ellsworth agreed, and said the center is “a pretty nice place” where students can work on any project they like.

A group of fourth graders are now learning how to code the Sphero robot and using their math skills in a “break out” activity, similar to an escape room, where they solve math problems to obtain clues which will help them open one of several locks sealing a box shut. 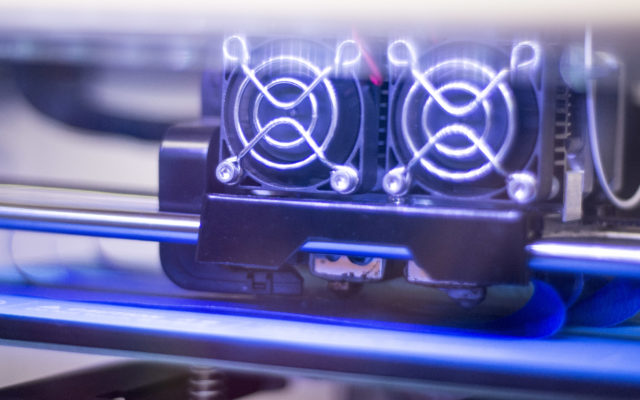 The Caribou Middle School innovation center is equipped with two 3D printers. Here, a printer creates a wagon wheel that students will use as part of their lessons on westward expansion in the United States. (Chris Bouchard)

Xander Jamieson said he learned about coding and fractions, and that, while his first lessons in coding weren’t that difficult, he bets “it will get much harder in the future.”

Jaeda Hunt said the escape room activity was probably her favorite, and that she liked how math was incorporated in the activity. Parker Ouellette enjoyed an activity where he learned how to hold up weights by creating a tower with spaghetti sticks and other materials.

Emily Hite said that, before using Sphero, several rules need to be followed, such as not placing it on a table and controlling it as it could fall down and break.

Baylynn O’Neal said that “when you’re in the Innovation Center, you learn lots of stuff,” and that “you technically have fun while doing school stuff at the same time.”

Lily Coon said she particularly enjoyed coding the Sphero and having control over the speed, angle, and direction, of the small robot.

All the fourth graders unanimously agreed that Sphero was their favorite activity.

The fifth graders said they enjoyed creating the wagon as part of their lessons on the westward expansion.

Madison Thibault particularly enjoyed creating her own materials for the wagon, which included clothes, food, blankets, and tools. 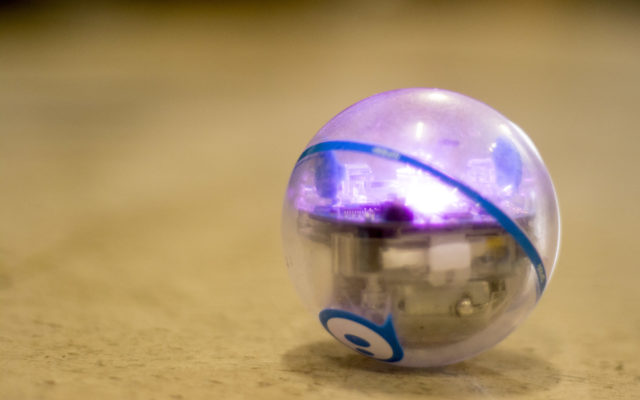 “It was kind of tricky,” said Bell, who added that the experience helped her understand programming.

Tyler Pelletier also enjoyed Sphero, and said it was fun to adjust the speed and other variables.

“It’s a little bit harder because when you program the speed and time it can be challenging,” adding that Sphero is his favorite innovation center activity.

Caribou Middle School Principal Leland Caron complimented Connell on being “way ahead of schedule” in terms of incorporating the Innovation Center with classes.

He said he was particularly inspired by a recent piece on 60 Minutes that focused on STEM fields being dominated by men, and said the Innovation Center may help inspire young girls to pursue a career they may have not previously considered.

“The idea of the Innovation Center is to keep finding new ways to engage the kids,” he said. “It’s hard, because kids have so many interests and we want to expose them to as much as possible.”

Looking ahead, Caron said he would like to look at adding a video club and greenscreen area in the new PreK-9 school.

“We don’t know what tomorrow will look like,” he said, “but most likely, the jobs are going to involve computer education. We hope this will spark their interest and make them say, ‘Hey, this is what I want to do down the road.’”

Next year's Caribou City Council will include a new member and a longtime councilor thanks to Tuesday's election.
Pets END_OF_DOCUMENT_TOKEN_TO_BE_REPLACED

When I wrote the first story of our dog Odie, I didn’t know that I would write a Part 2, but there were so many more stories that I decided more of this little dog’s story needed to be told.
What's Happening This Week END_OF_DOCUMENT_TOKEN_TO_BE_REPLACED