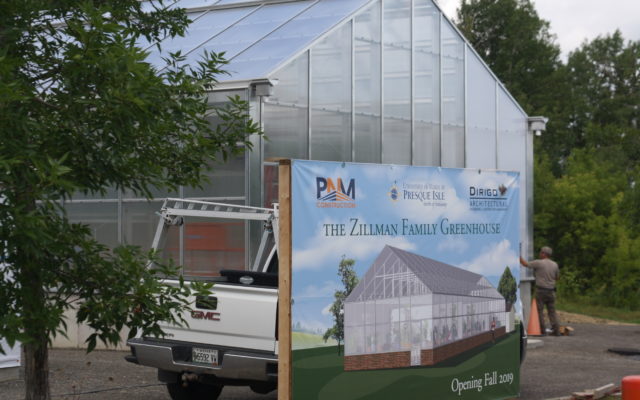 UMPI research greenhouse on schedule for completion in mid-September

Melissa Lizotte • August 13, 2019
The new Zillman Family Greenhouse at the University of Maine at Presque Isle, which will serve the university’s recently established agricultural science and agribusiness program, is on track for completion this fall, according to UMPI officials.

PRESQUE ISLE, Maine — The new Zillman Family Greenhouse at the University of Maine at Presque Isle, which will serve the university’s recently established agricultural science and agribusiness program, is on track for completion this fall, according to UMPI officials.

Local company PNM Construction has worked on the facility since breaking ground in the spring. UMPI director of facilities management Joseph Moir said on Friday that workers have completed at least “60 to 65 percent” of the project and will likely finish by their Sept. 15 deadline, which will allow students to begin using the greenhouse soon after the start of the fall semester. 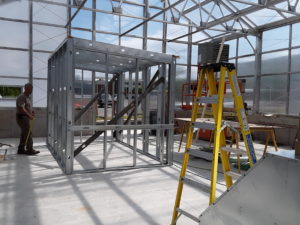 The 2,400-square-foot greenhouse sits adjacent to UMPI’s Gentile Hall and will feature two climate-controlled rooms for agricultural research and a space for classroom labs, community workshops and activities with local FFA and other youth-oriented agriculture groups. Other features will include LED grow light systems and water and ventilation systems.

Jason Johnston, UMPI dean of arts and sciences and associate professor of wildlife ecology, said that the university has been working to develop dual-credit opportunities for students at the Presque Isle and Caribou High School career and technical education programs.

“This greenhouse is the only one locally that’s available for both research and community outreach and education,” Johnston said. “We want to continue making connections with the high school population.”

For UMPI the greenhouse has been a major step in growing their new Bachelor’s degree program in agricultural science and agribusiness.

UMPI has chosen Jim Dwyer, retired crop specialist with the University of Maine Cooperative Extension, to serve as the endowed chair for the agriculture program. Johnston noted that having Dwyer, who has 38 years of experience under the Extension serving Aroostook County, will be an asset to students and the local community. 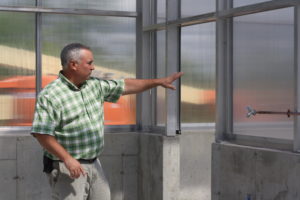 Jason Johnston, UMPI dean of arts and sciences and associate professor of wildlife ecology, explains the layout of the new Zillman Family Greenhouse during a day of construction on Friday, Aug. 9. (Melissa Lizotte image)

“He is excited to help us make connections with many people in the local agricultural community,” Johnston said.

Starting this fall UMPI students will take courses in agribusiness management and the technical operations of agricultural equipment, including safety practices.

The greenhouse is named after former UMPI president Don Zillman and his wife Linda, who were early donors for the $935,000 greenhouse. The project also received funding from the Maine Potato Board, Farm Credit East, McCain Foods, MMG Insurance, the Maine Economic Improvement Fund and Maine Community Foundation.

UMPI will host a ribbon cutting for the greenhouse during its annual Homecoming Weekend at the end of September.

Just when we thought we were out of the woods with kitten season, it has hit full force.  The past few days have been difficult answering the phone and hearing the stories of why people have litters of kittens they need to surrender.
Campaign Corner END_OF_DOCUMENT_TOKEN_TO_BE_REPLACED