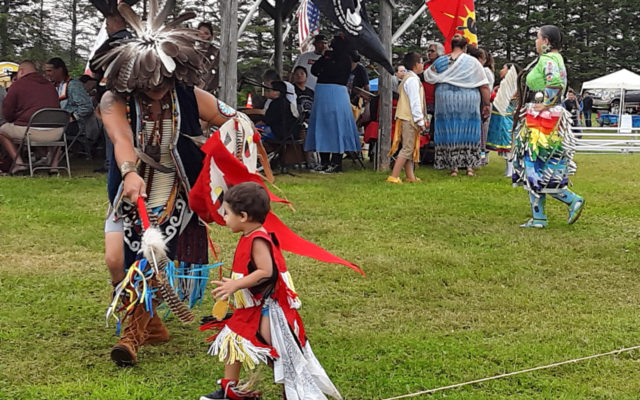 In Micmac, or Mi’gmaw, language the word “mawiomi” means “gathering.” The Micmac tribe traditionally holds Mawiomi during the third week of August, and this year the event drew around 500 people.

Micmac cultural director John Dennis noted that reaching the 25th anniversary of Mawiomi is an important milestone for the tribe. Originally the Powwows were held at Camper’s Paradise in Westfield and now take place at Spruce Haven in Caribou.

One component that has remained consistent is older generations passing down cultural knowledge and traditions to Micmac youth.

“We always let them play and be kids, but they’ll also listen to the elders and learn how to respect them,” Dennis said, during the second afternoon of Mawiomi on Saturday, Aug. 17. “Their culture is part of who they are and so we want to continue passing down what our elders taught us.”

Barbara Paul, instructor for the Little Eagles, brought several current and former students to perform. The group traveled to Caribou from Perry, and Paul noted that music is a crucial part of passing down Native culture to younger generations.

“We need to keep what we have because we lost so much of our culture in the past,” said Paul, who attended the Micmac Mawiomi for the first time this year. “It’s wonderful to see people together.”

One of Paul’s former drumming students, Larry Robichaud, has continued to teach Passamaquoddy youth about their traditional music. He said he has attended Mawiomi often and plans to keep up the tradition.

Just when we thought we were out of the woods with kitten season, it has hit full force.  The past few days have been difficult answering the phone and hearing the stories of why people have litters of kittens they need to surrender.
Campaign Corner END_OF_DOCUMENT_TOKEN_TO_BE_REPLACED