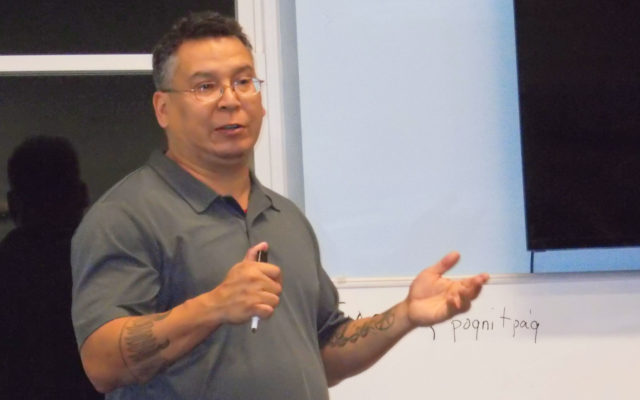 Melissa Lizotte • September 18, 2019
Considering the words of wisdom he has received from family members and close friends over the years, John Dennis of Presque Isle recalls advice from his uncle, Martin Dennis, who passed away earlier this year.

Considering the words of wisdom he has received from family members and close friends over the years, John Dennis of Presque Isle recalls advice from his uncle, Martin Dennis, who passed away earlier this year.

“He told me to be the man I wished I had when I was younger,” said Dennis, who is now the cultural director for the Aroostook Band of Micmacs.

Dennis grew up in the Eskasoni Mi’kmaw Nation in Cape Breton, Nova Scotia, where he was raised by his mother and formed bonds with many members of his extended family. Although he remembers being part of many traditional Micmac customs such as seasonal fishing and listening to stories from elders, he did not become fully immersed in tribal ceremonies, spirituality, culture and history until moving to the Micmac community in Presque Isle decades later.

Today Dennis sees himself as a teacher for his community. He offers classes on Micmac language and culture, helps coordinate events and leads groups for folks in recovery from addiction. In his early school years on the reservation, he learned from many teachers who taught him the traditional Micmac, or Mi’gmaw, language and encouraged him to embrace his own culture.

“Some of my biggest early influences in school were teachers like Dorothy Moore and Barbara Sylliboy. They taught us the Mi’gmaw language and had us speak that language in our classes,” he said. “Back then I didn’t understand the impact of those lessons, but now I’m thankful for the opportunity to pass on the language.”

Teaching Mi’gmaw to generations both young and old has become one of Dennis’ missions as cultural director. He has taught language classes at the local Boys and Girls Club and Little Feathers Head Start program, and often finds the most rewarding moments are when he hears children use Mi’gmaw in their everyday lives.

Dennis also helps plan traditional tribal events such as the Aroostook Band of Micmac’s annual Mawiomi of Tribes in August, community gatherings and educational tours at the museum located in the Micmac Cultural Community Education Center.

Through discoveries about his culture, history and spirituality, he was able to move past one of the most challenging periods of his life.

“I started abusing alcohol and drugs when I was 15 or 16 and it wasn’t until 20 years later that I become completely sober,” he said. “I would couch surf from one place to the next and I got tired of that lifestyle.”

When he realized he needed to change, he remembered his uncle’s advice.

“My son was only a year old and I asked myself what type of father I wanted him to have,” Dennis said.

Due to limited work opportunities in Nova Scotia, Dennis moved to Aroostook County, where his mother had been living for many years. Influenced by the work ethic of the uncles he grew up around, he earned an associate’s degree in carpentry from Northern Maine Community College and became the Micmac cultural director in 2009.

After two years, he decided he and his community would benefit more if he studied education formally. He left his position to attend the University of Maine in Orono, from which he earned a bachelor’s degree in elementary education. He returned to Presque Isle and became cultural director again in 2016.

Though Dennis attended Alcoholics Anonymous meetings while in recovery, Micmac elders were the people who encouraged him to truly begin the healing process. He now uses his position with the Aroostook Band of Micmacs to promote healthy habits for local youth and to start 12-week “Well-Briety” meetings for adults in recovery.

“It’s sad that drugs have taken so many families and drifted them apart,” Dennis said. “I encourage young people to live a good life and to think about what type of person they want to be for their family and community.”

For Dennis, no matter who he teaches he wants to instill the lessons of the Mi’gmaw Seven Sacred Teachings: love, honesty, truth, wisdom, courage, humility and respect.

“The Aroostook Band of Micmacs helped me and so I owe them the best of what I can give them,” he said.

Next year's Caribou City Council will include a new member and a longtime councilor thanks to Tuesday's election.
Pets END_OF_DOCUMENT_TOKEN_TO_BE_REPLACED

When I wrote the first story of our dog Odie, I didn’t know that I would write a Part 2, but there were so many more stories that I decided more of this little dog’s story needed to be told.
What's Happening This Week END_OF_DOCUMENT_TOKEN_TO_BE_REPLACED