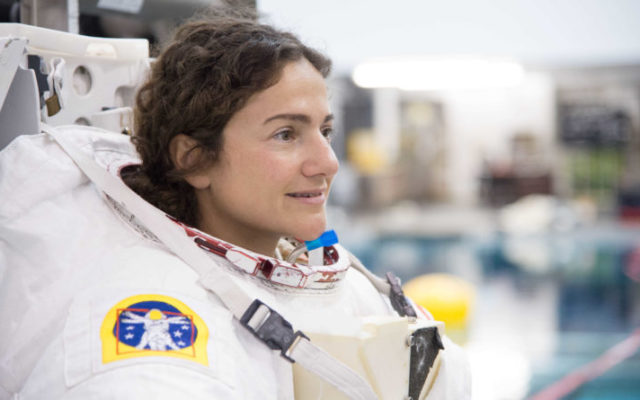 Maine astronaut Jessica Meir is going into space Wednesday. Here’s what you need to know.

Chris Burns • September 24, 2019
Jessica Meir on Wednesday morning will soar far above the gentle slopes of her native Caribou and towering Katahdin to heights most Mainers could only dream of.

Jessica Meir on Wednesday morning will soar far above the gentle slopes of her native Caribou and towering Katahdin to heights most Mainers could only dream of.

Meir, a member of NASA’s 21st class of astronauts, will board the Soyuz MS-15 spacecraft at the Baikonur Cosmodrome in Kazakhstan for her 220-mile journey to the International Space Station orbiting this little blue ball we call home. She will be joined Russian cosmonaut Oleg Skripochka and Emirati astronaut Hazz Al Mansouri.

It marks her first space flight, and she will return home in early 2020.

Here’s what you need to know about Meir and her upcoming mission.

Who is Jessica Meir?

Meir, the valedictorian of Caribou High School’s Class of 1995, was among three women and four men selected from 6,100 applicants in 2013 for NASA’s 21st class of astronauts and to begin training for future space flights. That came only four years after Meir first applied but was rejected for NASA’s 20th class of astronauts.

Long before she tried to join the ranks of elite astronauts, Meir participated in the space camp at Purdue University in Indiana before starting her freshman year at Caribou High School, and she also took part in a six-week summer camp at the Kennedy Space Center in Florida between her sophomore and junior years at Brown University in Rhode Island.

Meir has a degree in biology from Brown University, a master’s in space studies from the International Space University in Illkirch, France, and a Ph.D. in marine biology from the Scripps Institution of Oceanography in San Diego.

Lauren Harnett | NASA
Jessica Meir works with survival gear that will help sustain her for three days in the wilderness during a survival training exercise as part of her astronaut training near Rangeley, Maine, on Aug. 27, 2013.

In her research, she has spent time in the Aquarius underwater habitat off Key Largo, Florida, traveled to Antarctica to study emperor penguins’ adaptations to long underwater dives and even raised a flock of high-altitude flying geese to determine how the birds are able to withstand the physiological pressures of flight patterns taking them up and over the Himalayas.

What is her mission?

NASA announced in April that Meir would make her first journey into space. Meir and her fellow astronauts will support about 250 experiments aboard the space station that NASA says aren’t possible here on Earth and may even prove crucial to enable deep space missions to the moon and Mars.

When is Meir going into space?

Meir, Skripochka and Al Mansouri are scheduled for launch at 9:45 a.m. Eastern Daylight Time, or 6:57 p.m. Kazakhstan time, according to NASA. Their journey to the International Space Station will take six hours and four full orbits around the planet.

Allison Bills | NASA
NASA astronaut Jessica Meir trains inside the Space Vehicle Mockup Facility at NASA’s Johnson Space Center. She has been assigned to her first spaceflight, and will launch to the International Space Station on Wednesday.

You can watch the space launch at NASA.gov/live or at the Bangor Daily News’ website.

Meir will stay aboard the space station for six months.

Have other Mainers gone into space?

Yes. Meir is among at least three Maine natives to become astronauts, the others being Christopher Cassidy, a York High School graduate who has completed six spacewalks and served as the nation’s chief astronaut from 2013 to 2017, and Charles O. Hobaugh, a Bar Harbor native who has made three spaceflights. Bridget Ziegelaar, a graduate of Old Town High School, is an operations manager for International Space Station Research Integration at NASA.

Bill Stafford | NASA
Even wearing a 350-pound space suit, astronaut Jessica Meir was buoyant in a pool at NASA’s Johnson Space Center in Houston on Jan. 23, 2017, when she practiced tasks she could perform on the International Space Station.

Maine is more than eight months into Medicaid expansion under the federal Affordable Care Act and trends around who is enrolling and where they live are starting to emerge, bucking some expectations and pointing out access challenges.
Pets END_OF_DOCUMENT_TOKEN_TO_BE_REPLACED