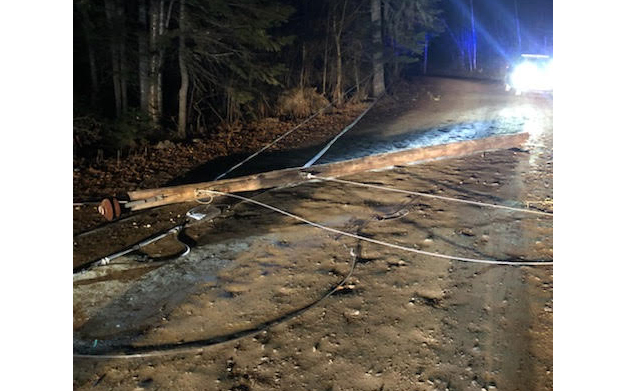 Jessica Potila • October 28, 2019
The driver of a vehicle that allegedly knocked over a utility pole in Cross Lake turned himself in after police requested information on social media about the crash.

CROSS LAKE, Maine — The driver of a vehicle that allegedly knocked over a utility pole in Cross Lake turned himself in after police requested information on social media about the crash.

Deputy Sheriff Michael Delena responded to a report of a motor vehicle crash on Cyr Road on Saturday, Oct. 26, shortly after 11 p.m. Deputy Delena investigated the accident and discovered a utility pole had been completely broken off and was in the roadway, with no vehicle near the scene.

The ACSO posted on social media a plea for anyone with information about the incident to contact them.

Eric Davenport, 49, of Cross Lake called the Aroostook County Sheriff’s Office on Monday, Oct. 28, to report that he was the driver of the vehicle that knocked over the pole on Saturday evening.

Davenport was westbound on the Cyr Road in Cross Lake in his 2019 GMC Sierra pickup when he lost control and the vehicle struck the pole, according to a police report.

Davenport indicated to deputies that he was not aware that he had damaged the pole until the next day.

Only one member of Maine’s congressional delegation had come out in favor of impeaching President Donald Trump ahead of House Speaker Nancy Pelosi’s Tuesday announcement that the Democratic-led House of Representatives would begin an impeachment inquiry.
Pets END_OF_DOCUMENT_TOKEN_TO_BE_REPLACED