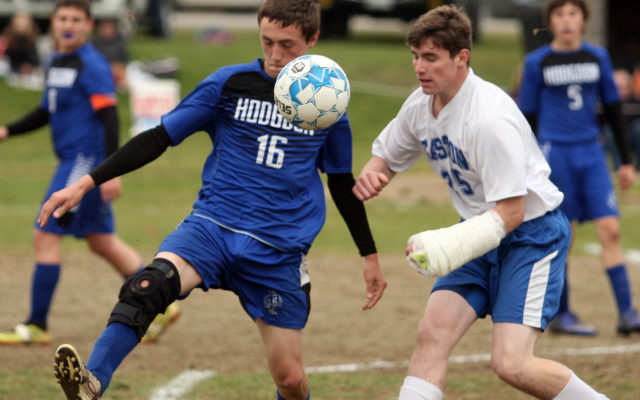 Joseph Cyr • November 4, 2019
Hopes of an upset were not meant to be for the Hodgdon boys soccer team Saturday as the No. 4 Hawks fell to top-ranked Penobscot Valley 3-1 in a Class D North semifinal.

HAMPDEN, Maine — Hopes of an upset were not meant to be for the Hodgdon boys soccer team Saturday as the No. 4 Hawks fell to top-ranked Penobscot Valley 3-1 in a Class D North semifinal.

Played at Hampden Academy, the Hawks were sent off in style early Saturday morning with a police and fire escort from Hodgdon High School to Interstate 95 for the trek south to Hampden to take on the Howlers of Penobscot Valley.

“PVHS is a tough team with several players who are extremely quick and handle the ball well,” Hodgdon coach Jason Little said. “Our guys were pleased with how (the game) went and were happy to have the experience they did.”

The Hawks lost starting fullback Lucas Ramsey to a knee injury early in the game. His replacement, Hunter Tapley, also exited the game with a knee injury a short time later. The Hawks were already short midfielder Jeremiah Goff, who injured his side during the Hawks’ quarterfinal game with Easton and was unable to go against the Howlers.

“We had a lot of players with limited experience, especially in a big game like this, play a lot of minutes. They filled in great and everyone gave their all. They worked so hard this year and dealt with changes and adversity,” coach Little said. “I am pleased with how the team responded to those challenges and the history they made by making it that far in the playoffs.”

Hodgdon ends its season with a 14-2 overall record.

Just when we thought we were out of the woods with kitten season, it has hit full force.  The past few days have been difficult answering the phone and hearing the stories of why people have litters of kittens they need to surrender.
Campaign Corner END_OF_DOCUMENT_TOKEN_TO_BE_REPLACED