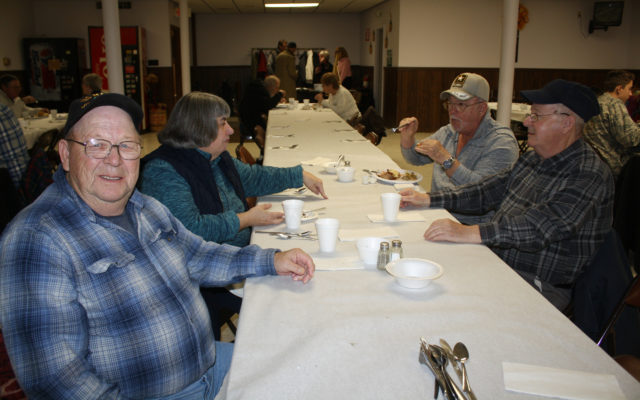 Presque Isle Elks Lodge exalted ruler Alan Harding said that the lodge has hosted a Veterans Day dinner for the past six years. The tradition began after lodge members realized that no one else was hosting an official dinner for veterans in the Presque Isle area. November is Elks Veterans Remembrance Month.

For Harding, Veterans Day is a time to remember his father, the late Floyd Harding, a World War II veteran, and his late brother Mark Harding, who served in the U.S. Navy during the Vietnam War and died this past spring.

“It’s crucial that we understand the sacrifices that all our veterans have made,” Harding said.

More than 50 veterans and family members gathered at the Elks Lodge to enjoy a menu of grilled moose steaks, ployes, baked beans, corn chowder, seafood chowder, chopsuey and other moose recipes. Kenneth Dean of Mapleton attended the dinner with his wife, Louise, brother Charles Dean and their friend Terry LaPointe.

Kenneth Dean served in the U.S. Marines from 1965 to 1968 in Vietnam during the Vietnam War.

“I came here in honor of all the veterans who could not make it here tonight,” he said.

Charles Dean, also of Mapleton, served in the U.S. Army from 1967 to 1969 in West Germany. He said that the Elks Lodge dinner has become an important tradition for him and his brother.

“We’re here because there are a lot of people who died so that we could be here,” Charles Dean said.

A few years back the Ark was gifted with something that we never dreamed possible. It is a gift that left us speechless and opened a whole new door for us.
Campaign Corner END_OF_DOCUMENT_TOKEN_TO_BE_REPLACED