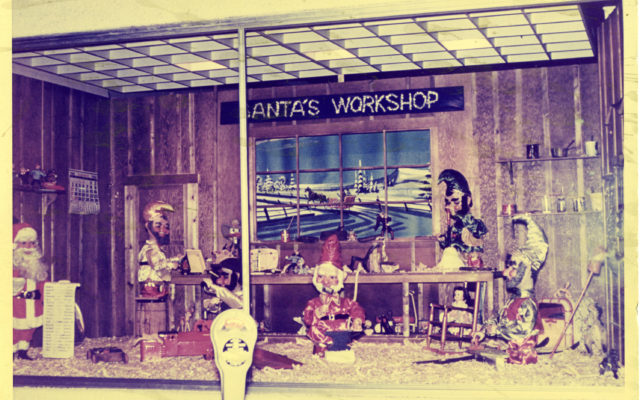 Jen Lynds • December 24, 2019
Kathy Halverton of Lynn, Massachusetts, finds her thoughts drifting back to Aroostook County and “her favorite past holiday tradition” throughout the month of December.

HOULTON, Maine — Even though she doesn’t live in the area anymore, Kathy Halverton of Lynn, Massachusetts, finds her thoughts drifting back to Aroostook County and “her favorite past holiday tradition” throughout the month of December.

Whenever she tries to explain it to friends or coworkers, she “can’t seem to find the words to recreate how magical it really was.”

Those memories? The animatronic elves that once had a shop every year in the large picture window in the former Dunn Furniture Company.

“I am just guessing, but I bet that a lot of kids that grew up in the 1960s like I did remember those displays fondly,” she said on Wednesday. “It was just so magical for a kid to come to the store one day and see furniture or something in the window and the next you have these moving elves and Santa Claus and other wintry scenes. I was so amazed when I was a child that they could make the elves move.” 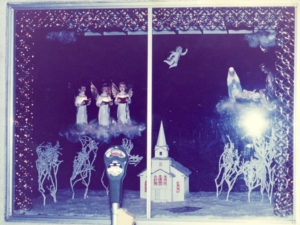 This 1963 photograph shows the wooden church in the window of Dunn Furniture Company as part of a holiday display. (Contributed photo)

The displays, which first began when the store was located on Main Street in Houlton, were created each year by Ronnie Craigs, an engineer who worked for the company, along with Clayton “Chick” Currie, the store manager.

The displays included Santa’s workshop with moving elves repairing toys, skiers whipping down mountainsides and a scene based on the nursery rhyme about a little old woman who lived in a shoe.

The displays grew smaller after the company moved to its final location on North Street in the late 1980s, and ceased when both of their creators retired in the early 1990s. The store closed in 2018 after 110 years in business.

Martha Hayes of Houlton said on Wednesday that her favorite holiday tradition was going with her parents and siblings to watch the parade each year.

“Back when I was growing up, the town didn’t have the light parade like they do now,” she said. “The parade was held during the day, and my family would always park in the McDonald’s parking lot, have lunch first and then watch and see Santa come in. It didn’t matter how cold it was, we were all bundled up standing outside the car, hoping that Santa would see us and wave.” 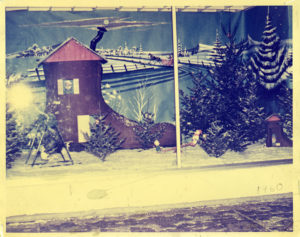 This 1960 photo captured a display based on the nursery rhyme about an old woman who lived in a shoe that was featured in the window of Dunn Furniture Co. in downtown Houlton. Each holiday season for many years beginning in the 1950s, the business featured animated displays that some area residents still remember fondly. (Courtesy of Frank Dunn)

“We never missed it,” she said. “My parents would bundle my brother and I up, make a Thermos of hot chocolate and take us to the light parade. My favorite display was to see the largest fire truck that would usually be in the parade, all decorated with lights. It looked so magical. I can’t imagine how long it takes to do that, but it has created great memories for us as a family.

“Even though my brother lives in southern Maine now, he still tries to get up here each year to see the light parade.”

Caribou resident Danielle Hernandez said that her favorite holiday tradition involved giving back to those in need.

“My parents started early teaching me about giving whenever possible,” she said. “I was allowed to go to the Aroostook Centre Mall each year and pick a ticket off the Christmas tree that had a gift that a child in need wanted. My mother and I would go shopping for it and we’d wrap it together. When I was young, my parents paid for the gift, but once I got a job as a teenager I paid for the gift. I still do this, and I also repeat the tradition with my two children.”

June is generally a month that also marks the height of “kitten season,” when large litters of kittens are born and often end up in animal shelters.   Luckily, here at the Central Aroostook Humane Society, we have seen a dramatic drop in the cat population over the past five years, mostly due to our spay and neuter program.
What's Happening This Week END_OF_DOCUMENT_TOKEN_TO_BE_REPLACED