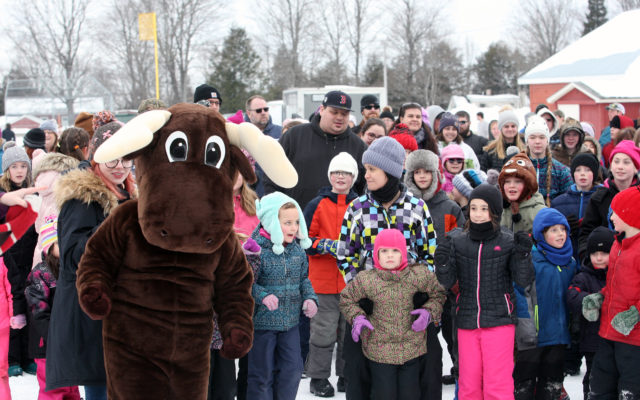 Joseph Cyr • February 3, 2020
Snowsled rides, hayrides, ice skating and cross country skiing were also popular attractions for young and old alike. All of the events in the park were free to the community.

Sunday’s extremely mild temperatures resulted in above-average crowds at Houlton Community Park for a day of outdoor activities, organizers said. Derby Hill bustled with activity throughout the day, with a steady stream of eager sledders.

“The committee feels the weekend was a great success,” said Nancy Ketch of the Moosestompers committee. “We believe these were the biggest crowds we had seen in a few years, probably thanks to the warmer temperatures. All activities were very busy and we saw lots of smiling faces. That’s what it’s all about.”

Snowsled rides, hayrides, ice skating and cross country skiing were also popular attractions for young and old alike. All of the events in the park were free to the community.

Isabella White and Chloe Wotton, both of Houlton, were among the first at the park Sunday to get in some sliding on Derby Hill before the crowds showed up.

“I love when people slide down the hill and everyone flips over,” White said. “It was funny seeing my dad trying to fit in a flying saucer.”

“It was cool we were the first ones here,” Wotton said. “I like sliding the best.”

The half-dollar coin scramble was once again a popular attraction for those 13 and younger. Children were divided into age groups for a chance at collecting some of the 900 half-dollars that were up for grabs thanks to the generosity of many local businesses. Other prizes included T-shirts, stuffed animals and McDonald’s gift cards.

Volunteers with Vital Pathways, a non-profit group that develops and supports healthy communities in northern Maine, were on hand to pass out free coffee and hand warmers to people this year.

“We have done this for quite a while,” said Vital Pathways member Audrey York. “We love to help out and be close to the community.”

The Moosestompers Fishing Derby also proved to be another big hit this year. Anglers were able to fish their choice of Nickerson Lake, Drews Lake and Mill Pond for the competition.

Chris Putnam, one of the organizers for the fishing derby, said this year’s attendance was among some of the best he has seen since he started working with the derby. An exact number of anglers was not available. Fishermen were able to enter multiple fish in the derby.

The $500 cash raffle was won by Carson Tarr, while the Soucy’s Auto car starter was won by Lisa Rouse and the ice shack went to Curtis Harrison.

Ketch said the committee is already starting to think of ways to improve next year’s activities, since it will be the 25th annual  event.

“We will be holding a wrap up meeting to critique how things went,” she said. “The committee will be setting the date for the 2021 event which will be the 25th annual Moosestompers.  We encourage anyone with ideas to let us know and also invite those interested to get involved in the planning.”

Next year's Caribou City Council will include a new member and a longtime councilor thanks to Tuesday's election.
Pets END_OF_DOCUMENT_TOKEN_TO_BE_REPLACED

Happy fall to you all.  It has been a super beautiful one so far. The harvest has gone well and the temperatures have remained warm, so enjoy these rare days because before long we will be into the winter months, and we all know what that means.
What's Happening This Week END_OF_DOCUMENT_TOKEN_TO_BE_REPLACED