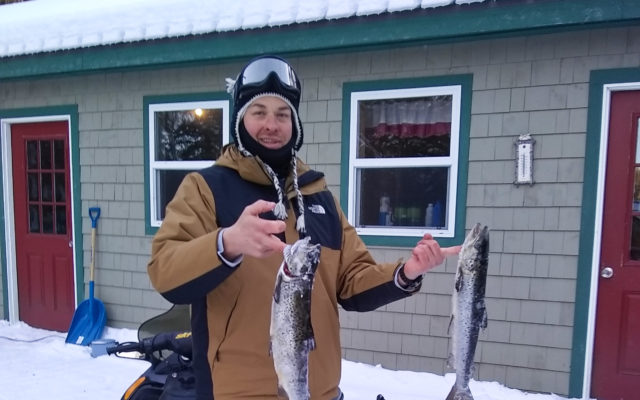 The town announced plans to create the landing area in January as a way to better serve residents in need of emergency transportation to hospitals.

“The fund-raising event was a great success,” said Danforth Town Manager Ardis Brown. “Even at temperatures of minus 30 degrees, East Grand Lake was bustling with fishermen. There were a lot of local fishermen as well as some from central Maine, Down East Maine, Massachusetts, Texas and even Florida.”

Brown said that most participants expressed their enjoyment of the event, which raised $1,837 for the landing pad. She added the ice shacks came in a variety of sizes and shapes, including some high end “Cadillac versions” that were well stocked with wonderful smelling food.

“One group was even cooking up gourmet burgers,” she said. “It was fun to see everyone having such a great time. At the end of the day, 52 fishermen registered to participate in the derby.”

Prize winners were as follows:

Carmen Collins of Danforth donated a handmade quilt for raffle, which was won by Pamela Dahl. A special thanks to Mike Cowger and Cowgers’ Lakefront Cottages for letting us set up and use one of their buildings for the day.

Next year's Caribou City Council will include a new member and a longtime councilor thanks to Tuesday's election.
Pets END_OF_DOCUMENT_TOKEN_TO_BE_REPLACED

I know many of you have followed DeeDee’s story. DeeDee had leukemia and was under vet care for the past few weeks. Early one recent morning, she lost her battle with leukemia.
What's Happening This Week END_OF_DOCUMENT_TOKEN_TO_BE_REPLACED