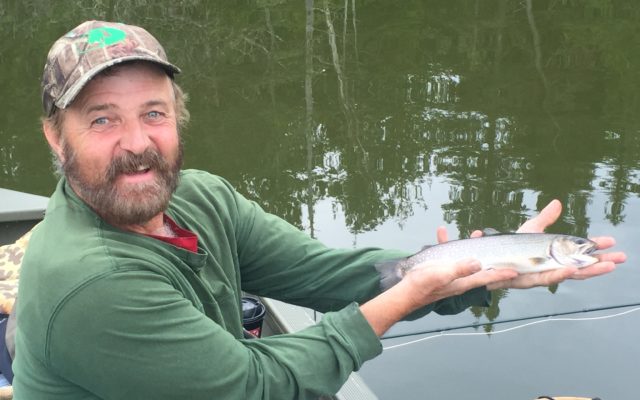 Open water fishing is a mite early in The County

Bill Graves, Special to The County • March 30, 2020
I’m pretty sure the guy who came up with the idea of open water fishing season beginning on April 1 each year wasn’t from Aroostook County.

I’m pretty sure the guy who came up with the idea of open water fishing season beginning on April 1 each year wasn’t from Aroostook County. I also think he had a bit of a cruel sense of humor. Think about it. April Fool’s Day? While it may be spring down in southern Maine, it’s still winter up here and open water is scarce as green grass. Now, to add insult to injury, the state fisheries folk have opened this spring’s season early, and no license is required.

Maine’s recreational anglers could hit the waterways March 21 and the free fishing lasts until April 30. It’s a nice gesture and a great chance to enjoy outdoor recreation, considering the current confining rules and regulations imposed because of the COVID-19 virus situation. Since most Crown of Maine lakes and ponds won’t clear of ice until around Mother’s Day, the trick to taking full advantage of this unprecedented early free fishing is going to be locating some safe, open water for casting.

Since ice fishing remains available until the end of March, many sportsmen will take full advantage of that, but others are planning ahead. April is mud season. It’s not unusual to get a freak snowstorm at some point but longer daylight hours and warmer sun aids melting. Brooks and streams will be free flowing well before the lakes, so these are the spots to visit and dip a line. Since most are fast and murky, the trick is to pinpoint a spot that will hold trout and can be approached and fished safely.

Despite the sun it’s still April, the wind is brisk, the weather cool, and the water temps frigid. Fishermen need to dress warmly in layers and waders should be insulated or heavy neoprene for comfort. When a boat or canoe is used, flotation devices are a must, and not a bad idea even when wading swift moving runs. At least consider using a wading staff for balance during freshet conditions. 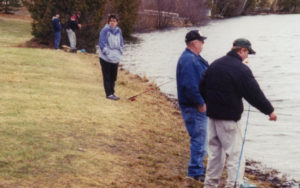 At some point each April, ice clears away from the edge of several small ponds. These local spring anglers try out Echo Lake to catch the first brook trout of their season. (Courtesy of William Graves)

Fish are going to be bunched up in the slow-moving, calmer waters. Coves, eddies, backwaters and bogans offer prime casting areas. The bank edges along faster, deeper pools and below islands offer other top rate holding areas. Trout and salmon aren’t going to move far in the cold water to grab a bait. They are opportunistic feeders during spring run-off conditions. They set up in calmer runs so the natural current flow will bring insects, nymphs, worms and bait fish right to them. It’s crucial to success for anglers to place their lures, flies and especially live worms and minnows low and slow in the stream where water speed is minimal.

Fishermen who just have to be early birds will find a handful of spots accessible to wading and casting. Action is likely to be a bit slow, but after a long winter an outing is often more about the effort than the result. The Prestile Stream offers two locations that prove productive every spring, the pools below the Mars Hill and Robinsons dams. Each spot can handle two or three anglers without crowding, and at this time of year it’s possible to have a spot all to yourself.

There are a handful of open runs on the Meduxnekeag River in Houlton as well. This waterway offers the chance to hook a hefty brown trout as well as a brook trout. Those near Fort Kent will find a couple of stretches of the Fish River open to wading or even casting from shore, as well as a run or two near Soldier Pond. The Aroostook River winds its way through several towns and villages, tending to be more fishable via boat. If it’s a dry spring and the water levels recede steadily, there are a few spots where shoreline bait casting provides action.

Although spring weather changes each year, warm days with rain and wind to disperse ice will help small lakes and ponds break up around mid-April. Echo Lake in Aroostook State Park, Hanson Lake in Mapleton, Monson Pond in Fort Fairfield, Carry Lake in Littleton and Black Lake in Fort Kent are likely local spots to check out. Most are heartily stocked with good size brookies and for a week to 10 days after ice clears, trolling from canoes or casting from shore ought to be productive.

One need only gaze out a window to know spring has yet to arrive in Aroostook, but there is hope on the horizon. After self-sequestering ourselves week after week, communing with Mother Nature, a fishing rod in hand, should be all the sweeter and more satisfying. Now that’s the type of isolation a sportsman can really appreciate.

A few years back the Ark was gifted with something that we never dreamed possible. It is a gift that left us speechless and opened a whole new door for us.
Campaign Corner END_OF_DOCUMENT_TOKEN_TO_BE_REPLACED