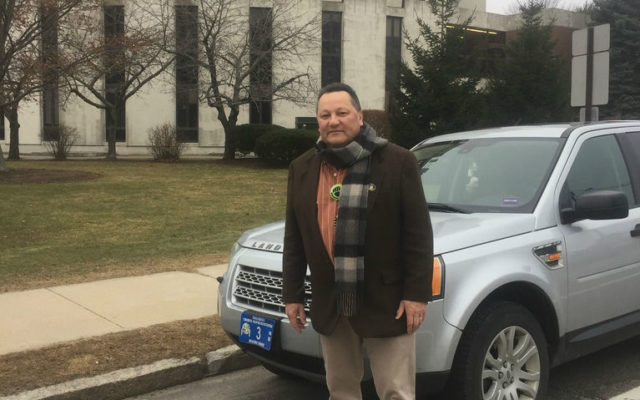 Alexander MacDougall • June 3, 2020
Henry John Bear has made history by becoming the first member of the Houlton Band of Maliseets to obtain a Master’s of Law Degree.

HOULTON, Maine — Henry John Bear has made history by becoming the first member of the Houlton Band of Maliseets to obtain a Master’s of Law Degree.

The poverty and discrimination he witnessed in his youth inspired him to obtain his degree, Bear said. He wants to advocate for the Maliseets as well as teach and raise awareness about Maliseet issues and treaties with the United States.

“My concern has always been, from a young age, to try and help alleviate the situation for my people,” Bear said. “The master’s degree is just a continuation and a natural progression of my effort to participate in and be more competent in doing so.”

Born on the Maine side of the international border with Canada with seven siblings, he spent his childhood in a series of foster homes before attending Edward Little High School in Auburn. He then served in the United States Coast Guard, before obtaining a law degree from the University of New Brunswick in 1990.

He also served as a member of the Maine House of Representatives from 2013 to 2019 as the assistant minority leader for the Green Independent Party. Following this stint in politics, he enrolled in the University of Maine School of Law in Portland, where he focused on international law and treaty law.

The Maliseet tribe has a treaty signed with the governors of Massachusetts Bay that dates back to 1776 — the Treaty of Watertown — shortly after the country declared independence from Great Britain. The treaty called for an alliance between the tribe and the newly formed United States, and for the tribe to provide troops to serve in George Washington’s continental army.

“It’s a treaty that people need to know about because it hasn’t been given the priority or even [been] considered in too many instances, including the Maine Indian Claims Settlement Act of 40 years ago,” Bear said. He was citing the law passed in 1980 that removed some aboriginal land claims in Maine in exchange for the allocation of $81 million to the various Maine tribes, though there are some land parcels that tribes have the sole rights to use or actually own.

But Bear contends the 1776 treaty — in which one of his ancestors, Ambrose Bear, was a participating member — is still valid and grants the Maliseets autonomy over their land. He quotes James Bowdoin, the governor of Massachusetts (which included Maine at the time) and namesake of Bowdoin College, as saying that the treaty will be in effect “as long as the sun and moon shall endure.”

“There’s a push right now to have a discussion to deal with this, to basically reopen the 40-year-old Maine Indian Claims Settlement Act,” he said. “There are problems all along the way that tribal lawyers and tribal representatives apparently didn’t either recognize or wanted to discuss, and as a tribal lawyer I’ve been looking into this and I’ve seen that there are serious issues.”

Bear also supports the Maliseets being able to own and operate their own casino on their territory, believing that it would help alleviate poverty. Gambling is an inherent part of Maliseet culture, he said.

“It has been studied and proven that it would be lucrative and successful,” Bear said, regarding a hypothetical casino on the territory. “We’re going to look at $20 million in net profit and create 100 jobs.”

The Maliseet tribe has been trying to build a casino in the Houlton area since 2013, but attempts have been stifled in Maine’s court system, which contains much legal groundwork for how to build and develop casinos. Two private casinos exist in Maine — the Hollywood Casino in Bangor and the Oxford Casino in Oxford. Neither are owned by native tribes.

Having now obtained his master’s degree, Bear plans to teach at the Aroostook Treaty Education Center, a non-profit organization meant to educate the public about the existing treaties, both with the Maliseets and other tribes around Aroostook County. The center is located in Houlton.

“There was a law passed in 2001 to teach Indian history in Maine public schools, but there isn’t funding to carry the law,” Bear said. “So the treaty center will work to try and supplement that. My master’s degree will provide a more effective basis to do that.”

Recently we took in a cat named Joe. He is a very sweet cat with a multitude of problems. He was rescued from the streets here in town, but Joe turned out to be a very sick kitty and was surrendered to The Ark because the resources were not there to help him.
What's Happening This Week END_OF_DOCUMENT_TOKEN_TO_BE_REPLACED