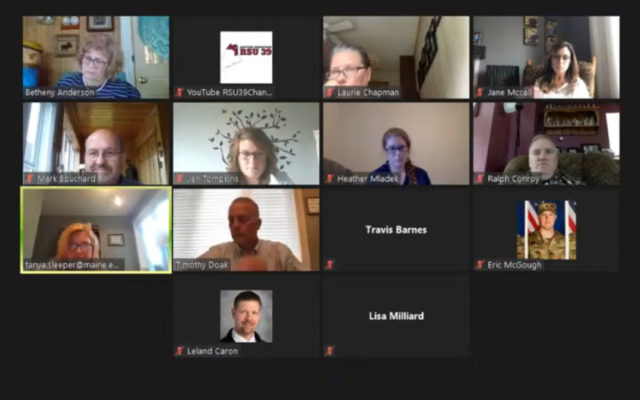 CARIBOU, Maine — Eastern Aroostook RSU 39, a school district consisting of Caribou and Stockholm, will hold its district budget meeting at 6 p.m. on June 23 at the Caribou Performing Arts Center.

RSU 39 Superintendent Tim Doak said the upcoming meeting will adhere to social distancing guidelines, with only 50 allowed in the performing arts center and any additional guests being moved to the cafeteria.

The board also approved the warrant and notice of election for the RSU 39 budget validation referendum, which will allow voters to authorize final budget approval during local elections in both Caribou and Stockholm.

The board unanimously passed its 2020 budget on June 3.

Doak said the administration worked tirelessly to cut close to $2 million in this year’s budget, which totals at $19,8014,702.56 and will not result in any mill rate increase for the district’s communities. The superintendent said this was part of RSU 39’s effort to not burden residents who are struggling financially due to the COVID-19 pandemic.

RSU 39 Business Manager Mark Bouchard on June 10 offered a clarification about one of the cost-saving measures mentioned during the board’s previous meeting, in which $100,000 collected by The Friends of Caribou Schools would be used to offset debt service for a second gymnasium and additional music program space at the upcoming Caribou Community School.

Roughly 95 percent of the new school project is funded by the Maine Department of Education, but RSU 39 area residents also voted to pay for the additional gym and music room space. The Friends of Caribou Schools was formed shortly after this vote, and is dedicated to raising at least $1 million of the approximately $2.5 million needed for these locally funded additions.

“I stated that these funds were being used to offset taxes,” said Bouchard, “which, in essence, they are, however my comment was very misleading because I received comments from community members who were unclear as to what I was saying.”

Bouchard said locally funded allocations for the additional portions of the new school are in a separate account from the rest of the regular school budget, and that all donations collected by the organization are going directly toward the new school.

He said some residents were concerned that the money would be used to offset the regular budget such as paying for a new school bus or to fund a new teaching position, and clarified that this is not true.

“I want to make it clear that this has nothing to do with the regular budget — it’s not being used to offset the budget,” he said. “It’s a separate pool of money that we have to request to make our loan payments for the additional gym and larger music program space, and the donation is helping to offset that amount.

Instead of requesting $197,000 from local residents to pay for debt service related to the additional gym and music room space, this year that number will be brought down to $97,000.

RSU 39 Board of Education Chair Tanya Sleeper reiterated that the money raised by The Friends Of Caribou Schools will be used for the exact purpose intended by the organization.

She said that if any residents have additional questions about this, they are welcome to reach out to school officials for further clarification.

Bouchard said on June 11 that he was thankful for the calls from concerned residents, adding that it is important for the community to have the correct information about the school budget.

Caribou and Stockholm residents will vote on the budget validation referendum — the final step of the budget approval process — during the July 14 election.

Just when we thought we were out of the woods with kitten season, it has hit full force.  The past few days have been difficult answering the phone and hearing the stories of why people have litters of kittens they need to surrender.
Campaign Corner END_OF_DOCUMENT_TOKEN_TO_BE_REPLACED