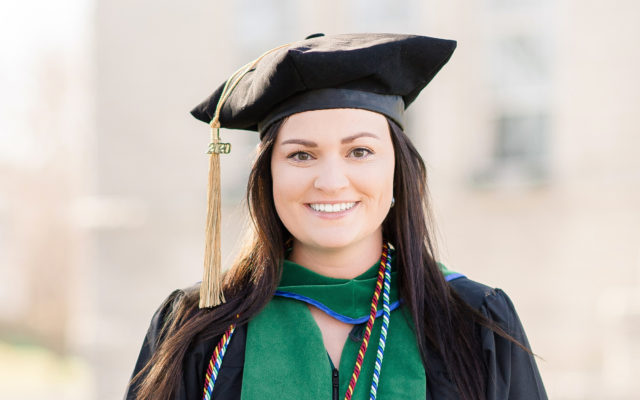 Joseph Cyr • June 30, 2020
From the time she was a little girl, Houlton native Katie Cone dreamt of becoming a doctor to help the sick. Now that dream has become a reality.

HOULTON, Maine — From the time she was a little girl, Houlton native Katie Cone dreamt of becoming a doctor to help the sick.

Now that dream has become a reality.

In May, the daughter of Milton and Susan Cone of Houlton graduated from the University of New England College of Osteopathic Medicine.

“I decided to pursue a career in medicine after a close friend, Logan Dewitt, passed away unexpectedly when I was 9 years old,” Cone said. “From that point forward, I knew I wanted to become a doctor.”

Cone spent many hours during high school shadowing Dr. Rosalinda Maraya at Houlton Pediatrics and volunteering within their department. At that time, Cone said she was convinced she would become a pediatrician.

Upon graduating from Houlton High School in 2011, she attended the University of New England for her undergraduate program. While there, Cone earned two bachelor’s degrees — one in medical biology and one in neuroscience. She graduated in 2015 and while doing her undergraduate studies, Cone worked full time in a research laboratory studying addiction medicine and addictive behaviors

She took a year off from school between her undergraduate program and medical school to finalize some research projects and publish her fifth peer-reviewed journal article. Cone then began medical school in 2016 at the University of New England College of Osteopathic Medicine in Biddeford.

“I also trained at the Hazelden Betty Ford Center in Rancho Mirage, California, where I was able to work alongside and learn from those in recovery and top experts in the field of addiction medicine,” she said. “It was a life-changing, empowering and incredibly moving experience that I will never forget. Addiction isn’t a focus in many medical schools’ curriculums, so doctors just aren’t equipped to handle the biological, physiological, psychological, and social aspects of the disease unfortunately. With the opioid crisis in full swing, along with other substance use issues, I hope to be one of many providers that strives to help those struggling with their addiction.”

In May, Cone received her diploma, not in a graduation ceremony with her school, but in the backyard of her parents’ home.

Her family, knowing how important this day was to her, set up a “drive-in movie” type experience where family members could drive up and watch her virtual graduation projected on a screen from their cars, while Cone stood before them in her regalia receiving her diploma and reciting the osteopathic oath.

“Although I always thought pediatrics would become my specialty, I developed passions for addiction medicine, women’s health and small surgical procedures along the way as well,” she said. “Therefore, I decided to pursue family medicine as my specialty so I could incorporate all of those into my practice. I’m currently training in a family medicine residency program at Tallahassee Memorial Healthcare in Tallahassee, Florida, where I will be for the next three years.”

“We’re happy to be back together and enjoying the Florida sunshine, but we also look forward to the day when we return to Aroostook County,” she said.

We include them in our family portraits, make room for them on our beds, tell them our deepest secrets and miss work when they’re sick. And whether they paw, fly or swim their way into our hearts, pets are an important part of our lives.
Campaign Corner END_OF_DOCUMENT_TOKEN_TO_BE_REPLACED