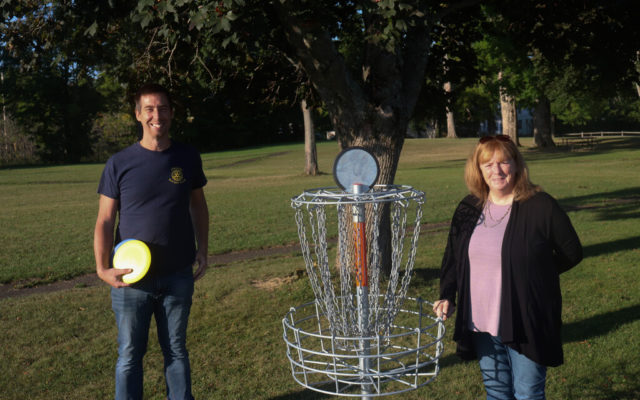 Alexander MacDougall • September 4, 2020
After a summer season which saw a dearth of sports canceled due to the ongoing COVID-19 pandemic, Houlton residents can take solace in a new, socially-distanced sport now available at Houlton Community Park -- disc golf.

HOULTON, Maine — After a summer season which saw a dearth of sports, canceled due to the ongoing COVID-19 pandemic, Houlton residents can take solace in a new, socially-distanced sport now available at Houlton Community Park — disc golf.

A sport that follows the rules of golf but involves throwing flying discs into metal baskets, the idea for a disc golf course in Houlton came from Nate Bodenstab, a member of the Houlton Rotary Club.

“It’s been getting really popular,” said Bodenstab of the sport. “In Maine, I think there’s about 70 courses now that have sprung up in the last 10 years or so. It works great with the area here at Community Park, [where] they already maintain it.”

Initially, Bodenstab had considered putting the course near Houlton’s Riverfront Park, land which is owned by the Putnam Charitable Trust. But he quickly realized that installing it in that area would be far too costly because of the vast number of trees.

“There’s one area where it’s forested by the river, which would have been beautiful, but also a lot of work,” he said.

Instead, Bodenstab reached out to Marie Carmichael, recreation program director at the Houlton Parks and Recreation Department, to place it in Community Park, which is owned by the town itself. The installation of the baskets was done in July by Chris Stewart of the Public Works Department.

“We thought it was a great idea,” said Carmichael of the proposal. “He [Bodenstab] developed the course, and then would meet with me and we would go up to take a walk through community park to kind of hash through what would work and what wouldn’t.”

It isn’t the first disc golf course to appear in southern Aroostook. Maple Ridge Disc Golf exists in nearby Westfield, and the Shady Ridge Disc Golf Course is planning to open in Littleton. But unlike those two courses, which charge a fee, the Houlton course is free to play and is only nine holes instead of the ordinary 18, making it ideal for beginners of the sport and casual players.

Though the course has yet to be fully completed, with some signs and maps of the course still needing to be put in, visitors have already started to gather to play disc golf.

“There are quite a few people that are using it,” said Carmichael of the new course. “It should be fun for the community to be able to play.”

“It’s perfect for social distancing,” said Bodenstab. “You can come out here with your friends and family and stay outside and play.”