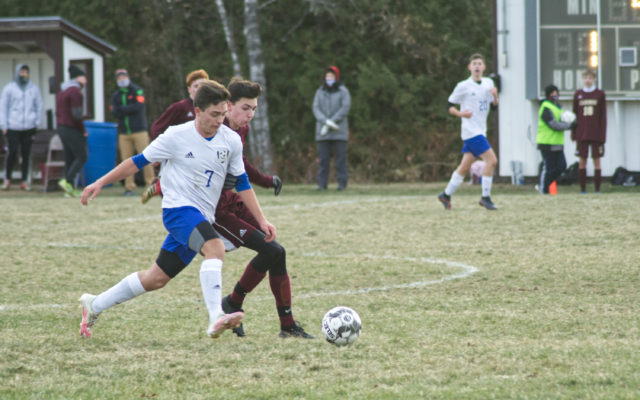 Chris Bouchard • October 30, 2020
Madawaska will move on to the Aroostook League Division 1 championship after netting a 2-1 overtime victory against Caribou Oct. 30.

CARIBOU, Maine — Madawaska will move on to the Aroostook League Division 1 boys soccer championship after netting a 2-1 overtime victory against Caribou Oct. 30.

In Friday night’s game at Caribou High School, both teams maintained tight defenses throughout, with Devin Wright, assisted by Ethan Holdsworth, scored for Caribou and Robert Lausier scored for Madawaska by halftime. That 1-1 score remained at the end of regulation, sending the game to overtime. In the extra period, Madawaska’s Brady Gagnon scored the winning goal  with just four minutes and 32 seconds left on the clock.

The names of the players who scored the first goals for both Caribou and Madawaska were not immediately available.

Madawaska Coach Ben Gagnon said it was a hard fought game that could have gone either way.

“We don’t normally play a team like Caribou,” he said. “They’re Class B and we’re Class D, so we didn’t see them in the regular season.”

He said he felt the team’s season this year went well overall.

“We had some good games and some tough games, but all in all we persevered and made the best of what we could,” said Gagnon.

Caribou Coach Andre Rossignol said it was a good game, and that Madawaska had a really good game plan coming in.

“They obviously put a lot of pressure on Ethan Holdsworth and Justin Pelletier did a really good job of being a persistent, tough defender all night,” Rossignol said. “They had some good counter attack opportunities and capitalized on them. I think Madawaska has a lot of speed in all areas of the field and, in soccer, speed is an important attribute. They played really hard, and they were good team mates and positive towards each other.”

He added this year’s season was not without its trials and tribulations, especially with two players needing to undergo surgery because of collisions with goalies within a three-game span.

“It was definitely a weird season,” he said. “I’ve been watching high school sports all my life, and I’ve never seen injuries like that happen in a three game span, but we had some big wins. Soccer is a weird sport where anything could happen, and tonight things just didn’t go our way.”