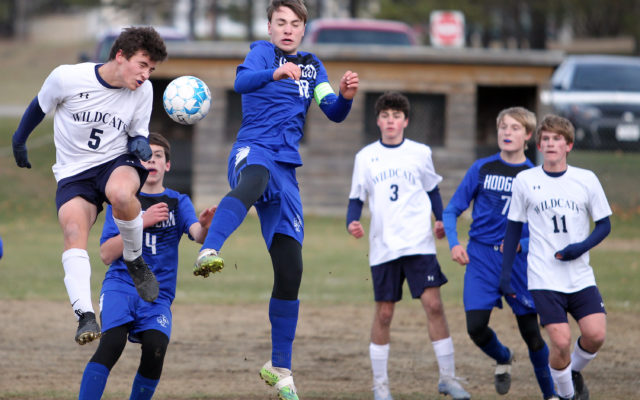 Such was the case Friday evening as the No. 4 Presque Isle boys soccer team upset top-ranked and previously unbeaten Hodgdon 3-0 in a boys Division 1 soccer semifinal.

With the victory, the Wildcats (7-2 overall) advance to the Aroostook County Division I championship, set for Thursday, Nov. 5. Presque Isle faces the winner of Friday’s other semifinal game between No. 2 Caribou and No. 3 Madawaska. The game will be played at the highest remaining seed. Hodgdon (8-1) will face the loser of that game to determine who finishes third.

In Friday’s semifinal, played under chilly and windy weather conditions at Hodgdon Middle-High School, the Wildcats used a precision ground-passing attack to their advantage as the visitors controlled play for much of the game.

Presque Isle’s Jonah Roy scored two goals, including a penalty kick in the second half to lead the Wildcats. Quinn Demerchant added a goal and an assist for the winners. Elijah Matheson had seven saves on 11 shots for Hodgdon, while Xavier McAtee had two saves on five shots for the Wildcats.

Both Presque Isle coach Tim McCue and Hodgdon coach Jason Little noted Friday’s game marked the first time in many years that the two squads met on the soccer field. The Wildcats traditionally play a Class B schedule, while the Hawks competed  in Class D.

“Hodgdon showed us they have some speed and talent,” Presque Isle coach Tim McCue said. “They are very well-coached and do good things on the field.”

“We normally would play Presque Isle’s junior varsity squad in the preseason just to get some experience on their artificial turf surface and to see some teams we wouldn’t normally see,” Little said. “We knew Presque Isle was going to be a formidable opponent. They are a very strong squad that moves the ball extremely well.”

McCue said the key to his squad’s victory was the Wildcats ability to place the ball where they wanted, even though they were playing on an unfamiliar and smaller field than they are accustomed to.

“Because we play a lot on the (artificial) turf, we have learned that if we keep the ball on the ground it gives us a big advantage,” McCue said. “I think the smaller field got in our heads a little bit in the first half, but we settled down in the second.”

The third goal of the game came on a penalty kick in the second half. 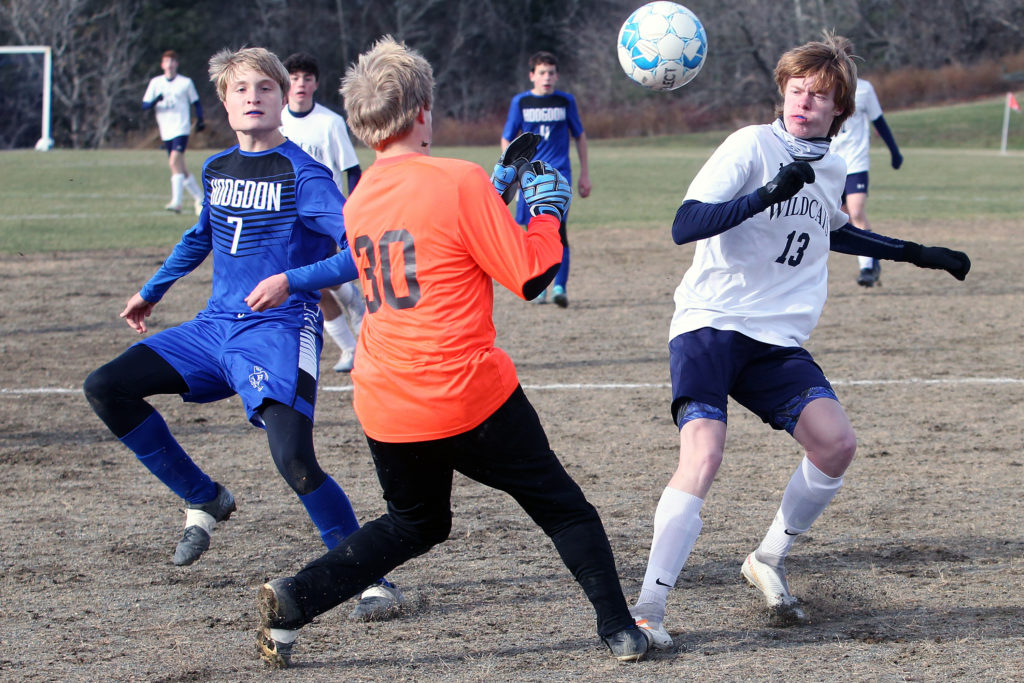 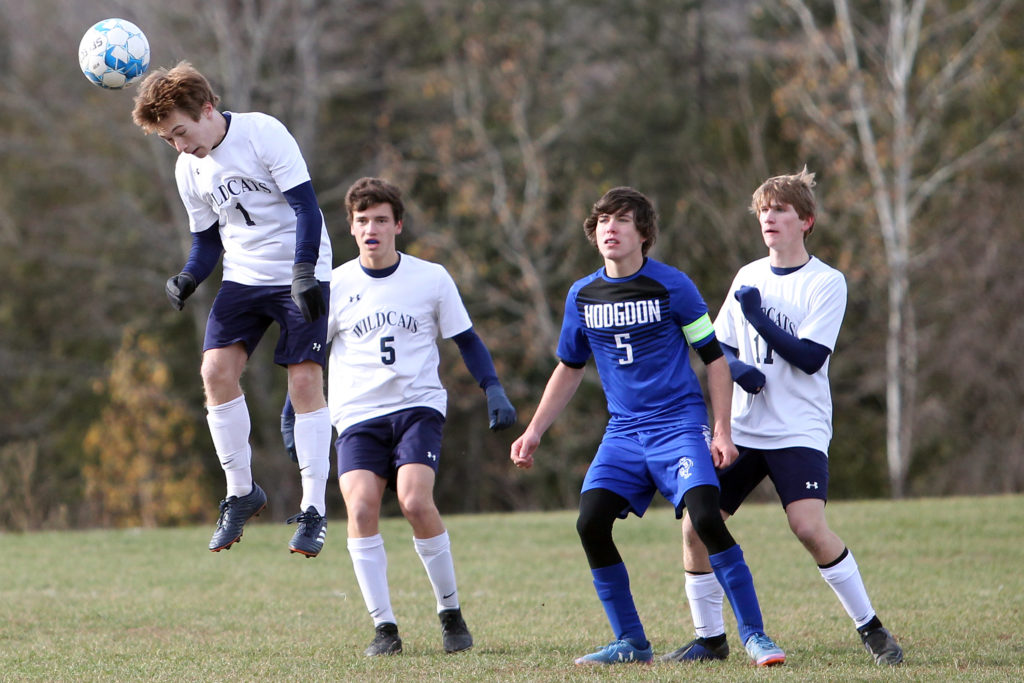 Soaring into the air to head the ball is Presque Isle’s Gavin Tawfell, left, during a Friday boys soccer semifinal against Hodgdon. Backing up the play are Presque Isle’s Quinn DeMerchant (5) and Jonah Roy (11) along with Hodgdon’s Josh McGillicuddy. Presque Isle won 3-0. (Joseph Cyr|Houlton Pioneer Times) 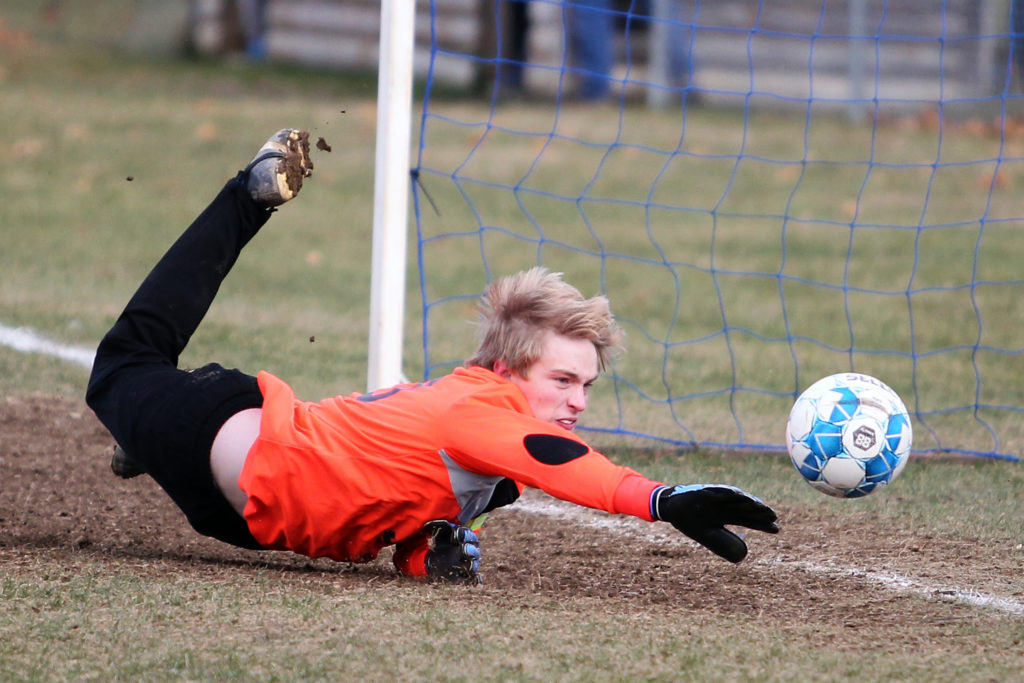