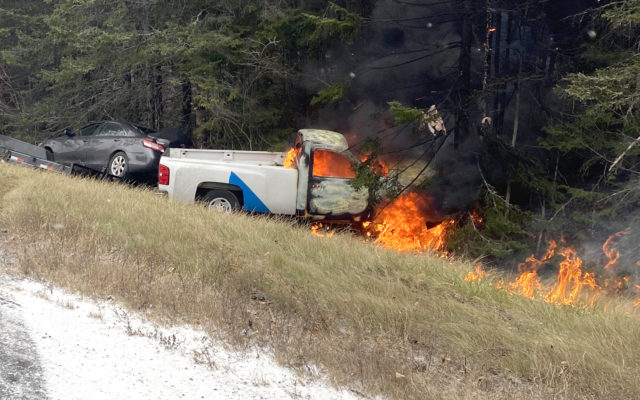 Daniel Guarino, 33, of New Hampshire was driving south on I-95 when his vehicle, identified only as a Chevy pickup truck, skidded off the roads due to icy conditions resulting from a snow squall, according to the Maine State Police.

The pickup had also been towing another vehicle on a trailer, which had also crashed and received damage as part of the accident. The truck caught fire shortly after the accident, police said. Troopers Hunter Cotton and Kyle Rider were unable to identify the year or model of the Chevy.

Troopers arrived to find the pickup engulfed in flames as a result of the accident.

Guarino was able to escape his truck before it caught fire, and was treated at the scene for minor injuries, police said. He was wearing his seatbelt and speed was cited as a factor in the crash.

The accident did not require a shutdown of the interstate.