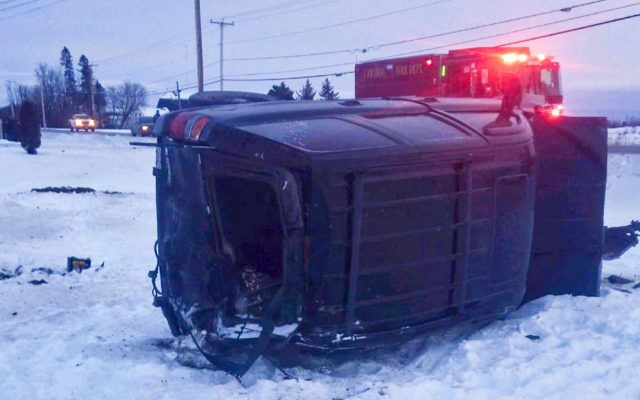 Chris Bouchard • January 13, 2021
A woman and two minor children were transported to Cary Medical Center in Caribou with non-life threatening injuries following a single-vehicle crash on the New Sweden Road in Caribou.

CARIBOU, Maine — A woman and two minor children were transported to Cary Medical Center in Caribou with non-life threatening injuries following a single-vehicle crash on the New Sweden Road in Caribou, according to a press release from Caribou Police Chief Michael Gahagan.

The rollover crash occurred on Monday, Jan. 11 in the early afternoon, and police said their investigation found that a 2002 Chevy Tahoe driven by Kristin McBreairty, 27, of Caribou left the road in an area near the Caribou Country Club, traveled in the ditch some distance and then struck a driveway culvert.

The vehicle became airborne and traveled several feet before striking the ground, the report states. The vehicle rolled twice before coming to rest on its side.

Officers Craig Peterson, Kyle Scott, and Kevin St. Peter responded and were assisted by the Caribou Fire and Ambulance Department.

Speed and possible distractions are currently considered as contributing factors, according to the report. Police said on Wednesday that McBreairty received a summons for operating after suspension, a citation for no insurance, and two seat belt violations. Police declined to comment specifically on which occupants were not wearing their seat belts.

The crash remains under investigation.