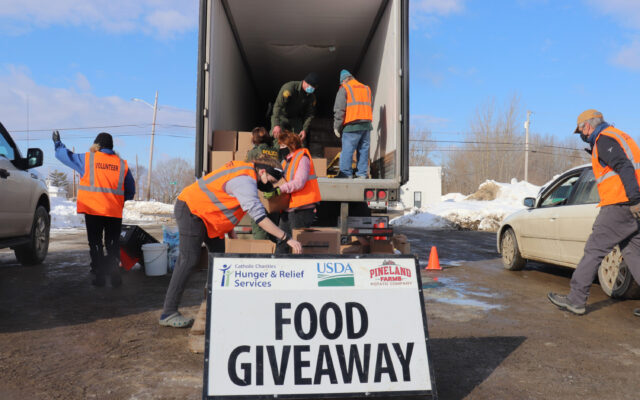 Hundreds turn out for Catholic Charities food giveaway in Houlton

Alexander MacDougall • February 25, 2021
Cars were backed up onto Military Street in Houlton on the morning of Wednesday, Feb. 24, causing traffic jams as people sought the perishable food items being given out at St. Mary’s Catholic Church.

HOULTON, Maine — Cars were backed up onto Military Street in Houlton on the morning of Wednesday, Feb. 24, causing traffic jams as people sought the perishable food items being given out at St. Mary’s Catholic Church.

The food is being given out by the United States Department of Agriculture’s Farmers to Families Program, which provides food assistance to those affected by the COVID-19 pandemic.

“The need is great, and the need is real,” said Dixie Shaw, the director of hunger and relief services at Catholic Charities Maine, as she helped direct the massive flow of cars across the church’s parking lot. “If you don’t believe me, look around here today and you’ll see what I’m talking about.”

Delivered by truck, each load consists of 1,000 boxes containing 30 pounds of perishable food items such as vegetables, fruit and meat. A gallon of milk is also provided for every food box. Volunteers from Catholic Charities, as well as officers from the U.S. Border Patrol, helped unload the boxes from the truck and into the cars of those who had arrived.

The food distribution is one of several that have been conducted throughout northern Maine since the start of the pandemic almost a year ago. The economic toll the pandemic has had on many, as well as the lack of any formal requirements to be eligible for the food boxes, contributes to the consistently huge turnouts at the food giveaway events.

“People have struggled through COVID, and oftentimes they don’t qualify for things because it’s temporary problems,” Shaw said. “So this has been able to help.”

Catholic Charities will head to Madawaska next week, followed by Presque Isle and Caribou in the following weeks to help deliver food to other parts of Aroostook County. Northern Penobscot towns, such as Lincoln and Millinocket, as well as areas in Washington County have also been aided by Catholic Charities in the delivering of food from the USDA program.