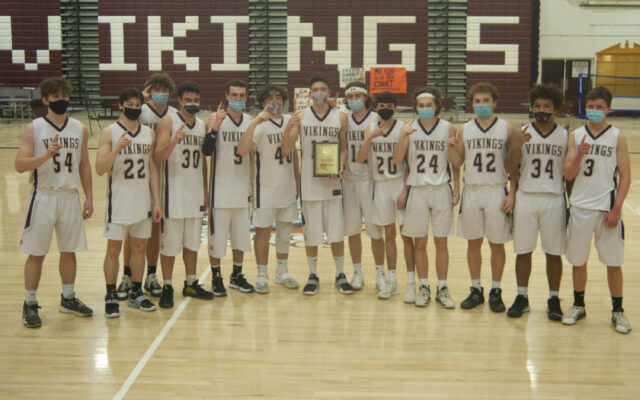 Chris Bouchard • March 12, 2021
The Caribou Viking boys capped off a perfect, albeit unconventional, season Thursday with a 72-45 victory over Southern Aroostook for the Aroostook League Boys championship.

CARIBOU, Maine — The Caribou Viking boys capped off a perfect, albeit unconventional, season Thursday with a 72-45 victory over Southern Aroostook for the Aroostook League Boys championship.

The Vikings posted an impressive 16-0 season for coach Kyle Corrigan. Earlier in the week, the Vikings won the Division 1 title with a win over Central Aroostook.

And though for the past two years the Vikings won the state Class B championship and returned to Caribou with the gold ball, the March 11 game is as far as they will be able to go this year as there was no statewide postseason.

Thursday’s game was somewhat close to start, with the Vikings only having a seven point lead by the end of the first quarter (23-16). By halftime though, the margin increased to 16 points (38-22) and the team continued to increase its lead throughout the third quarter (53-29).

Top scorers for Southern Aroostook were Dylan Burpee with 12 points, and Graham Siltz and Hunter Burpee with eight points each.

Southern Aroostook Coach Brett Russell said their season has been tremendous, and that they’re proud to have reached the point of becoming Division 2 champions.

“Just having the opportunity to come up here and play these guys is great,” Russell said. “They’re a tough bunch. They’ve got a good team over there and it’s all a good learning experience going forward, so I’m definitely not upset. The kids gave an honest effort the whole year, and they never quit, so I’m happy.”

He said the season has been tough, with COVID-19 restrictions not allowing crowds and requiring players to wear masks during games, but that the team has done a great job throughout the year.

“We got to play a lot of good Class B teams, and we got a lot out of that,” Russell said. “Just on the intensity part of it and what you’ve got to come to the gym with every night in order to be successful, so it’s been a great year. Congratulations to Caribou.”

Coach Corrigan commended his team on completing a season with no losses, and said he was proud of their efforts throughout the year.

“Winning isn’t easy,” he said. “It doesn’t matter where you play or when you play, you still gotta show up every single day.”

He said he’s especially proud of the team for improving their defensive talents.

“I said at the beginning of the year that I wanted to see these guys play defense better than we did last year, and they exceeded my expectations on that side of the floor,” Corrigan said.

Much of the team’s success, Corrigan said, could be attributed to their dedication to keep playing despite the COVID restrictions and their intensity during each practice.

“Every practice felt like a game,” he said. “We try to make practices competitive, but we try to make them as fun as possible too so there’s a balance. I hope the guys enjoyed it this year; it wasn’t a normal year by any means with the masks and everything, but overall I’m just really proud of these guys.”

One thing Corrigan said he misses the most about regular seasons is having the opportunity to travel to the Bangor area with the team.

“I miss the travel, not a lot of people would think that’s what we’d say based on this year, but it’s a good bonding opportunity for us,” he said. “Fingers crossed, we can do that again next year because that’s how team comradery is built. Hopefully we can get back to a sense of normalcy next year for everybody.” 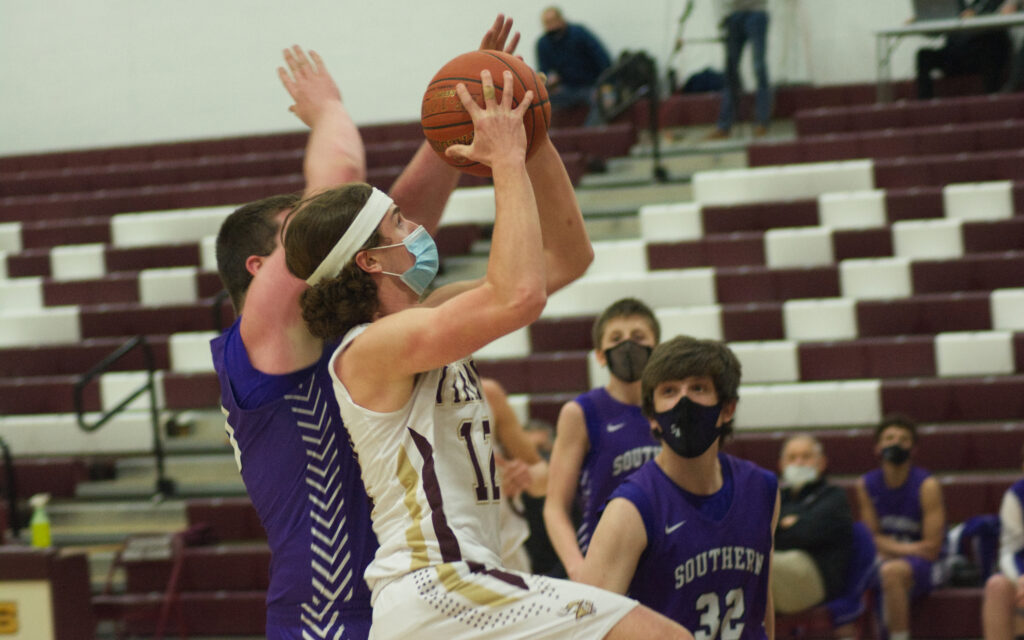 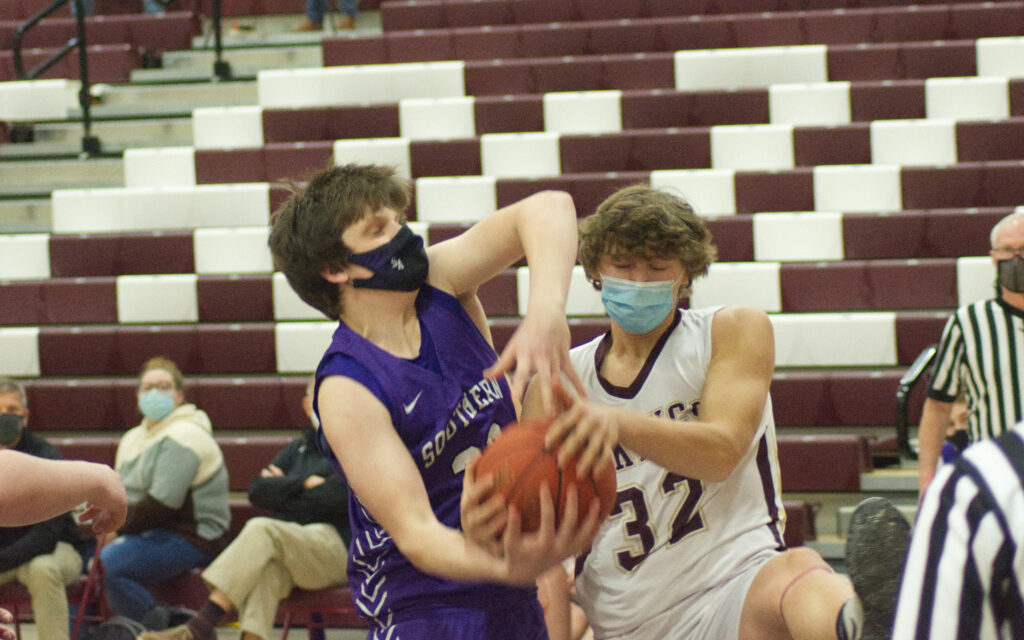 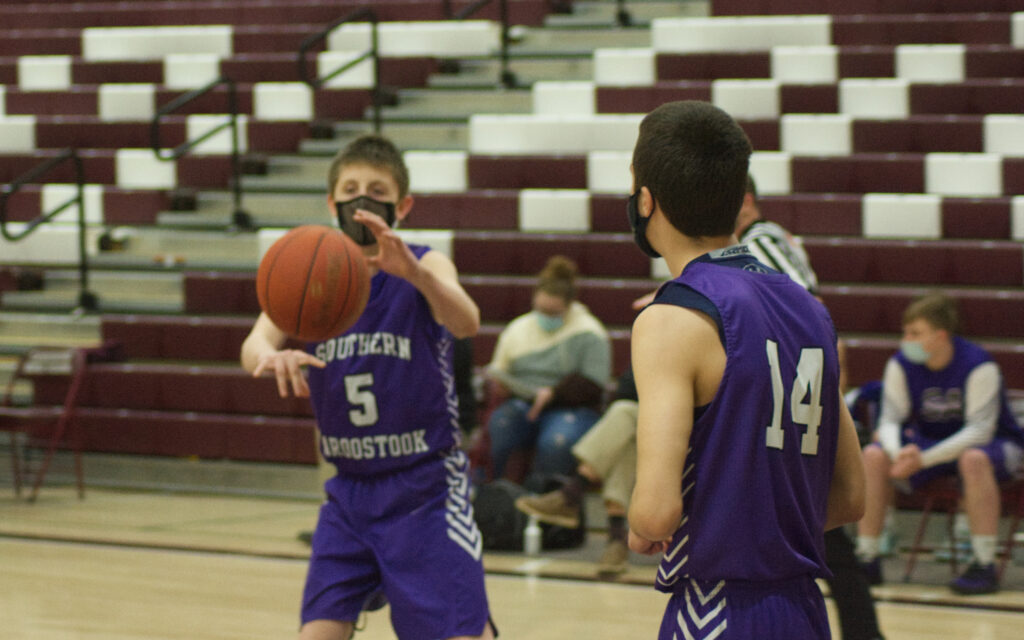 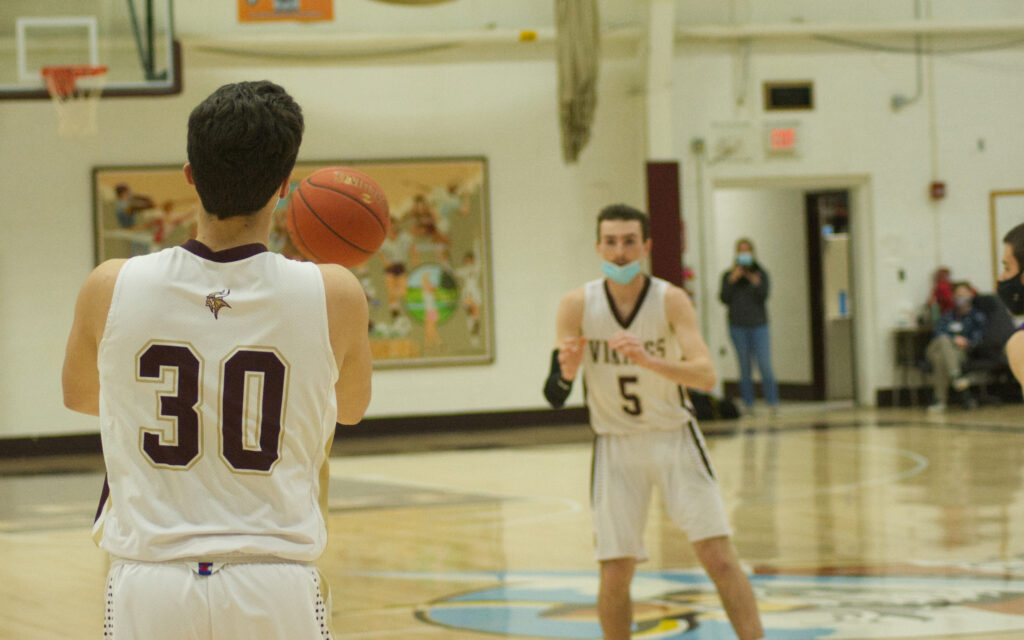 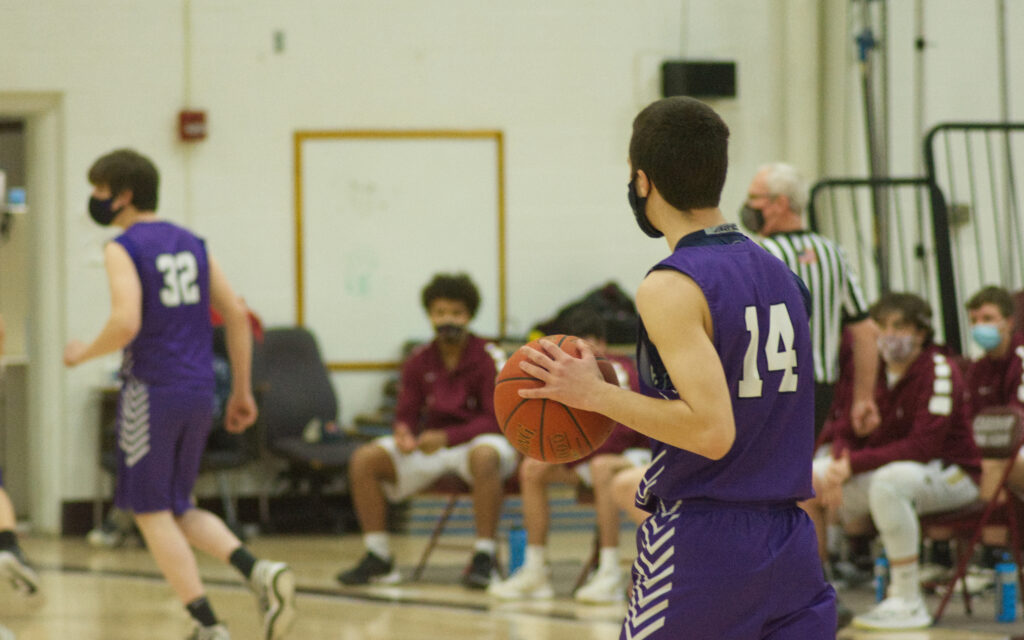 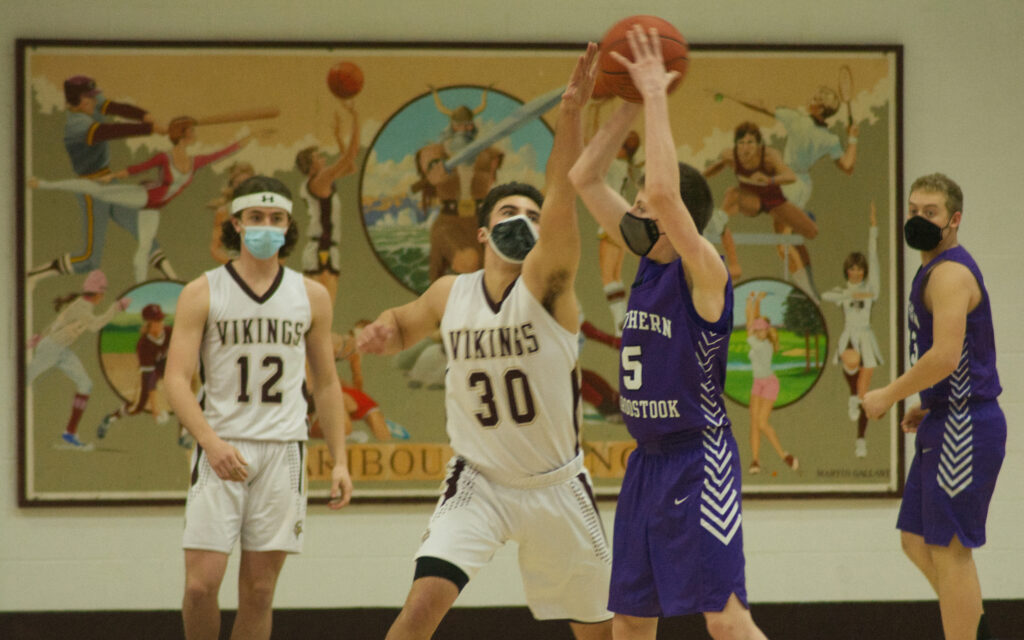 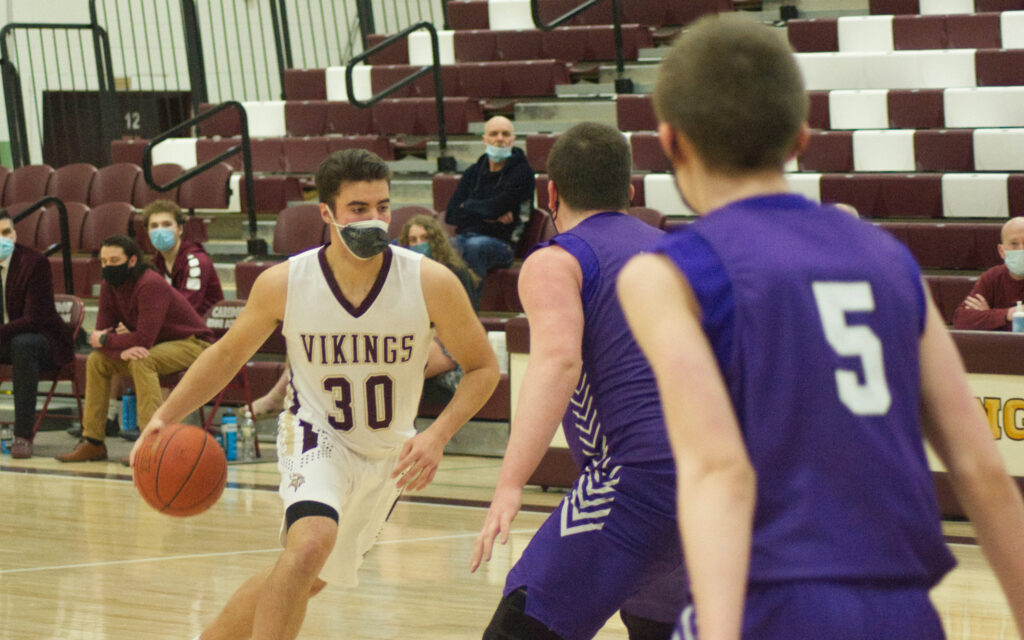 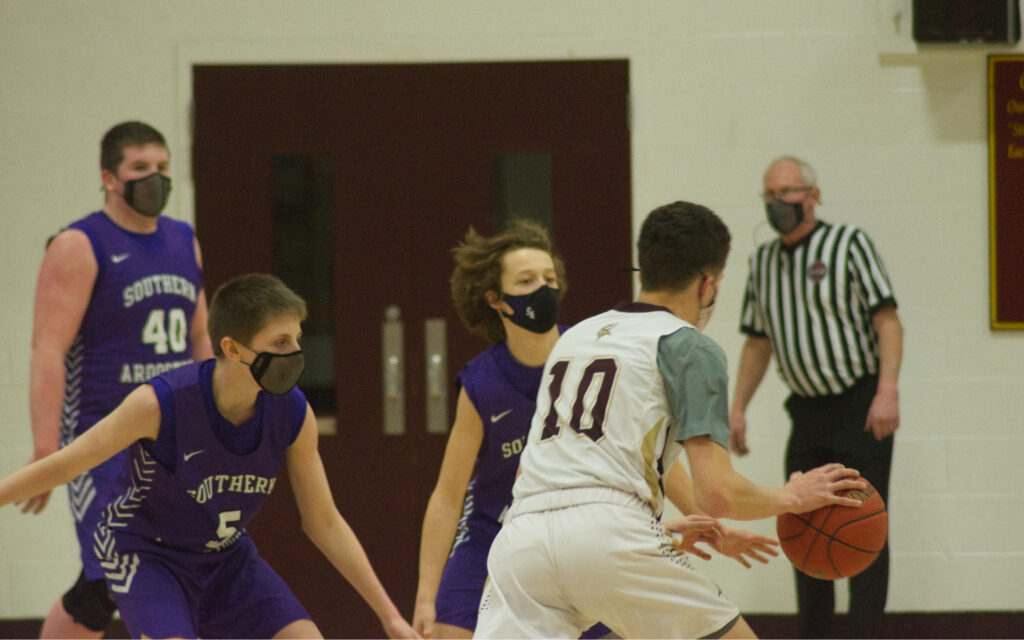 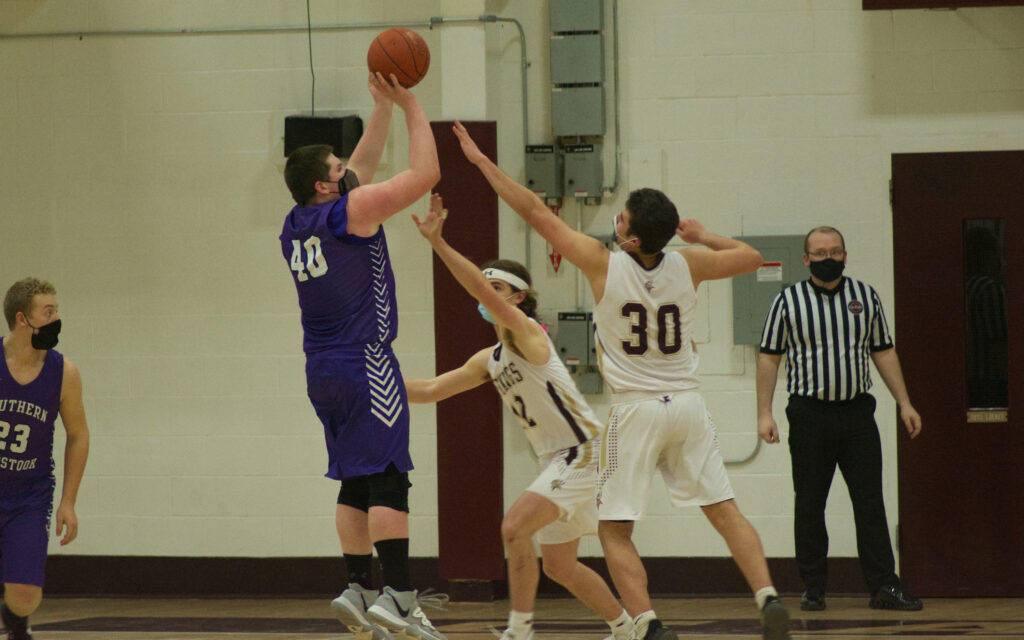 Hunter Burpee of Southern Aroostook takes a shot as the Caribou Vikings attempt to block him during a March 11 championship game. (Chris Bouchard | Aroostook Republican & News)