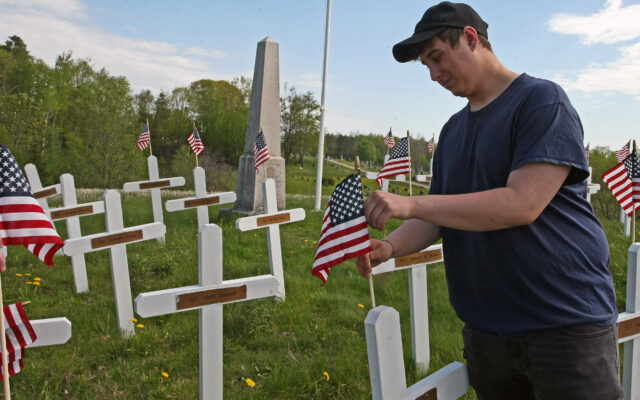 BDN Staff Writers • May 27, 2021
With COVID-19 restrictions slowly being lifted, a number of communities will hold Memorial Day ceremonies after most such services a year ago were cancelled.

AROOSTOOK COUNTY, Maine — With COVID-19 restrictions slowly being lifted, a number of communities will hold Memorial Day ceremonies after most such services a year ago were cancelled.

The following is a list of known Memorial Day events taking place in Aroostook County.

The Chester L. Briggs American Legion Post No. 47 will hold its traditional Memorial Day ceremony with a raising of the flag, prayer and moment of silence at 9 a.m. at Soldier’s Hill at the St. Mary’s Church cemetery located on Smyrna Street.

At 10:30 a.m., a brief ceremony will be held at the Meduxnekeag River Bridge on North Street. Participants will then continue through Market Square to Monument Park, where at 11 a.m., veterans will gather for a ceremony.

The American Legion Post No. 52 will host a short ceremony at the Oakfield Cemetery at 9 a.m. A short prayer and gun salute will be held. At 10 a.m., at the Four Corners Veterans Monument, a ceremony will take place with guest speakers.

Commander Jim Burton will open the ceremony to anyone from the public who would like to speak. A laying of wreaths will be held, along with playing of “Taps,” a gun salute and closing prayer.

There will be no parade this year, due to COVID-19.

The city of Caribou will host a parade in collaboration with the Lister-Knowlton VFW Post 9319 and the Henry B. Pratt Jr. Post 15 American Legion. Lineup begins at 9:15 a.m. at the Caribou Courthouse on Sweden Street and the Parade will begin at 10 a.m. and go from the courthouse up to Veterans Memorial Park on Main Street, next to the Nylander Museum, where a ceremony will be held.

At 1 p.m., veterans will convene for a ceremony at the Northern Maine Veterans Cemetery on 37 Lombard Road. State VFW Adjutant Andre Dumas will serve as master of ceremonies and TAMC CEO Gregory LaFrancois will be keynote speaker. Taps will be played by Fred Ormezzani, and the public is invited to attend.

The Disabled American Veterans Smart RIcker Chapter 10 will hold a Memorial Day ceremony at 9 a.m. at Fairmount Cemetery, followed by a parade at 10:00. The parade line-up will begin at the University of Maine at Presque Isle and proceed to the Gold Star Memorial Bridge on Park Street. On the bridge, the DAV, American Legion Post 88 and VFW members will release wreaths into the river in honor of Navy service members lost at sea. The parade will end at Veterans Park on Main Street, where a ceremonial wreath laying, prayer and playing of Taps will be held.

Any community member wishing to take part in the parade line-up should arrive at UMPI no later than 10:00, according to Smart Ricker Treasurer Rod Cameron.

Members of the Houlton Band of Maliseets will head to the ballot box in order to determine who will be elected as their new tribal chief.
Pets END_OF_DOCUMENT_TOKEN_TO_BE_REPLACED
5 days ago