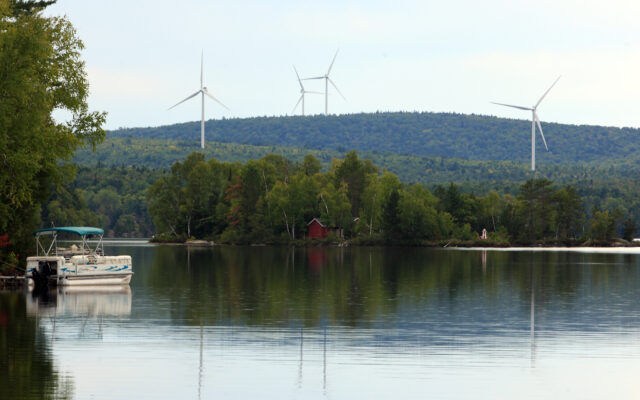 Hannah Catlin • June 23, 2021
Most of northern Maine, including a large portion of Aroostook and part of Washington counties, is an energy island that is dislocated from the rest of the northeastern power grid, ISO New England.

Most of northern Maine, including a large portion of Aroostook and part of Washington counties, is an energy island that is dislocated from the rest of the northeastern power grid, ISO New England.

A bill to connect that island to the New England power grid has passed the state House and Senate, and is awaiting action from Gov. Janet Mills. It would allow the region to export renewable energy to the rest of the northeast, which legislators and advocates hope will bolster economic development in one of the state’s most rural areas. It also solicits bids on new renewable power plants in northern Maine — a potential source of new jobs and tax revenues.

Should the governor sign LD 1710 into law, the Maine Public Utilities Commission has until November to put out a call for bids to build the transmission lines between the New England grid and northern Maine. The path and length for this line does not exist yet — the bill is a first step in a years-long development process and the PUC has until March 2022 to choose between proposals.

“It finally gives Aroostook County an opportunity to play in this rapidly growing renewable energy generation [market],” Paul Towle, president and CEO of economic development organization Aroostook Partnership, said. “With that comes jobs, it’s a tax base, it’s building out land, building assets — it could be a couple billion dollars worth of assets that get built in Aroostook County.”

The connection will offer an alternative to the current system — in which energy generated in northern Maine has to be wheeled back into New Brunswick, through NB Power, before it can travel through power lines to the United States.

Sending energy back to Canada is not cost-effective and has discouraged previous efforts to bring commercial renewables to northern Maine, State Sen. Trey Stewart, R-Aroostook, the ranking Republican on the Energy, Utility, and Technology Committee, said.

This inefficiency was behind the deterioration of previous renewable energy efforts in the region — in 2018 and 2019, ReEnergy closed its two biomass plants in Aroostook County citing the disconnect from New England as a major source of financial strain on their northern Maine locations.

Brookfield Renewable Partners, the company that owns Mars Hill Wind Farm, declined to comment on whether the energy from the wind farm was being exported to New Brunswick or distributed locally into northern Maine. But Senior Director Andy Davis said the company supported efforts to reduce or eliminate barriers to the sale of renewable energy, so long as they don’t lead to the congestion of the grid.

Neither Onward Energy, the operator of the Oakfield wind farm, nor the developers of either of the prospective wind or solar farms responded to requests for comment on how the move could affect their projects.

Renewable energy projects have received some pushback in The County in the past, with residents displeased with both the imposition of the plants themselves and lower-than expected economic returns for local towns.

But Maine’s transition to renewables has been baked into Gov. Janet Mills’ agenda, from her plans for the state’s economic recovery to her 2019 promise to make Maine carbon neutral by 2045. The growth of Maine’s renewable energy industry is inevitable, Towle said, and building the connection to the New England grid means that northern Maine could get in on the benefits of that transition.

That’s one of the major reasons why Stewart expects this plan will be well-received despite the fact that Maine’s other major power project — the Central Maine Power corridor, aiming to bring hydropower from Quebec into Lewsiton — has been embattled for months. Stewart said this project is a much easier sell with its goal to specifically bring the economic benefits back to northern Maine.

While the connection proposed by LD 1710 would be focused explicitly on exporting power, it also creates the potential for tying northern Maine completely into the rest of the New England grid sometime in the future, Stewart said — a prospect that could bring more competition to the energy market and potentially lower prices.

It’s a bonus Aroostook County Administrator Ryan Pelletier considered as well. He recalled a deal to bring a potato processing plant to The County that failed because the electricity bill would be too high for the company to bear.

“I just hope that the general public realizes how important this kind of legislation is to Aroostook County,” Pelletier said. “This is behind the scenes stuff that really is impactful to the people who live here and for business opportunities.”

For the first time since 2019, there is competition for open seats on the Houlton Town Council
Pets END_OF_DOCUMENT_TOKEN_TO_BE_REPLACED

All of us at the Central Aroostook Humane Society hope that you had a wonderful and safe Thanksgiving holiday.  One change in shelter hours: just for the month of December, we will be closed Thursdays for training purposes.
What's Happening This Week END_OF_DOCUMENT_TOKEN_TO_BE_REPLACED