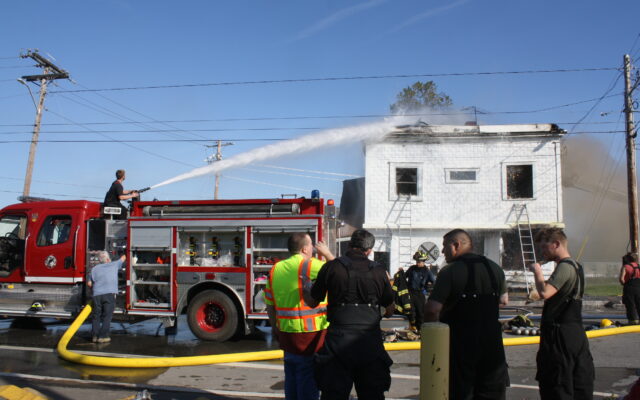 Melissa Lizotte • October 7, 2021
When Mitch Ross, pastor of United Baptist Church in Mars Hill, learned that the home of his friend Neil Donelly was on fire, he immediately went to the scene to offer help.

MARS HILL, Maine — When Mitch Ross, pastor of United Baptist Church in Mars Hill, learned that the home of his friend Neil Donelly was on fire, he immediately went to the scene to offer help.

Ross was one of several churchgoers and dozens of community members who stood across the street from Neil Donelly’s 105 Main Street home and watched firefighters douse the remaining embers.

“We’ve been here since 11:30,” Ross said. “It’s pretty devastating to watch the building go, but this is a town that’s going to stand alongside him.”

The fire was reported at 10:49 a.m. Thursday, according to Mars Hill Fire Chief Gerald Cousins. At around 2 p.m. crews from Mars Hill, Bridgewater, Easton and Presque Isle were still on the scene, training water on what little smoke still filtered out of the early 1900s home. 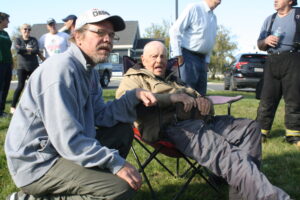 Joseph Donelly (left) sits with his father Neil Donelly Thursday, as fire crews put out the remaining smoke at his home, which was deemed a total loss. (Melissa Lizotte | The Star Herald)

Though the exterior of the home still stood, the home was deemed a total loss due to how quickly the fire spread inside, Cousins said. The Maine State Fire Marshal’s Office is still investigating the exact cause.

Neil Donelly was in Presque Isle at the time of the fire but came back to town as soon as he got the call from neighbors. Throughout the afternoon the 80-year-old lifelong Mars Hill resident sat in a donated lawn chair while his son, Joseph Donelly of Caribou, remained by his side.

The loss of the Donelly home has been devastating for the family, stated Joseph Donelly. He said his father, a former logger for Great Northern Paper Company, would sit on the porch and wave to friends who passed by.

Now a historic piece of the Donelly family and the town of Mars Hill is gone.

“It’s a landmark here in town,” Joseph Donelly said. “I grew up there. My father grew up there and he and my grandfather built it.” 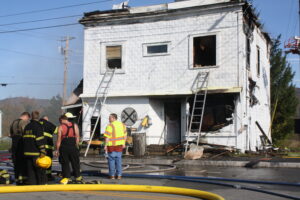 The home of Neil Donelly, a lifelong Mars Hill resident, was deemed a total loss Thursday after a devastating fire. (Melissa Lizotte | The Star Herald)

The Donellys are thankful for the community members who brought food, water and money to Neil throughout the afternoon. Lisa Burtt, owner of the local Bear Paw Inn, offered Neil a room to stay and brought sandwiches and water for him and the firefighters. Aroostook County Action Program, American Legion Post 118 and the Mars Hill and Blaine town offices are helping to collect clothing via social media posts.

It’s only natural, Ross said, that the entire Mars Hill and Blaine communities would band together and help someone who has lost everything.

“[Neil] has been here a long time and I know people are going to have his back,” Ross said. “It’s a blessing to see folks care for a fellow community member.”

Members of the Houlton Band of Maliseets will head to the ballot box in order to determine who will be elected as their new tribal chief.
Pets END_OF_DOCUMENT_TOKEN_TO_BE_REPLACED