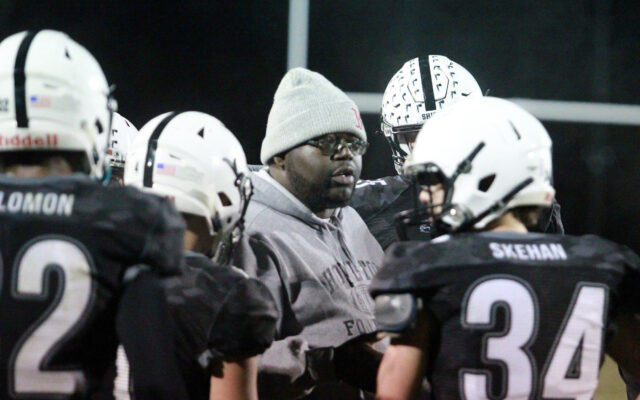 Joseph Cyr • October 30, 2021
A stellar ground performance by Dexter senior Nathan Schobel carried the No. 3 Dexter Tigers to a 60-32 victory over No. 2 Houlton Friday evening in a Small School Eight-Man football northern semifinal.

HOULTON, Maine — A stellar ground performance by Dexter senior Nathan Schobel carried the No. 3 Dexter Tigers to a 60-32 victory over No. 2 Houlton Friday evening in a Small School Eight-Man football northern semifinal.

Schobel rumbled for 307 yards on 17 carries with three touchdowns and five 2-point conversions to lead the Tiger scoring attack.

Dexter (5-2 overall) advances to the Northern championship where the Tigers will take on No. 4 Stearns/Schenck (5-3) who defeated top-ranked Mattanawcook Academy 32-6 in the other Friday night semifinal. 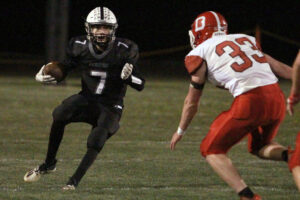 For three-and-a-half quarters, Schobel was nearly unstoppable scoring on runs of 21, 64 and 84 yards. Schobel exited the game with 11 minutes to play in the fourth quarter with a right leg injury and was unable to return.

Dexter rumbled for 406 total yards on the ground with seven rushing touchdowns on the night. Tiger quarterback Bryce Connor completed one of three passing attempts for 29 yards.

“Nathan had a great game, ran the ball really hard and played well defensively,” Dexter coach Andrew Shorey said. “They (Houlton) have a lot of good athletes, so we were worried about that all week. We were focused on playing assignment football and our kids did a great job with that for most of the night.” 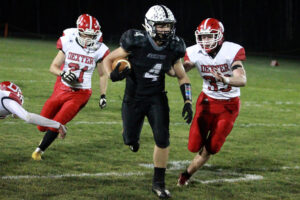 For the Shires, senior Caleb Solomon ran for 138 yards on 16 carries, while senior Chris Caswell had 114 yards on 13 carries. Freshman quarterback Isaiah Ervin completed 10 of 22 passes for 101 yards and a touchdown and added six carries for 79 yards.

Houlton entered Friday night’s game without the services of two starters — seniors Kurtis Reynolds (defensive line) and Troy Hipsley (wide receiver) due to an injury and an illness, respectively. 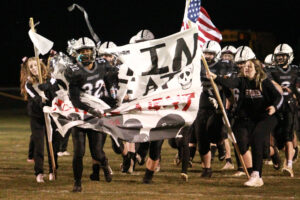 “We had a lot of young kids who got some big time experience, so that is a good thing,” Houlton coach Jon Solomon said. “Dexter played extremely well and I give them all the credit. They jumped on us early, instead of us jumping on them.”

Houlton had four turnovers in the game compared to none for the Tigers.

For the first time since 2019, there is competition for open seats on the Houlton Town Council
Pets END_OF_DOCUMENT_TOKEN_TO_BE_REPLACED