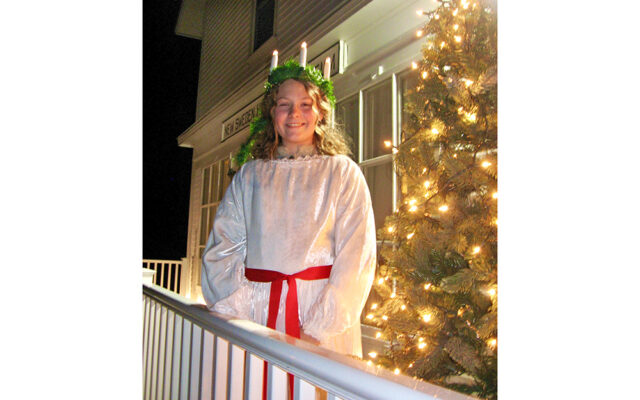 Brenda Jepson, Special to the Aroostook Republican • December 22, 2021
A tradition from old Sweden, going back to the fourth century, was celebrated on Dec. 13 at the New Sweden Historical Society on Saint Lucia Day.

NEW SWEDEN, Maine — A tradition from old Sweden, going back to the fourth century, was celebrated on Dec. 13 at the New Sweden Historical Society on Saint Lucia Day.

Early settlers brought this feast day with them from Sweden when they arrived in the 1870s and it has been observed in the community ever since.

With concerns for COVID-19 still lingering in the community, folks who turned out for the event were asked to observe from their cars and to open their windows both to hear the story of Lucia and to enjoy the music that accompanied her procession.

“I think Avenea very much enjoyed being part of the years of tradition, as well as learning more about Santa Lucia and her work and sacrifice,” said Cassie Germain.

According to legend, Lucia brought food and aid to Christians hiding in the Roman catacombs wearing a candle-lit wreath on her head to light her way and leave her hands free to carry as much food as possible.

Ray Hildebrand told those attending the story of Lucia and of how she made her way to the Swedes, and of her place in tradition and lore as she lit up the dark days.

Cookies made by Norma Akerson were delivered through car windows at the observance, while onlookers enjoyed the procession and the beautiful decorations set up by Debbie Johnson Blanchette, Karen Forsman Wakem, Millie Forsman Forbes and Carolyn Haglund Hildebrand.

“Avenea considered it an honor to represent the love and light Saint Lucia took to the catacombs, “ Cassie Germain said. “And she felt her inspiration to keep our light burning, regardless of the darkness.”

When the shortest days of the year are replaced by the longest, at Midsommar in June, the Swedish community looks forward to celebrating that festival again in 2022 after canceling it for the past two years due to COVID.

“We are so excited to be combining Midsommar next year with our delayed 150th anniversary of New Sweden,” said Brenda Jepson, co-chairwoman of the Midsommar Festival. These two events will be held the weekend of June 17-19.

Forbidden foods for our four-legged friends are many and can be very dangerous if ingested. Sometimes, we give our pets leftovers or what we consider treats. According to many sources, some human foods can make an animal very sick, and in certain cases can even be lethal.
What's Happening This Week END_OF_DOCUMENT_TOKEN_TO_BE_REPLACED