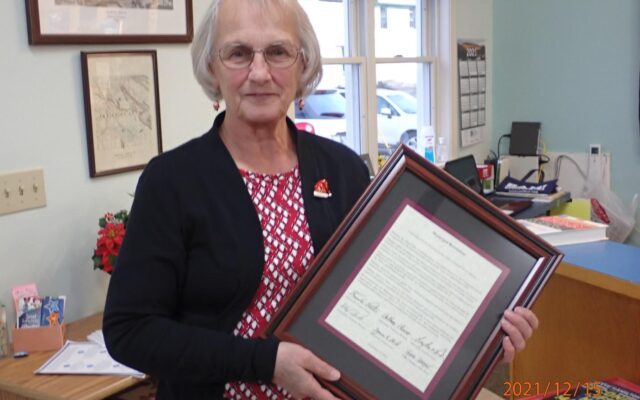 Joseph Cyr • December 25, 2021
There is likely no book contained in the Island Falls Public Library that  is not familiar to long-time librarian Becky Drew.

ISLAND FALLS, Maine — There is likely no book contained in the Island Falls Public Library that  is not familiar to long-time librarian Becky Drew.

After 22 years as the town’s librarian — and de facto town historian — Drew has decided the time was right to step away from the position that has meant so much to her, and the community. She will retire at the end of December.

“I’m 72 and was beginning to feel that I did not have the stamina or energy to put into programming or things that would allow the library to grow,” Drew said. “The computer knowledge necessary now is also a factor. I had said that I would certainly be done by 75, at the same time hoping that someone would come along who fit the job. It is essentially a volunteer position with a small stipend and the time and effort needed needs to be a labor of love rather than an essential career.”

Serving off and on as the librarian since August 1998, Drew was officially selected as the town’s librarian in April 1999.  Prior to that, she had worked in the Island Falls High School library many years ago as a student there, and often substituted at the Katahdin Public Library through the years.

“We are extremely appreciative for Becky’s service to our community and wish her a very happy retirement,” Island Falls Town Manager Jutta Beyer said.

Drew said she had originally planned to work until she turned 75, or whenever the right person came along to take over. It turns out she found just that person a few years sooner than she expected when she was introduced to Alicia McNally.

“Alicia also did some sort of library work through her youth and while her children were at Katahdin High School she worked in that school’s library,” Drew said. “Alicia is from Patten and loves books, people and the job fits her. Being a few generations younger than I am, her ease with the computer is very evident and she is very effective.”

Still letting go of the post that has been a part of her regular routine for so many years was not easy.

The town of Island Falls honored Drew with a resolution acknowledging her long-standing service to the community during a surprise retirement party sponsored by the Board of Trustees.

Over the years, Drew has helped the library stay afloat by obtaining many grants to help with purchases. The library now boasts more than 13,000 books, provides free public Wi-Fi, has computer access and a Children’s Reading Room.

Two of those grants were from the Stephen King Foundation. The first was for a children’s area as the original library building only had a small space for too many books. Thanks to a 2005 grant, the library was able to build a 12-foot by 30-foot addition. Part of that addition houses the town’s history/genealogy room and Drew said she looks forward to continued work there.

Working with children remains some of her fondest memories.

“When I first started, there were good numbers of children using the library,” Drew said. “I always enjoyed them. We did reading programs and contests many times. For several years we did a ‘Farm Day’ with a local farmer bringing baby animals for petting. We usually had a picnic.

“There are not the numbers of children coming now, but there are home school families and getting to know them is exciting as they interact easily,” she said. “Each year I get excited to see my summer patrons return. I enjoy assisting with ‘what to read’ though I’ve learned that suggestions don’t always work.”

The biggest change to the industry was the addition of computers to the library, Drew said. The library started out with just one desktop machine, but now has three, along with two laptops.

“The librarian is no longer just a person who sits at a desk and stamps due dates in your books,” she said. “There needs to be a knowledge of what a computer is capable of, how to use it and how to steer patrons through the unlimited scope of what’s available.”

Drew said she hopes that if she is remembered for anything over the years, it will be her spirit of willingness. That willingness includes being “willing to help or find where help can come from; willing to learn who you are and meet need; willing to talk and listen whether it is about books, the weather or life in general.”

“It’s been a great time for me and I’m excited, but sad to be done,” Drew said. “I will miss the people more than the job, but I’ll be out there whenever I can.”

For the first time since 2019, there is competition for open seats on the Houlton Town Council
Pets END_OF_DOCUMENT_TOKEN_TO_BE_REPLACED

We hope everyone enjoyed a wonderful holiday season and is looking forward to the new year.  December was a busy month at the Central Aroostook Humane Society with so many people and businesses bringing in much-needed supplies and monetary donations, which help us to take care of the special temporary pets in our care.
What's Happening This Week END_OF_DOCUMENT_TOKEN_TO_BE_REPLACED