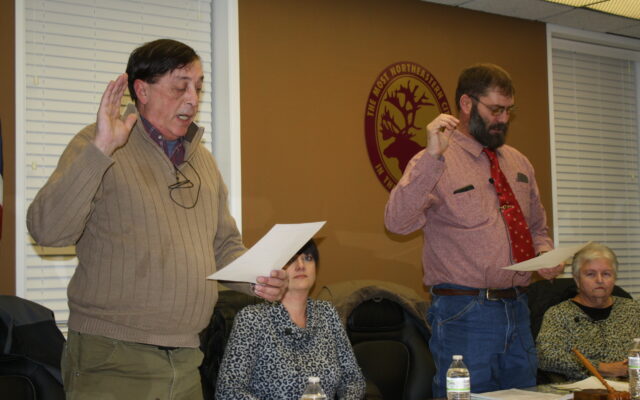 Caribou reelects Smith as mayor, swears in new councilor during first meeting of 2022

Smith thanked Caribou voters for reelecting him and the council for allowing him to serve as mayor.

“Last year was quite the learning experience and I look forward to doing it again,” Smith said.

Morrill also thanked voters for electing him as a first-time councilor. A longtime city volunteer and founder of the Caribou Snowmobile and ATV Clubs, Morrill had previously expressed interest in helping the city redevelop residential properties and invest in future business growth.

“I hope I don’t disappoint you. I probably will, but that’s just how I roll,” Morrill said. “I’m excited about being here.”

The council also certified numerous appointments to city administrative roles and community and advisory boards, including Danielle Brissette as city clerk, registrar of voters and overseer of the general assistance program and Cherie Garman as deputy city clerk.

This year the council changed its regular meeting dates from the first and third Monday of each month to the second and fourth Mondays. The change came about due to councilors’ scheduling conflicts, Smith said.

The next regular council meeting will occur at 6 p.m. Monday, Jan. 10, at the Caribou Municipal Building, located at 25 High St. During that meeting, the council expects to receive the first draft of the proposed 2022 municipal budget.

For the first time since 2019, there is competition for open seats on the Houlton Town Council
Pets END_OF_DOCUMENT_TOKEN_TO_BE_REPLACED

We hope everyone enjoyed a wonderful holiday season and is looking forward to the new year.  December was a busy month at the Central Aroostook Humane Society with so many people and businesses bringing in much-needed supplies and monetary donations, which help us to take care of the special temporary pets in our care.
What's Happening This Week END_OF_DOCUMENT_TOKEN_TO_BE_REPLACED