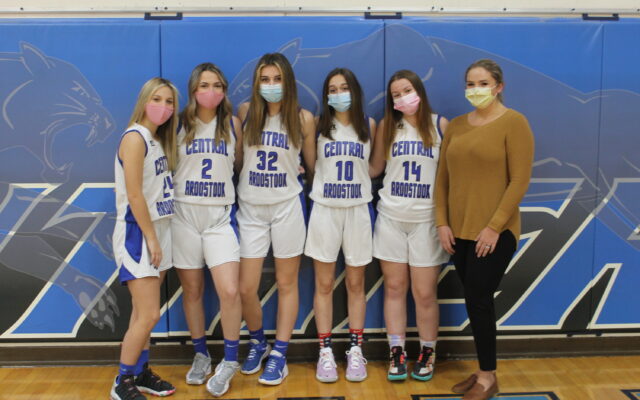 Central Aroostook banks on unity for the season

David DiMinno • January 7, 2022
In the hands of a new head coach, the Central Aroostook Panthers are aiming to create a solid team dynamic, and come together to fill the void left by last year's seniors.

MARS HILL, Maine — In the hands of a new head coach, the Central Aroostook Panthers are aiming to create a solid team dynamic, and come together to fill the void left by last year’s seniors.

The Panthers had a split last season, ending with a record of 7-7, and falling to Houlton in the class B/C semifinal 56-22.

The Panthers have the advantage of being a younger team. There are no seniors this season, but players have already had several years of play with each other. That chemistry will further help the team excel not only this season, but for future seasons to come.

“We hope to bring eighth-graders up this year to help with numbers,” Flewelling said. “We have a very young team, but these girls are very excited to get back into the gym and learn and grow as basketball players.”

Potential starters include Hanes, one of the team’s top defenders. Fitzherbert is also a strong choice. She is a veteran player on the team and a strong leader who has a strong post presence and is very versatile.

Pierce is another starter contender. She is one of the team’s top rebounders, and has a strong inside presence. Pryor is an aggressive defender for the team, and a solid scorer from the outside. Fletcher and Kingsbury are solid role players, and will be stepping up this season after the loss of last year’s seniors.

Maci Beals was lost to graduation last year, as was Libby Grass. Beals was the team’s top scorer and ball handler, and Grass was an outstanding outside shooter with aggressive defense.

“Both key players on the offense and defensive ends,” Flewelling said. “We will be looking for someone to fill their shoes as leaders.”

When it comes to competition, Flewelling cites Fort Fairfield and Hodgdon as top opponents to look out for in the coming season in the Class C North division.

COVID-19 has made practicing at this point in the season very difficult, but the Panthers are trying to make the best out of a less than optimal situation.

“With only being into the season two weeks we already have battled with quarantine and small numbers in practice,” Flewelling explained. “I suspect we will be dealing with this throughout the year. But the students are excited to be able to play and especially to have fans in the stands.”

For the first time since 2019, there is competition for open seats on the Houlton Town Council
Pets END_OF_DOCUMENT_TOKEN_TO_BE_REPLACED

We hope everyone enjoyed a wonderful holiday season and is looking forward to the new year.  December was a busy month at the Central Aroostook Humane Society with so many people and businesses bringing in much-needed supplies and monetary donations, which help us to take care of the special temporary pets in our care.
What's Happening This Week END_OF_DOCUMENT_TOKEN_TO_BE_REPLACED