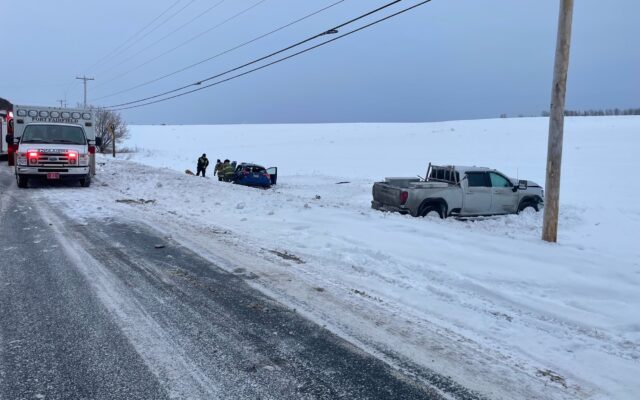 At 8:30 a.m., the Fort Fairfield Public Safety Office received a report of a two-vehicle crash at the intersection of routes 167 and 1A in Fort Fairfield.

Katherine Grant, 43, was approaching the Route 1A intersection in her 2021 Honda SUV. Grant was unable to stop at the stop sign, and went through the intersection. Her vehicle was struck by Dean Staples, 53, of Caribou who was southbound in a 2021 GMC pickup on Route 1A, according to police.

The road conditions were considered icy.

Fire department personnel freed Grant from her vehicle where she was trapped after the crash. She was taken to AR Gould Hospital in Presque Isle, and was treated for minor injuries. Staples was unhurt in the crash. Both drivers were also wearing seat belts, and both vehicles had to be towed away due to damage, police said.

For the first time since 2019, there is competition for open seats on the Houlton Town Council
Pets END_OF_DOCUMENT_TOKEN_TO_BE_REPLACED

We hope everyone enjoyed a wonderful holiday season and is looking forward to the new year.  December was a busy month at the Central Aroostook Humane Society with so many people and businesses bringing in much-needed supplies and monetary donations, which help us to take care of the special temporary pets in our care.
What's Happening This Week END_OF_DOCUMENT_TOKEN_TO_BE_REPLACED