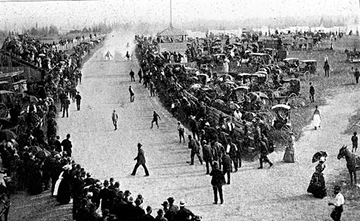 The most exciting race ever held at the fair

Dena Winslow, Ph.D. • May 4, 2022
“And they’rrrrre off,” boomed the deep voice of the announcer at the horse races held at the Northern Maine Fairgrounds for many years. Horse racing has been a significant part of summer and fall activities in northern Maine since it was held in the streets even before the first “North Aroostook Agricultural and Horticultural Society Cattle Show and Fair” was held Oct. 8-9, 1851.

“And they’rrrrre off,” boomed the deep voice of the announcer at the horse races held at the Northern Maine Fairgrounds for many years.

Horse racing has been a significant part of summer and fall activities in northern Maine since it was held in the streets even before the first “North Aroostook Agricultural and Horticultural Society Cattle Show and Fair” was held Oct. 8-9, 1851.

The sport was once so popular that the former owner of my house on State Street in Presque Isle told me that when the grandstand and fairgrounds were filled, local residents would bring lawn chairs and picnic lunches and sit in the third-floor attic of this house to watch out the big window.

But times change, and progress is inevitable. With crowds reportedly at more than 50,000 people in days past no longer attending races at the fair, it seems appropriate that the former track area be modified to meet current needs and interests of the community, as was recently announced.

There was great interest in horse racing in former days.  The famous race horse from the 1920s, John R. Braden, set records and was the only horse to visit the Northeastland Hotel in Presque Isle, where he was served oats in a silver bowl.  So famous and beloved was he that a street, a movie theater and even a cigar were named after him.

The beloved John R. Braden died unexpectedly on Nov. 20, 1929, and was buried in a cement vault in the infield of the current race track with a monument stone and flower garden — complete with a fountain — commemorating the location for many years.  The fountain and memorial garden were eventually removed, and the monument stone was relocated to a new spot on the fairgrounds behind the Forum building.  But the remains of the famous race horse are buried there still, under the present demolition derby area.

In the 1890s, there were a pair of horses that were equally, if not more famous, than John R. Braden.  Fort Fairfield was very proud of its horse, Fearless, and Presque Isle was equally proud of its horse, Bloodmont. Their races were not only between two well-matched horses, but were also friendly competitions between the towns.

No pictures have been located of Bloodmont, who was owned by Thomas Phair of Presque Isle, but the horse was described as a deep chestnut brown with a black mane and tail, a strongly built horse with a deep breast and broad, stout shoulders.  Fearless was described as being jet black with a high head, long neck, and erect ears. 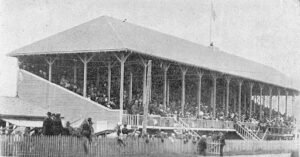 A large crowd gathers for horse racing at the Northern Maine Fair in this image from the 1918 fair premium book. The grandstand that exists today was built in 1912. (Courtesy of Dena Winslow)

With record-breaking crowds assembled to watch the highly anticipated 1893 race between these two horses, people climbed on the fences at the fairgrounds and stood in their carriages to try to get a better view of the racetrack.

“From the word go, all eyes were centered on these horses… For a while, it was neck to neck and nose to nose, as these horses passed the quarters [distance mark for the quarter miles] and made the first half mile.  All was silent, men and women held their breath as the horses passed the first and second quarters of the home stretch,” according to G.M. Park, who described the events of that day.

But Fearless broke as they headed neck and neck toward the finish line.  No one could have anticipated what happened next.

O. B. Griffin described the scene: “The crowd witnessed one of the most magnificent bursts of speed they had ever seen.  Fearless swept by the field, as if they were outclassed; as they passed the grandstand, he led the field around the turn out of sight while the grandstand crowd stood and tore things to pieces.  He did not appear again, but left the track, ran into a double wagon in which his owner, Jessie Drew, was standing, smashed the sulky to pieces and ran away uptown.”

Demonstrating outstanding sportsmanship, Thomas Phair withdrew Bloodmont from the race after Fearless ran off.  He said he did not want to win under those circumstances.  Reports were that the public nearly rioted because people were upset about this turn of events.

In 1894, both horses were at the starting line once again.  Interest was tremendous and even larger crowds assembled.

“It was by far the most exciting race ever witnessed upon the Fair grounds,” Park wrote. “ It was again, sometimes, neck and neck and nose to nose, till they were on the home stretch, when Bloodmont’s driver let him out and urged him on.  All eyes were on them, and Bloodmont took the lead – men and women cheered, threw up their hats, waved their handkerchiefs as Bloodmont passed under the wire and won the race handsomely.”

People cheered until they were hoarse, Park said, and as Bloodmont approached the judges’ stand ladies crowned him with a a collar of flowers.

To commemorate his horse’s victory, Phair offered to build a new grandstand and judges’ stand.  He paid $1,600 for them, and that grandstand was used until 1912, when the larger one was built which remains today.

Dena Winslow, Ph.D., is a historian who lives in Presque Isle.

A familiar face to Aroostook County residents has announced her candidacy for the Maine State Senate.
Pets END_OF_DOCUMENT_TOKEN_TO_BE_REPLACED

When 14-year-old Isaiah Belyea of Caribou began volunteering for Halfway Home Pet Rescue three years ago, he never imagined that his love for animals would quickly turn into a budding career.
What's Happening This Week END_OF_DOCUMENT_TOKEN_TO_BE_REPLACED