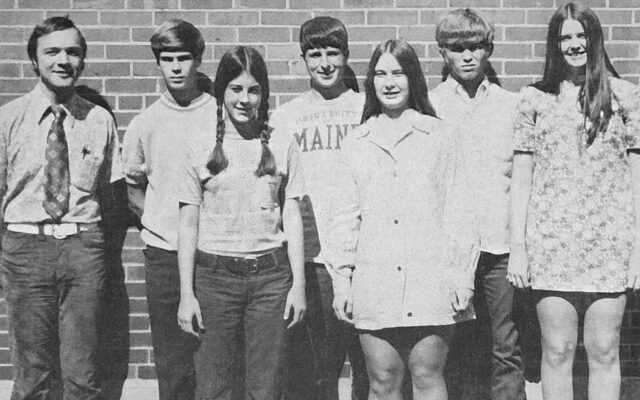 Cheerleaders’ squad selected at high school — Jessie Gagnon, head cheerleader of Presque Isle High School the previous year, was chosen to lead the squad, and four new cheerleaders were named at a rally. The new cheerleaders were Caroline White, Marion Brown and Joan Rowe, seniors, and Mona Johnson, junior. The girls were selected from a group of 12 candidates, and were judged by Miss Mary McConnell, Arnold Stinchfield and Coach William Hanscom, representing the faculty, and Dana Dickey, president of the Student Council.

Official plaque presented — Local Kiwanians met at the Northeastland Hotel Oct. 3 for their noon meal and meeting. 1972 president G. Melvin Hovey turned over the gavel to incoming president, Gerald Gallagher. Gallagher then presented a past president’s plaque to Hovey. Gary Bowden, a University of Maine at Presque Isle freshman, was the speaker.

Sirois got First National job promotion — M. C. Locke, vice chairman of the First National Bank of Aroostook, announced that Gary B. Sirois was promoted to the position of assistant vice president and manager of the Fort Fairfield office. Sirois, who assumed his new position, had been associated with the bank for the previous two years in the capacity of loan officer. He was a Caribou native, a graduate of Caribou High School and a veteran of three years in the U.S. Navy.

A new U.S. citizen — Mrs. Margaret Estey, 101, was given the oath of United States citizenship at her Fort Fairfield home by Eugene Fitzpatrick, distinct director of the U.S. Department of Justice’s Immigration and Naturalization Service. A native of Fredericton, New Brunswick, she came to live in Fort Fairfield in 1926 and had lived here ever since. She turned 101 on June 22. On hand for the ceremony were her children and grandchildren plus other immigration and town officials.

Men’s team won cross country — The University of Maine at Presque Isle men’s cross country team picked up a one-point win over Unity College at their only home meet of the year. The Owls ended with 42 points, with Unity right behind with 43. The University of New England and Maine Maritime Academy followed. St. Joseph’s College and Thomas College did not have full squads.

Next year's Caribou City Council will include a new member and a longtime councilor thanks to Tuesday's election.
Pets END_OF_DOCUMENT_TOKEN_TO_BE_REPLACED

The snow and the cold weather has arrived. If we listen to everyone it is going to be a difficult winter.
What's Happening This Week END_OF_DOCUMENT_TOKEN_TO_BE_REPLACED