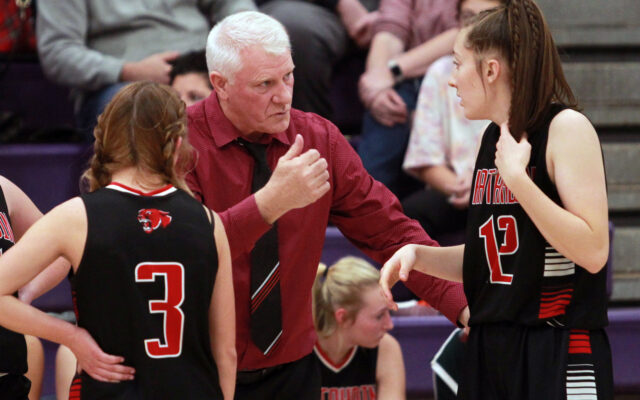 Joseph Cyr • January 11, 2023
After a brief holiday break, basketball squads were back in action with a bundle of games played

After a brief holiday break, basketball squads were back in action with a bundle of games played. The following is a recap of those games reported to the newspaper.

Katahdin 97, Washburn 27 – At Stacyville Dec. 27, the Washburn Beavers traveled to Stacyville for an afternoon boys game. The Cougars jumped to an early lead and never looked back.

Katahdin’s Grady Ritchie led all scorers with 32 points followed by Josh Martin with 13; Kyle McNally with 12; and Connor Edwards with 11. For Washburn, Derek Cruz tallied 10 points.

Hodgdon 48, Easton 40 – At Hodgdon Jan. 4, a fourth-quarter eruption blasted the Hawks past Easton. The Bears led 13-9 at the end of the first quarter, but Hodgdon took a 21-20 lead into halftime. The two squads were knotted at 29-29 after three quarters of action before the Hawks went on a 19-11 run to win the game.

Drew Duttweiler poured in 23 points to lead the Hawks, while David Tuttle and Brody Little both had nine and Caleb Tuttle added seven.

For Easton, Evan Carver led the way with 16 points, followed by Gus Bonner with eight; Raiden Cochran, six; and Chase Flewelling and Ben Wipperman, both five.

Katahdin 50, Washburn 30 – At Stacyville Dec. 27, the Cougars won their first of the season thanks to a 20-point effort from Hunter Hartsgrove. Mackenzie Landry chipped in 10 for Katahdin.

For Washburn Logan Curtis was leading scorer with 15 points.

Presque Isle’s scorers were not reported.

Houlton 55, Belfast 37 – At Belfast Dec. 29, the Shires rolled to victory over the host-Lions, ending a three-game losing streak for Houlton. Amelia Callnan led the Shires with 21 points, while Kaitlyn Kenney chipped in 10 points and Swallow added eight.

Belfast scoring was not reported.

Katahdin 60, Van Buren 32 – At Stacyville Saturday, Jan. 6, Hunter Hartsgrove allied 30 points in a dominant effort against Van Buren. Abbie Cormier had 22 to lead the Crusaders, while Mallory Beaulieu had 10.

Hodgdon 60, Katahdin 37 – At Hodgdon Monday, Jan. 9, Hodgdon soared to the 23 point victory over visiting Katahdin thanks to an 18-point effort from Anna Oliver. Aleyah Matheson chipped in 13 points, while Sadie Thompson added 12 for the Hawks.

The Hawks drilled eight 3-pointers in the contest, including four from Thompson.

Hodgdon converted two of seven free throws, while Katahdin made 11 of 17 foul shots.

Next year's Caribou City Council will include a new member and a longtime councilor thanks to Tuesday's election.
Pets END_OF_DOCUMENT_TOKEN_TO_BE_REPLACED

When I wrote the first story of our dog Odie, I didn’t know that I would write a Part 2, but there were so many more stories that I decided more of this little dog’s story needed to be told.
What's Happening This Week END_OF_DOCUMENT_TOKEN_TO_BE_REPLACED