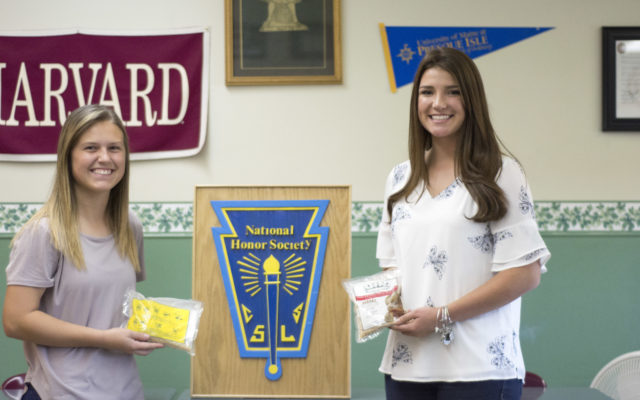 CARIBOU, Maine — After the success of an early 2017 End Hunger event, in which members of the Caribou community, the National Honor Society, Catholic Charities, and End Hunger Northeast packed over 26,000 meals for County residents going hungry, NHS members are planning another event with a higher goal.

Caribou High School seniors Gabrielle Marquis and Ashley Matlock have since taken on positions as co-chairs for next year’s End Hunger event, and have set the goal of raising $6,800 this year, which would feed 27,200 people in The County, or 1,200 more than last year’s event.

“It’s such a great event for our community,” Marquis said. “Everything goes to people in Aroostook County, everyone in the community comes together to help out.”

With this being the second End Hunger event, Marquis said it has been much easier to contact businesses for donations and that many have reached out to them first.

“We have businesses from last year,” Marquis said, “such as United Way, Associated Grocers, and Sleepers, that are willing to donate and help out with our packaging event.”

Marquis added that every dollar donated will create “four meals that we package and send to residents who are hunger insecure in Aroostook County.”

The 2018 packing event is scheduled for Feb. 2 at the Caribou High School Ski Center. Like the first event, meals will include macaroni and cheese, and tomato and basil pasta.

Matlock said she decided to become co-chair after helping with the first event.

“Overall, you have a great feeling when you help out,” Matlock said. “Many people don’t know where their next meal is coming from, or even if there is a next meal. It’s always nice to know you’re doing something good for The County.”

National Honor Society Adviser Ken Atcheson said Catholic Charities will help distribute the meals to every food bank in Aroostook, adding that Dixie Shaw, director of Hunger & Relief Services at Catholic Charities, is already on board with the project.

Atcheson said that last year’s event was immensely successful and that students ended up packing the meals faster than anticipated, which meant he had to send everyone back to class.

“I tried to delay it,” Atcheson said, joking that he was “not the most popular person at Caribou High School” after he sent the students back to school.

“They were great,” he said. “I am so proud of them and of our community.”

Marquis said it was “enlightening” to see how many businesses wanted to come back after helping with the previous event.

“They were just excited to help out,” Marquis said.

“That means, in my classes of 20 students, five don’t know if they’re going to have a meal,” Atcheson said.

Marquis said it was that statistic that motivated her to get involved.

“That was a big driving factor,” she said. “I think that pushed all of us to give some extra money and go the extra step.”

“They really felt good about this,” said Atcheson, referring to the first food-packing project. “It’s important to know that you are part of a community and not an island unto yourself; you are your brother’s keeper.”

Just when we thought we were out of the woods with kitten season, it has hit full force.  The past few days have been difficult answering the phone and hearing the stories of why people have litters of kittens they need to surrender.
Campaign Corner END_OF_DOCUMENT_TOKEN_TO_BE_REPLACED